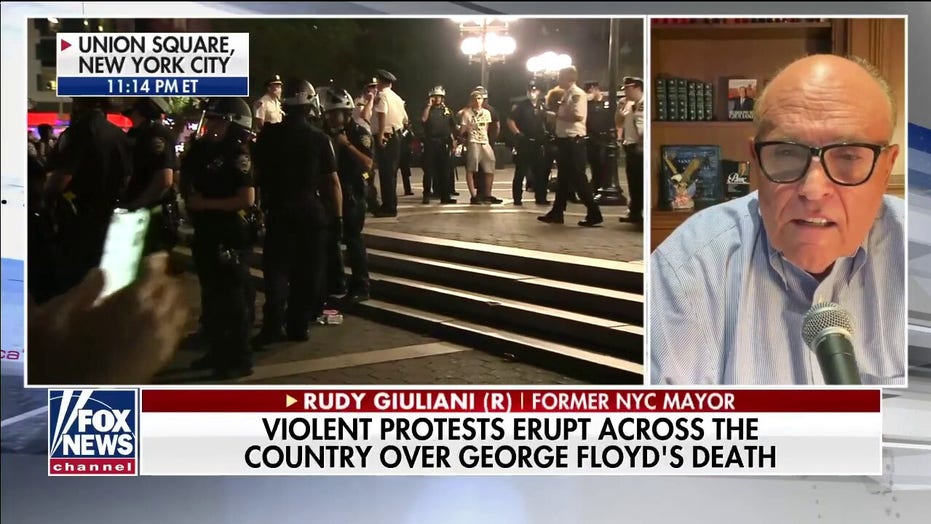 Giuliani shared his observations on Fox News' "America's News HQ," where he also monitored live coverage of protests in his hometown.

ST. PAUL MAYOR WALKS BACK CLAIM THAT ALL ARRESTED IN RIOT WERE FROM OUT OF STATE: 'I TAKE FULL RESPONSIBILITY'

"Cities run -- and I'm sorry to get political -- cities run by progressives don't know how to police. I'm sorry," Giuliani said. "Thirty cities went up last night, I went and looked at every one of them. Every one of them has a progressive Democratic mayor."

A cell phone video that went viral last week showed Floyd lying in the street with his head turned to the side as Minneapolis police Officer Derek Chauvin has his knee pressed to the back of Floyd's neck for several minutes.

Floyd is seen gasping for air and begging Chauvin to stop as bystanders are heard shouting at Chauvin to take his knee off Floyd's neck.

Chauvin has since been fired, arrested and charged with third-degree murder and manslaughter. Three other officers were fired and may face charges as well, authorities have said.

"The shame of this is nobody disagrees. Nobody white, black or in-between disagrees. What happened to Mr. Floyd is an outrage," Giuliani told anchor Harris Faulkner. "The shame of it, Harris, this is something that could have united us."

Giuliani said he usually doesn't prejudge police cases but he couldn't "not react" to Chauvin's actions recorded on the video, calling them "indescribable."

Giuliani added that the riots across the U.S. were a "desecration" of Floyd's memory.