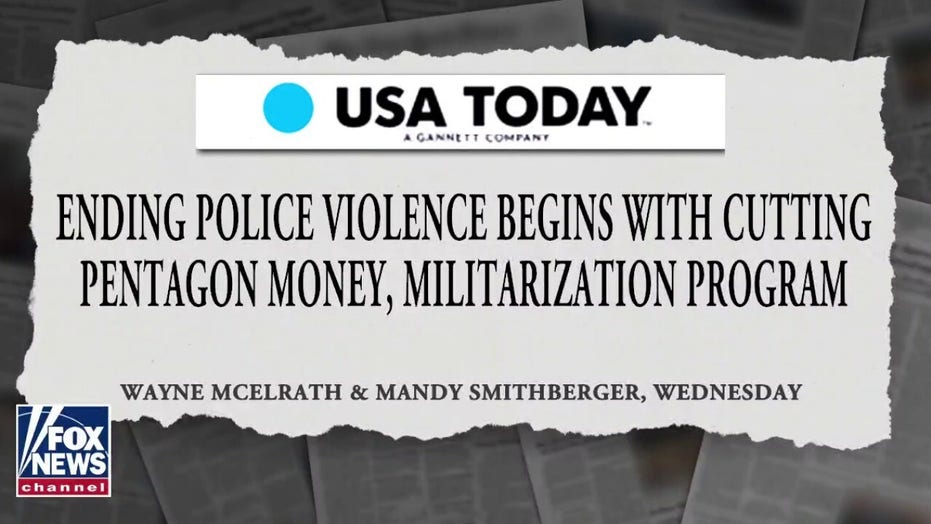 In an interview on "Fox & Friends" with host Brian Kilmeade, Keane said that the "defense buildup" America has seen under the Trump administration is "essential" to that mission, and needs to be continued for a "number of years." That includes giving police departments access to military equipment.

On Wednesday, USA Today Opinion contributors Wayne McElrath and Mandy Smithberger wrote that the Pentagon's influence on community policing – including the introduction of "armored vehicles," "military-grade protections" and gear – is a "tangible sign of the divide between the police and the people" and that "throwing weapons and money at problems" usually "makes things much worse."

"Police culture will never change as long as we’re putting military-grade weapons in the hands of individual law enforcement officers. But we’ve been doing just that for so long that the country’s militarized response to protests shouldn’t come as a surprise," they said.

"Unfortunately, decades of bloated Pentagon budgets and war have contributed materially and culturally to the militarization of local police departments across the USA," the article continued. "The resources and equipment that trickle down from the Pentagon have figuratively, and literally, brought our foreign wars home.

"However, curtailing Pentagon budgets and reforming ineffective programs like this one are steps that our government can take right now — through legislation like the National Defense Authorization Act moving through Congress," they urged.

A demonstrator carrying water approaches as line of police as during a protest over the death of George Floyd, Wednesday, June 3, 2020, near the White House in Washington. Floyd died after being restrained by Minneapolis police officers. (AP Photo/Manuel Balce Ceneta)

Keane said that he would "take a knee" to make sure police chiefs had access to the equipment necessary to assist in their duties to protect their own people and "also to send a message at times."

"And certainly, is there a militarization going on?" he asked. "Yes, yes certainly."

"But, a lot of the people who are committing crimes and have guns are using not just pistols, they're using assault rifles against police. And, not only that but they're using penetration bullets that actually go through our armored vests," said Keane.

"And, that's why they use vehicles to help shield them and protect them when they're dealing with an organization or people who actually [are] acting like insurgents more than just criminals."

Esper's stance is at odds with President Trump, who had spoken of invoking the Insurrection Act in order to use active-duty forces on the streets of the nation's capital during protests in late May and early June.

Several active-duty units were put on alert but ultimately were not deployed in Washington, D.C.

"Using active-duty forces in a direct civilian law enforcement role should remain a last resort, and exercised only in the most urgent and dire of situations," Esper said in a statement prepared for Thursday's hearing. "I want to make very clear that no active-duty military units engaged protesters or otherwise took a direct part in civilian law enforcement or federal protection missions in the District of Columbia or anywhere else in the country."