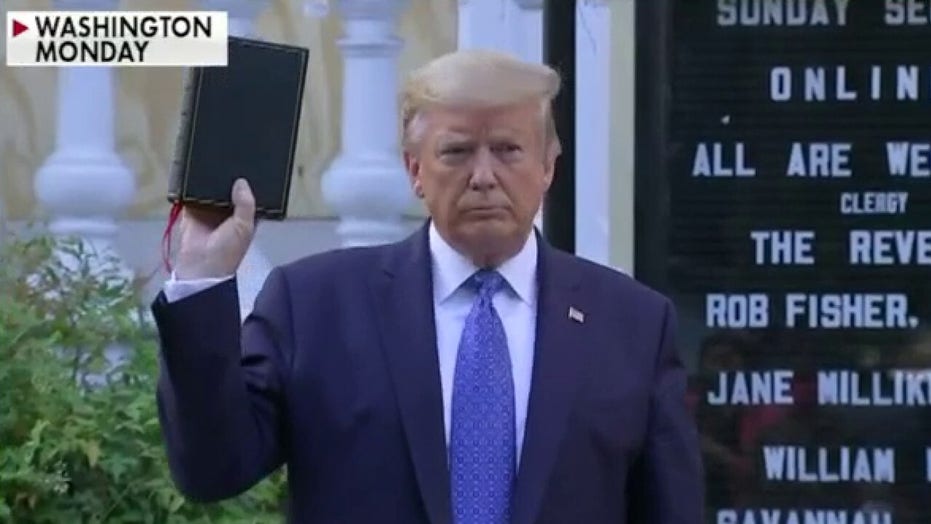 President Trump under fire for treatment of White House protesters

Top Democrats accuse President Trump of fanning the flames of discord; reaction and analysis on 'The Five.'

"The Five" began Tuesday's program by reacting to the latest riots that followed protests over the death of George Floyd and analyzing President Trump's much-criticized walk from the White House to St. John's Church Monday evening.

Co-host Dana Perino called Trump's visit to the church a great idea that was "not executed well."

"I don't think that people intended to use it as a photo op. I believe that the president was trying to show resilience, that America is not going to be taken over by people who would actually set fire to St. John's," Perino said. " ... The execution of all of that became the story today when we should really ... talk about the actual horrible destruction of America's great cities, especially New York City."

TRUMP UNLOADS ON GOVERNORS OVER PROTEST RESPONSE, CALLS THEM 'WEAK'

During the brief visit to the boarded-up church -- part of which was set on fire the night before -- Trump posed for the cameras while holding up a Bible.

Before Trump left the White House, authorities used smoke canisters and pepper balls to clear the park of protesters.

Co-host Jesse Watters dismissed the criticism that peaceful protesters were attacked, claiming that they don't deserve the benefit of the doubt after many American cities have been ravaged by riots and looting.

"They've shown no ability to be trusted at this point, killing cops now, punching people in the face for no reason. They're trying to protest violence against an innocent man, and yet they're committing violence on innocent men and women. It's disgusting. This country has had enough of it," Watters said. "And this fake scandal is just another frame job of the president while the rest of the country agrees with everything he did."

Co-host Greg Gutfeld said those who were looting and rioting were doing so for the thrill of it.

"There's this myth that that anger is driving this. There was no anger on the faces of the looters in my neighborhood on Sunday night. They were having a blast. And the unspoken truth about all of this is that it's fun," Gutfeld said. "You're going out in an organized fashion. You're beating the crap out of people. You're taking stuff. This is not about George Floyd. This is about '28 Days Later.' This is about the 'Dawn of the Dead.'"

Gutfeld then raised the possibility of riots taking place for weeks and months on end.