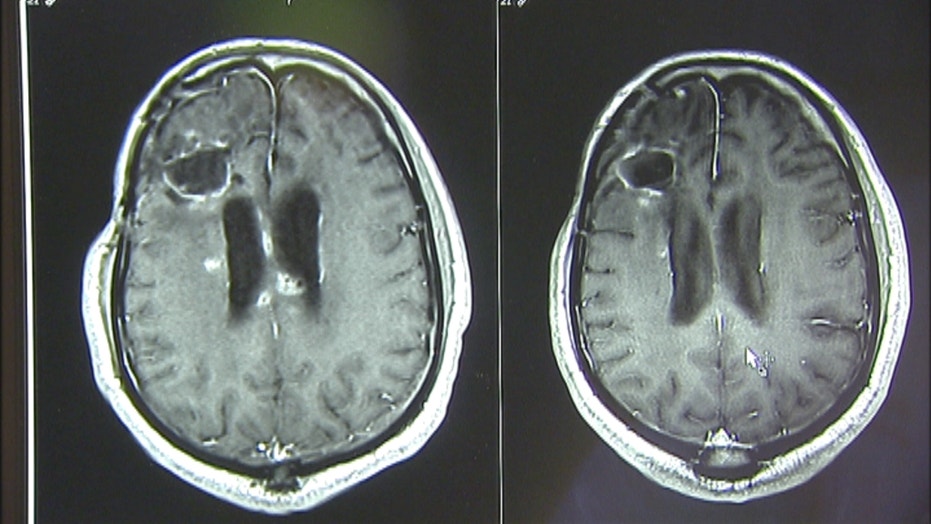 Survival for patients suffering from glioblastoma, a deadly form of brain cancer, is often measured in months. But a new device is offering hope and improving quality of life by shrinking tumors without the need for chemotherapy and radiation treatments

For patients living with a deadly form of brain cancer called glioblastoma, survival is often measured in months. That was the prognosis 50-year-old Robert Townsend was faced with when he was diagnosed with the disease in 2009.

Aside from some occasional headaches, Townsend, who had already survived colon cancer, didn’t recall having any alarming symptoms in the beginning. But when his cousin Jack Moore came to visit, he noticed something wasn’t quite right.

“You could see … his face was like swelling and … he has this little puffy thing that happens under his eyes, and it had extended into his cheeks and the whole nine yards,” Moore told FoxNews.com.

Moore took Townsend to Metropolitan Hospital in New York, but he was quickly transferred Bellevue Hospital Center when a CT scan revealed the tumor in his brain.

The surgery and treatments helped him remain stable for years, but because doctors could not remove all of the tumor, the cancer started wreaking havoc on his health again.

Moore watched his once vibrant cousin fade away – drained from his treatments and now suffering from diabetes and high blood pressure in addition to cancer.

“He was totally just, lethargic, just he would sleep for most of the day,” Moore said. “This is in the hospitals, in the recovery health care place, and at home. There was nothing. He was just so drained.”

While chemotherapy has proven to be an effective therapy for many cancers, the toxicity of the drugs have been known to cause a variety of side effects including nausea, memory problems, fatigue, digestive issues, blood disorders, nerve damage, hair loss, reproductive issues, loss of appetite, pain and sores in the mouth and throat. It becomes a quality of life issue for patients like suffering from glioblastoma, whose median survival is typically between 15 and 18 months.

“He wasn't cooking, he wasn’t eating on his own, I would prep all his meals breakfast, lunch, dinner before he left … and have them set and ready,” said Moore.

It became overwhelming for Moore, who was working full time and shuttling Townsend back and forth to countless doctor appointments, treatments and scans – but he never gave up on his cousin.

Townsend was no longer able to see his doctors at Bellevue after Hurricane Sandy ripped through New York City in October of 2012, shuttering the doors of the flooded hospital for months. By that time, Townsend had developed diabetes and high blood pressure in addition to his cancer, so he was in a rehabilitation center in New Jersey when his oncologist referred him to Dr. Samuel Goldlust, medical director of the Brain and Spine Institute at the John Theurer Cancer Center at Hackensack University Medical Center.

Goldlust thought Townsend might be a good candidate for a new device called the NovoTTF-100A system – which was still in the experimental phase at the time.

Clinical trials of the NovoTTF-100A system looked at several hundred patients with recurrent glioblastoma and compared them to a group of patients receiving a chemotherapy regimen that was the standard in glioblastoma treatment for years. What they found was that the survival of the patients in both groups was comparable, but the patients in the device group saw an improved quality of life with less side effects and increased tolerability.

“I think it's appealing to a lot of patients and there's very seldom a patient that comes in that I don't think should at least be considered for the therapy,” Goldlust said.

A potential side effect of using the NovoTTF-100A is skin irritation where the device adheres to the scalp, Goldlust noted, but said doctors closely monitor patients and educate their families and caregivers on how prevent it.

Patients are urged to wear the device for 75 percent of the time. The NovoTTF-100A is FDA approved for recurrent glioblastoma, but the company who makes the device, Novocure, is working to speed approval for newly diagnosed patients as well. In fact, a clinical trial looking at newly diagnosed glioblastoma patients receiving standard chemotherapy and radiation versus those receiving standard therapy with the addition of the device was cut short when an independent monitoring committee observed a survival benefit of those using the device was so evident, it seemed unethical to deprive the standard therapy group of the combination treatment.

Townsend began wearing the device in May 2014.

“His first scan was stable which was a good outcome, and then by the time he had a second and third scan, his tumors had started to shrink considerably,” Goldlust said. “He’s now been under our care for several years, if you're one that looks statistics, we unfortunately don't expect someone with a recurrent tumor to be with us more than a time measured in months -- and often not very many months -- so he's had a tremendous response.”

Getting back on track

Within a month of starting his care with the new device, Townsend was able to stop chemotherapy and radiation treatments altogether.

“I could get back on track with the rest of my life -- physically, getting myself back in shape, and mentally,” said Townsend. “And I'm a year past my expiration date.”

Using the device has also drastically cut down on doctor visits and eliminated the balancing act of trying to squeeze schedule doctor appointments into the work week, Moore said.

While Townsend looks to get back to doing the things he once loved, Moore said the change he’s seen in his cousin is incredible.

“His mind is active again, his body is active again – there’s not this fight now to just get up out of bed in the morning,” he said. “Knowing that now he doesn’t have – and I’ll use his terminology – an expiration date, is just, it’s a wonderful thing.”

For more information, check out Novocure.com.