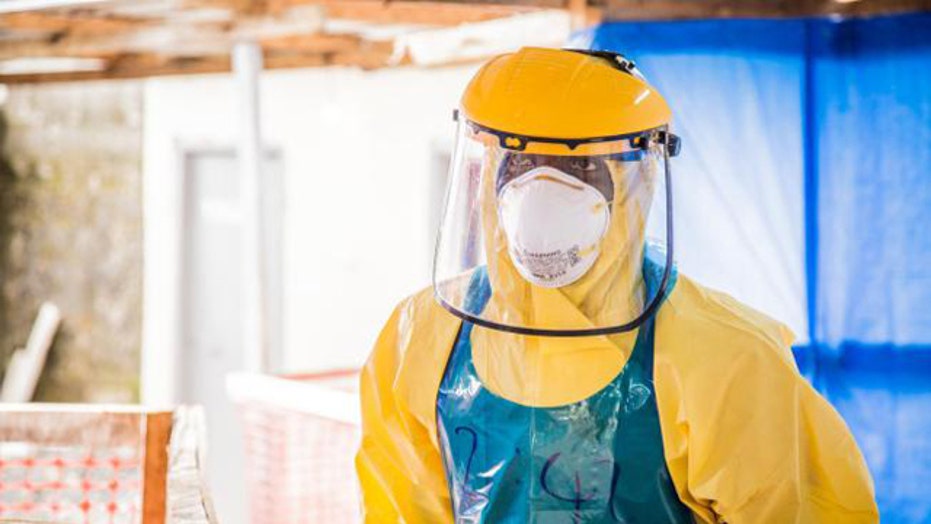 Will they keep medical workers safe?

Ebola fears began to ease for some Monday as the monitoring period passed for 48 people who had close contact with a victim of the disease, and after a patient being treated for the virus at an Atlanta hospital was discharged.

Emory University Hospital officials said Monday that a patient admitted on Sept. 9 with the Ebola virus has been discharged. The patient elected to remain anonymous, and has only been identified as a doctor who was working with the World Health Organization (WHO) in Sierra Leone.

"In coordination with the CDC and Georgia Department of Public Health, the patient was determined to be free of virus and to pose no public health threat. The patient has asked to remain anonymous, and left the hospital for an undisclosed location. He will make a statement at a later date," the hospital said in a statement.

Federal officials meanwhile ramped up readiness to deal with the possibility of future cases. A top government official said revised guidance instructs health care workers treating Ebola patients to wear protective gear "with no skin showing." The Pentagon said it is forming a team to support civilian medical staff in the U.S.

On Monday, Dallas officials said they are continuing to monitor 120 people for symptoms of Ebola after two nurses who treated the first Ebola patient diagnosed in the U.S. came down with the disease. If no one becomes ill by Nov. 7, officials said they believe the additional contacts will be in the clear.

In Dallas, Louise Troh and several friends and family members will finally be free to leave a stranger’s home where they have been confined under armed guard for 21 days – the maximum incubation period for Ebola. They had close contact with Thomas Eric Duncan, a Liberian man who died of the disease at Texas Health Presbyterian Hospital on Oct. 8.

“I want to breathe, I want to really grieve, I want privacy with my family,” Troh told The Associated Press on Friday, lamenting that she had missed Duncan’s memorial service at his mother’s church in North Carolina because of the quarantine. Troh says she and Duncan planned to get married later in the week.

The incubation period has also passed for about a dozen health workers who encountered Duncan when he went to the Dallas hospital for the first time, on Sept. 25. He complained of a headache and stomach pain, and was given a prescription for antibiotics to treat a misdiagnosed sinus infection.

Duncan was sent home but returned by ambulance on Sept. 28 and was admitted.

The day Duncan tested positive for Ebola, Troh, her 13-year-old son, Duncan’s nephew and a family friend were ordered by a Dallas court to stay inside the apartment among Duncan’s used linens and any lingering virus. The unusual confinement order was imposed after the family failed to comply with a request not to leave the apartment, Dallas County Judge Clay Jenkins said. The four were later taken to an undisclosed gated community.

Two nurses who treated Duncan when he was admitted – Nina Pham and Amber Vinson – are now hospitalized with Ebola.

Vinson’s family issued a statement Sunday saying they have hired a lawyer and are troubled by comments and media coverage that “mischaracterize” Vinson, who is being treated at Emory University in Atlanta. Vinson “has not and would not knowingly expose herself or anyone else,” the statement said.

Ohio officials reported that the state has three people under quarantine and identified 142 total individuals who may have had contact with Vinson. There are no confirmed Ebola cases in Ohio.

Dallas County and Centers for Disease Control and Prevention (CDC) officials cleared Vinson to fly last week to Dallas from Ohio, and “suggestions that she ignored any of the physician and government-provided protocols recommended to her are patently untrue and hurtful,” the family said.

On Sunday, a cruise ship scare ended with the boat returning to port and a lab worker on board testing negative for the virus. The Carnival Cruise Lines ship returned to Galveston, Texas, from a seven-day trip marred by worries over a health worker on board who was being monitored for Ebola. The lab supervisor had handled a specimen from Duncan and isolated herself on the ship as a precaution.

About 4,000 passengers on the cruise had to miss a stop in Cozumel, Mexico, where the boat was not allowed to dock because of the scare. Carnival said it was informed by U.S. health authorities Sunday morning that the worker tested negative for Ebola.

Dr. Anthony Fauci, head of the National Institute of Allergy and Infectious Diseases, said those caring for Duncan were vulnerable because some of their skin was exposed.

The CDC is working on revisions to safety protocols. Earlier ones, Fauci said, were based on a WHO model for care in remote places, often outdoors, and without intensive training for health workers.

“So there were parts about that protocol that left vulnerability, parts of the skin that were open,” Fauci said.

Health officials had previously allowed hospitals some flexibility to use available covering when dealing with suspected Ebola patients. The new guidelines are expected to set firmer standards calling for full-body suits and hoods that protect workers' necks; setting rigorous rules for removal of equipment and disinfection of hands; and requiring a “site manager” to supervise the putting on and taking off of equipment.

The guidelines also are expected to require a "buddy system" in which workers check each other as they come in and go out, according to an official who was familiar with the guidelines, but not authorized to discuss them before their release.

Hospital workers also will be expected to exhaustively practice getting in and out of the equipment, the official said.

Nurses have been clamoring for more guidance and better garb, saying they have never cared for Ebola patients before and feel unprepared and underequipped.

"If hospital administrators had to take care of Ebola patients, they would have the gold standard and hazmat suits," said RoseAnn DeMoro, executive director of National Nurses United, a union with 185,000 members.

In some places where they have the suits, nurses have not practiced taking them on and off.

"The hospital is sending them essentially a link to the CDC website. That's not preparation. That's like a do-it-yourself manual," DeMoro said.