Man rescues bald eagle from drowning in lake in amazing video: 'Had to prove to my son I'm cool'

A man in British Columbia rescued a young bald eagle from drowning in Lake Windermere on Fourth of July – an achievement he said he will use to boast about to his son.

Brett Bacon was on a boat ride with his family when they saw the giant bird struggling in the water, the New York Post reported.

Quickly, Bacon reached over to try and save the creature from dying, only to pull it out and realize it was a “juvenile” bald eagle.

“When I pulled it out of the water, I was like, ‘holy s- -t, this is a big bird.’ And then I saw his feet,” Bacon told The Post, noting the large talons on the bird of prey.

After he scooped out the bird, Bacon is seen sitting with it on the side of the boat trying to keep it calm while his partner Lindsey filmed him.

“I almost was like, ‘turn off the camera like help me do this!'” Bacon said to The Post. “But she kept filming, luckily, and it kind of all came together.” 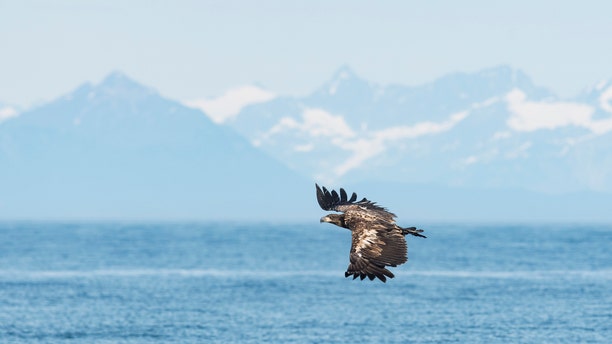 The man rescued the juvenile bald eagle from the lake waters. (iStock)

The video of the rescue was posted to Bacon’s account, where it has been shared widely. Altogether, the video has nearly 2 million views across multiple platforms.

“Happy 4th of July[.] Saved a baby eagle from drowning in the middle of the lake, had to prove to my son I’m cool,” the Instagram caption for the video read.

Though the praise has come in far and wide on social media, calling the man a “legend” for his effort – there was at least one person whose support he didn’t seem to get: his son’s.

“[Brooks] was so unfazed,” he said to The Post.

In video of the footage, his baby boy can be seen sleepy soundly – unaware of his dad’s impressive save.

“So, I’ll have to show that video to them when he’s a little older,” he added.

The eagle was reportedly brought back to shore safely and taken to a facility for care, until it can safely be released back into the wild.