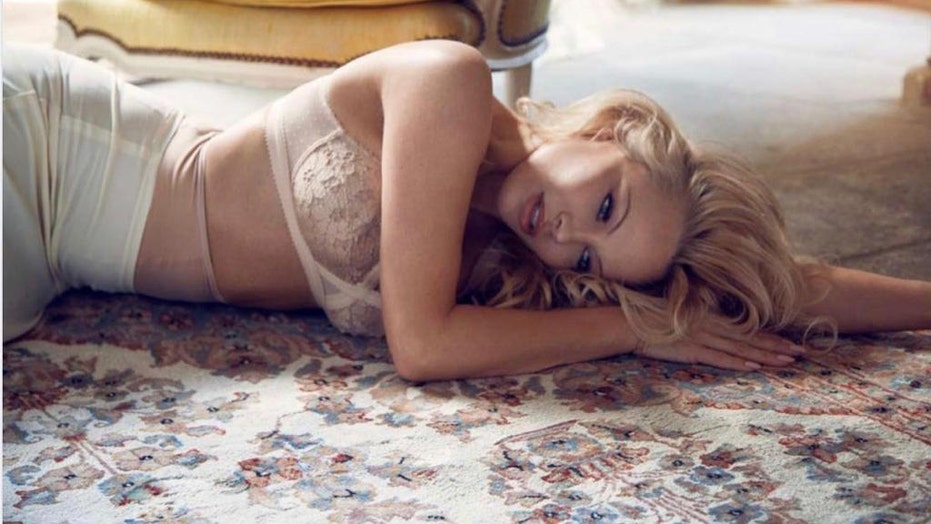 EXCLUSIVE: She may be the world's most famous sex symbol of our time, but in an exclusive interview with Fox News, Pamela Anderson affirms she's still a romantic at heart.

At 52, the blonde bombshell has quite the resume. She's graced the cover of Playboy a total of 14 times -- more than any other woman in the magazine's history. Her years-long stint as C.J. Parker on "Baywatch" upped her sex appeal another notch in the '90s. She's also an animal activist, proud mother of two sons and, as the world may well know, has been married -- and divorced -- a few times.

Through it all, Anderson reminded us that love has been the common denominator in everything she does, even amidst heartbreak.

"I'm a romantic so I'm old school," Anderson told Fox News in an interview from her ranch in Vancouver, Canada this week. "I believe in love. I'll never give up."

Navigating through life as a passionate romantic hasn't always been easy, Anderson knows. She admits she used to be "concerned" with the dangers of social media and dating apps ditching the old-school mentality of meeting prospective partners through face-to-face interactions and chance encounters.

But thanks to the Playboy alum's new role as the creative director of Jasmin, a webcamming site that launched last week, she's now a firm believer that relationships, whether romantic or platonic, can be supported through positive online interactions.

"I was misunderstood in the beginning [about webcamming] and a little bit concerned," Anderson admitted. "But once I got involved with Jasmin I realized how great it is and how it helps people. With this, I've thought maybe it's time to embrace technology and have it be a part of our relationships, a part of our friendships. It can complement relationships instead of being this kind of secret world that a lot of people have on social media."

Pamela Anderson has taken on the new role of creative director for Jasmin. (Janet Ross)

As creative director, Anderson will have the opportunity to go live with members of the Jasmin community from all over the world as she doles out advice on the topics of romance, sex positivity, intimacy, friendships, and more.

PAMELA ANDERSON'S MARRIAGES: A LOOK BACK

"It's a great opportunity to talk about anything people feel passionate about, from activism to health and beauty and romance and dating, just anything you can think of," Anderson shared. "I'm really excited about it."

And who better to discuss a person's image insecurities, fears and desires than with a woman whose personal life has been picked apart and prodded at by strangers across the globe? She recalled her ideal relationship to Fox News while discussing how she's aiming to help others find their happiness.

"I like to be in a monogamous relationship," she said. "I think it's great if you can find the love of your life. But it might not just be across the room or on a train somewhere when your eyes meet. This is the way the world is right now. Instead of trying to deny it, why not embrace it and do all you can to find that person?"

Speaking of finding "the one," Anderson shared what it takes to impress her today.

"I believe in honesty and rawness and being authentic," she explained, adding that has become her vision at Jasmin.

THE LOVELY AND TALENTED PAMELA ANDERSON

Pamela Anderson has graced the cover of Playboy a total of 14 times. (Liz Rosa)

A peek at the Jasmin site shows the blonde beauty in sexy photos lying on a bed in lingerie, often in black and white, and captioned with her favorite poems. It's a far cry from the days where her figure and platinum blonde locks were juxtaposed onto glossy magazine covers. This "raw" and "unfiltered" look is her most "authentic" side, she said.

Anderson is currently quarantining alone at her ranch in Vancouver, the same home she grew up in. She purchased the property from her grandmother years ago and has spent her time in between her role at Jasmin by giving it a revamp.

"It's my art project. I always come here to get away from everything. I like solitude," Anderson shared. "I'm gardening, putting in landscaping, stuff like that. I'm really lucky and blessed that at this point in my life, this is what I wanted to be doing anyway on my own."

Still, Anderson acknowledges that Jasmin's launch comes at a unique time given the coronavirus pandemic. The global health crisis means she cannot see her sons she shares with ex Tommy Lee -- Brandon Thomas, 23, and Dylan Jagger, 22. She's paid a social-distancing visit to her parents, who live nearby in Vancouver, just once so far.

Pamela Anderson, 52, sits on her bed. She says her time at home is when she's her most "authentic" self. (Janet Ross)

The global health crisis will reportedly cause a spike in the divorce rate and can provoke insecurities, fears even, for those self-isolating with their partners for the first time. It also can exacerbate loneliness, which Anderson called a "pandemic" itself.

"People don't have to be lonely. It's devastating to a lot of people. Loneliness causes all these sorts of issues so humans need each other," Anderson said.

"I like to say humans aren't my favorite species, but I'm a human so, I try to encourage a more engaging experience because we do need each other," she added with a laugh.

For Anderson, turning to poetry, reading and writing, and utilizing Jasmin to engage with others has helped aid in her own isolation at the moment.

"It's very easy to isolate yourself when you're on your phone. Jasmin is a great site to start playing with and putting yourself out there. I'm trying to make a more engaging experience. If more people are happy, I think better things will happen for the world."