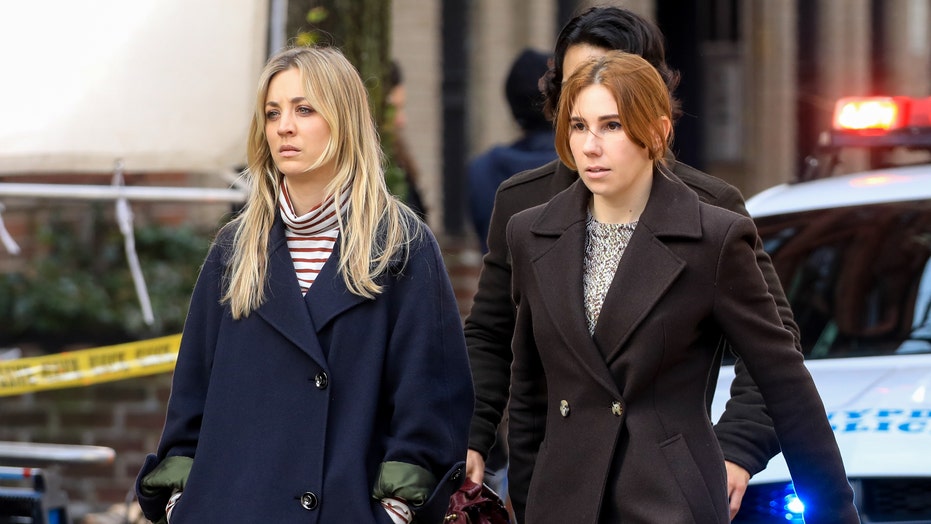 Kaley Cuoco and Zosia Mamet celebrated the end of filming their TV series, "The Flight Attendant," with special matching tattoos.

The actresses shared photos on Instagram of themselves getting inked in New York City to commemorate the completion of the upcoming HBO Max series.

A special little tribute to our wonderful little show" Cuoco, 34, wrote with a jetliner emoji.

The small tat is of a paper plane flying in a circle.

"The Big Bang Theory" star plays the lead role of Cassandra Bowden in the adaptation of the best-selling novel. In the story, Cassandra is possibly a murderer after someone winds up dead but she can't remember the events from the night prior.

Mamet wrote, "After a full year and many adventures together we decided to get a little memento. Thank you @evantattoo 💛#theflightattendant ✈️✨"

Last month, Cuoco shared a message about working on the project during the coronavirus pandemic.

She said that they were tested for the virus every few days, frequently washed hands and wore masks.

"This picture was taken right before we shot today’s scene in a very structured quarantined environment," she wrote. "Very proud of our cast and crew at #theflightattendant and everyone @warnerbrostv & @hbomax for making this possible for us!"

Mamet said in her own video from the last of filming: "That’s a wrap on season 1. Lots of tears. Sad and happy ones. I am so proud of what we’ve made and I feel such immense gratitude to have been a part of this show."

The "Girls" star said that she was incredibly lucky to do what she love during the pandemic.

"This experience was magical, she said. "During a time in our world that is quite dark this was a real light for me. I hope all of you out there are finding your light too."

"The Flight Attendant" is slated to premiere in November on HBO Max.