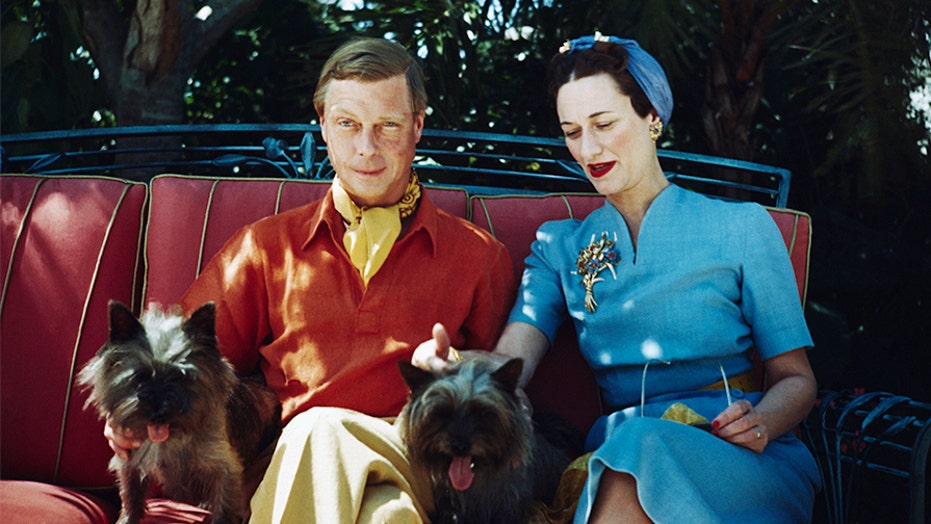 When Edward VIII passed away in 1972 at age 77, he seemingly left behind an epic love story of a British king who gave up the throne to marry the American woman he loved -- but in reality, it was far from a fairy tale.

The relationship between Edward and socialite Wallis Simpson is explored in Smithsonian Channel’s docuseries titled “Private Lives of the Monarchs,” which aims to uncover the “illicit affairs and secret scandals” hidden behind palace doors. It previously explored the life of Queen Elizabeth II’s younger sister, the late Princess Margaret, who was previously depicted by the press as a “playgirl” who wasn’t afraid to challenge tradition.

U.K.-based historian and royal author Tracy Borman, who is also the show’s host, told Fox News she was surprised to learn how obsessive the Duke of Windsor was over the divorcee.

“There’s a myth that he had one of history’s greatest love affairs -- but it is a myth,” she explained. “Giving up the throne for the love of a woman sounds incredibly romantic, but if you delve deep into Edward’s character and into his relationship with Wallis, you’ll realize that it’s not all as it appears. He was actually a very flawed character. He grew up with all sorts of insecurities. He was quite childlike when it came to women. And you definitely see that when it comes to his relationship with Wallis. She’s almost like a mother figure to Edward.”

QUEEN ELIZABETH'S 'CHRISTIAN FAITH MEANS SO MUCH TO HER’ AMID THE CORONAVIRUS PANDEMIC, SOURCE SAYS

The Duke and Duchess of Windsor arriving at the country home of Major Edward Dudley Metcalfe in Coleman's Hatch, Sussex, their first visit to England in three years, circa 1939. (Photo by Keystone/Getty Images)

According to her research, Borman learned that Simpson may have felt suffocated by the marriage, which lasted until Edward’s death. The couple originally tied the knot in 1937.

“You get this feeling that, while you should be deeply grateful that this man gave up the throne for you, she actually found him a bit too much,” said Borman. “She wants to get away from him and has an affair. I was just really shocked by all of that when we were doing some of the research for this series. It just wasn’t what I was expecting. I was expecting romance and great sacrifices. It turned out to be so different from that. Arguably, Edward did the best thing by abdicating the throne. I’m not sure he would have made a great king, to be honest.”

When Edward first met Simpson in the fall of 1930, she was still married to her second husband, American-born British shipbroker Ernest Simpson. For decades, Simpson was accused of trapping Edward in a seductive web as part of her plan to become queen.

But Borman suspects Edward had no desire to become king of England to begin with.

PRINCESS EUGENIE WAS WARNED TO 'PREPARE FOR THE WORST' DURING FATHER-IN-LAW'S CORONAVIRUS FIGHT: REPORT

“He was always looking for an excuse,” she shared. “He hated the attention. Hated being in the spotlight. He had a difficult relationship with his father. If it weren’t for Wallis, he might have used something else. I truly believe it would have been something else that would have made him give up the throne.”

According to her findings, it was Edward who quickly became captivated by Simpson. His affections towards her, even after their marriage, was described by Borman as “clingy and cloying.”

“He just wanted her all to himself,” said Borman. “He was quite suffocating when it came to his love for Wallis. That’s why there were rumors of her having an affair -- to escape. It would have been disastrous for the monarchy. He just wanted to be in her company all the time and it was very clear that for him, Wallis was everything. She was enough for him to give up the crown. It was a weight of responsibility lifted. But… all of this must have felt such a pressure for her to be everything that Edward wanted. He just wanted to be with her 24/7. They were hardly ever [apart]. And he quickly became quite jealous [if] she spoke to any other man.”

“Ironically, this suffocating behavior actually drove her from him,” Borman continued. “They obviously never separated, but it really made her want to have space because he was just desperate to possess her entirely. … He didn’t know how to act around others. He just wanted what he wanted. And when the government told him he couldn’t have Wallis, it became this huge obsession.”

MEGHAN MARKLE, PRINCE HARRY WILL FACE NEW CHALLENGES IN THE US AS THEY 'PUT DOWN ROOTS,' ROYAL EXPERTS WARN

The Duchess of Windsor wearing a gown, reclining on a chaise. (Photo by Horst P. Horst/Condé Nast via Getty Images)

Borman also pointed out that Edward was fascinated with Americans, which only lured him into further falling for Wallis. He would even practice speaking with an American accent and had clothes shipped to him from the U.S., which reportedly appalled his father, King George V.

“He admired the American dream -- that if you work hard enough for something if you really go for it, you can get whatever you want,” said Borman. “There was something in that hopeful characteristic of Americans that Edward fell completely in love with.”

After their marriage, Edward and Simpson lived in Paris but they hoped to return to England, the New York Times reported. But in 1940, he was given the governorship of the Bahamas, where the couple stayed for five years. Simpson kept busy by working for the Red Cross and raising money for charities. In 1961, she insisted that sending the duke to the Bahamas was really a scheme to get rid of him.

“My husband has been punished like a small boy who gets a spanking every day of his life for a single transgression,” she said at the time, as reported by the outlet.

A ROYAL EXIT: ROYALS WHO HAVE PULLED BACK FROM THE BRITISH MONARCHY

Still, the couple stayed together despite their differences, the outlet noted. They even went on to spend most of their time in urban settings despite Edward’s love of the countryside and gardening because she preferred cities. And while he didn’t care for social affairs, he still attended them with Simpson by his side.

The couple had no children and Simpson remained single for her final years. She passed away in 1986 at age 89.

Borman said she is aware that Meghan Markle, an American, is still compared to Simpson. However, she finds those comparisons unfair.

“It’s not like [her husband] Prince Harry has given up anything,” she pointed out. “He is way down in the order of succession. And people do want a different life, even members of the royal family. Not all necessarily want to be part of that strict protocol that comes with the role. It’s a real shame because she and Harry were a huge force of good for the monarchy. But I don’t blame them in [stepping back].”

PRINCE HARRY IS FRIENDLESS AND UNEMPLOYED IN LA, MISSES 'HAVING A STRUCTURE': REPORT

“I suppose that on a very simplistic level, yes, here is a British prince running off with an American and seemingly giving up everything for her,” she shared. “But that’s far-fetched. These are different times and two very different couples. Harry and Meghan are a solidly modern couple who don’t want to work within an ancient establishment. They yearn for privacy and family and just a life they can call their own. Just like the story of Edward and Wallis, the one of Meghan and Harry is much more complex.”

"Private Lives of the Monarchs" airs Sunday, May 24th at 8 p.m. EST on the Smithsonian Channel.