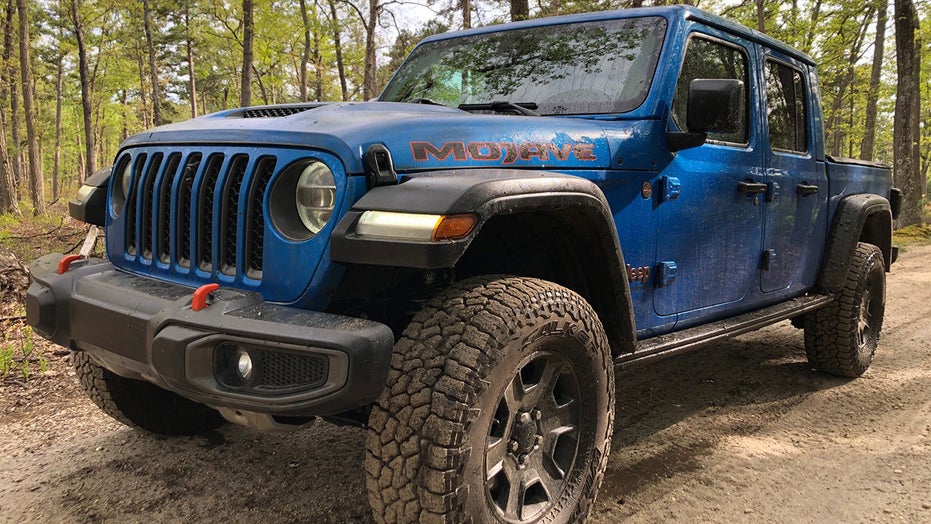 The Jeep Gladiator Mojave is the first 'Desert Rated' Jeep and was designed for high-speed off-road driving, especially on the sand, so that's where Fox News Autos Editor Gary Gastelu took it to try out.

Jeep has always been known for building off-roaders that can crawl over the toughest terrain, but now it has one that can run … and jump.

The Jeep Gladiator Mojave is the first “Desert Rated” version of the pickup, which is a new marketing term meant to indicate that it was engineered for the kind of high-speed driving you might do in its namesake locale.

The $45,370 Mojave is a different kind of beast than the identically priced “Trail Rated” Rubicon model and is the latest in a growing segment of high-performance off-road pickups that includes the larger Ford F-150 Raptor and smaller Chevrolet Colorado ZR2.

The Mojave’s frame has been strengthened at key points to better brace it for impacts, and its suspension equipped with remote-reservoir Fox shocks that can take on long rough roads while providing plenty of damping for leaps and bounds. If you do manage to bottom it out, a unique set of hydraulic jounce bumpers up front further cushion the landing.

It also gets a one-inch front lift to help you attack the bumps you’re about to use as launch pads, and a front bash plate for when you don’t quite make it. A half-inch wider track than other Gladiators adds stability and its standard 33-inch all-terrain tires on 17-inch wheels give it plenty of grip.

The Mojave gets the same 285 hp 3.6-liter V6 as other Gladiators, either with a six-speed manual or eight-speed automatic transmission. It doesn’t have a locking front differential or detachable swaybar that the Rubicon has, but it does have 11.6-inches of ground clearance, Jeep’s two-range Command-Trac transfer case and a rear locking differential that will be able to operate in 4x4 High after a software update later this year. That’ll be a first for a Jeep truck and should make it even better at sailing across deep sand. A softened set of rear springs limits the Mojave’s tow rating to 6,000 pounds, well short of the Gladiator Sport’s maximum 7,650-pound rating.

Mildly beefed-up bolsters on the front seats add some trophy truck flair, but the interior is otherwise the same as the other Gladiators and offers the most room of any midsize pickup. As is often the case with off-road packages, the Mohave’s ride comfort on the pavement is improved, although the knobby tires add to the already abundant wind noise created by its boxy body. That’s Jeep life, but it can be mitigated with niceties like extra insulation in the optional hardtop, leather upholstery and radar cruise control.

Unfortunately, a cross-country trip from New York to the closest desert wasn’t in the cards while I was testing the Mojave, but nearby New Jersey has a little bit of everything, including hundreds of miles of sandy public roads traversing its pine barren forests.

There, the Mojave lived up to its billing, tearing down torn-up trails without breaking a sweat -- or anything else -- and taking on big dips just as easily. I’m not sure if I managed to get it fully airborne, but coming down hard with the suspension at full droop never resulted in the kind of pain and painful sounds delivered by a typical off-road pickup.

The Mojave doesn’t give up much on the slow stuff, either. Its crawl ratio isn't as aggressive as the Rubicon’s, but its suspension articulation is right there with it and it can probably handle 95 percent of the trails that its stablemate can. It is even available with the Rubicon’s front-facing trail camera, which has its own spray washer, because you’ll need it.

Of course, that 5 percent matters a lot to some people, but for everyone else, the Mojave should prove to be an oasis of high-speed fun.