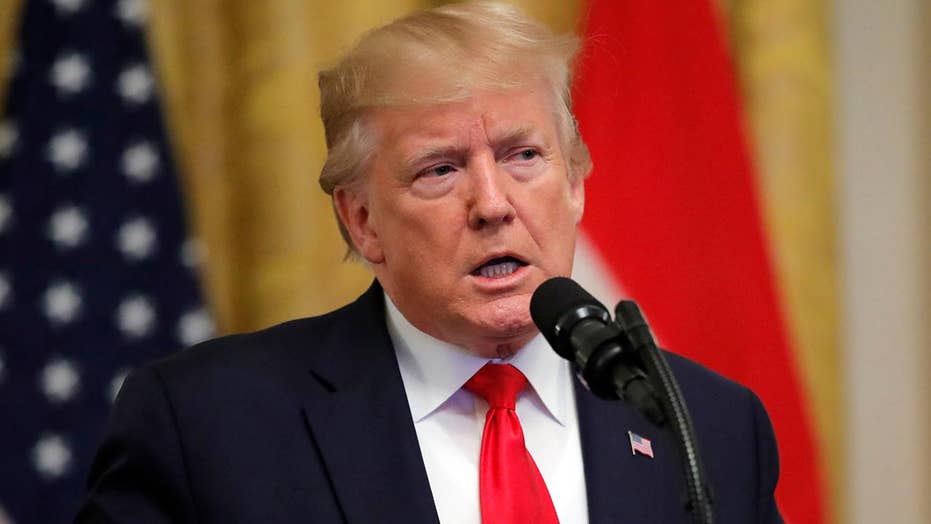 President Trump speaks on military incident with Iran from the White House.

A U.S. warship destroyed an Iranian drone in the Strait of Hormuz amid heightened tensions between the two countries, President Trump announced Thursday.

“The U.S. reserves the right to defend personnel, facilities, interests,” he said.

Trump said the USS Boxer took defensive action after the drone closed to within 1,000 yards of the warship and ignored multiple calls to stand down. The president called it the latest “hostile” action by Iran.

The device, known as the Light Marine Air Defense Integrated System, deployed for the first time in January aboard the USS Kearsarge, the same class of warship as the USS Boxer.

Trump also called on other countries to condemn what he described as Iran’s attempts to disrupt the freedom of navigation and global commerce in the strategic waterway in the Persian Gulf region.

Chief Pentagon Spokesperson Jonathan Hoffman confirmed to Fox News in a statement: "At approximately 10 a.m. local time, the amphibious ship USS Boxer was in international waters conducting a planned inbound transit of the Strait of Hormuz. A fixed wing unmanned aerial system (UAS) approached Boxer and closed within a threatening range. The ship took defensive action against the UAS to ensure the safety of the ship and its crew."

The president said the drone threatened the safety of the American ship and its crew.

Meantime, Iranian Foreign Minister Javad Zarif said Thursday he had "no information about having lost a drone today."

The latest actions came amid heightened tensions between the U.S. and Iran in the wake of the breakdown of the nuclear deal, as the secretive regime announced it exceeded the threshold of low-enriched uranium stockpile as agreed upon in the 2015 accord.

The tanker was seized by Revolutionary Guard forces on July 14 after getting intercepted south of Iran’s Larak Island in the strategic Strait of Hormuz amid allegations that the tanker was smuggling fuel from Iranian smugglers to foreign customers.

Iran recently shot down a U.S. drone that it said was flying over Iran. Trump called off a planned retaliatory airstrike at the last minute.