It was a chillingly familiar sight for Syrian Kurds in the northeastern slice of their conflict-torn country on Wednesday: civilians stuffing themselves into vehicles and running on calloused feet with little more than the clothes on their backs, in flight from the border towns.

“There has been a massive amount of people leaving the city; the roads are congested with civilians trying to get out," said Joan Garcia, a 27-year-old in the northeastern city of Serekaniye. "We’ve seen people in trucks with their possessions, people trying to leave on foot. Old people are walking alone, escaping the city. People in wheelchairs, shepherds, surrounded their flocks, all rushing in the hopes of finding a safer place.”

According to Garcia, “there have been explosions; we have seen several planes flying over the city, and they [the Turks] used artillery to shell the city and planes to bomb the surrounding villages.” 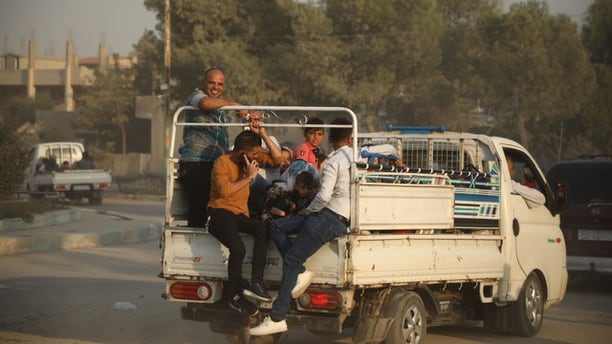 After days of threats, Turkey unleashed military might on Wednesday with the intention of clearing out the U.S-backed Syrian Democratic Forces (SDF) from its border region, in what Turkish President Recep Tayyip Erdogan described as preventing “the creation of a terror corridor across our southern border.”

The sudden policy shift came following a phone call between President Trump and Erdogan on Sunday, prompting the immediate withdrawal of 150 U.S. troops stationed in the area. The move has brought with it bombs and blasts. It has also inspired a revolt in the sprawling al-Hol refugee camp, home to 60,000 Syrians displaced from areas previously controlled by the Islamic State (ISIS).

“There is violence against the guards, tent fires and unrest. The situation in the camp has been growing more critical as the Turkish threats have grown,” sources on the ground told Fox News on Wednesday afternoon. “And with the outbreak of aerial attacks and bombardments today, the situation has reached a boiling point.”

The unrest is depicted as being led by “pro-ISIS women.”

The Rojava Information Center said that the Kurdish Red Crescent was moving teams from other areas to provide support, cautioning that the shifting of personnel would have “a negative impact on care in all the camps.” 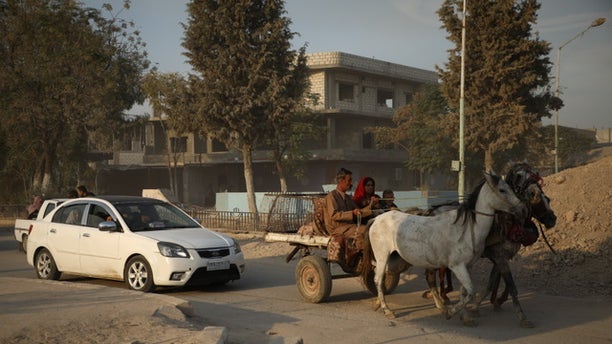 SDF leaders this week expressed profound concern for the thousands of ISIS fighters detained under their authority, highlighting that they don’t have the resources to effectively guard the fighters – many who are foreign – without U.S. support, and if their attention is focused on war with Turkey there's no certainty that revolts won't ensue.

“Turkey put its airplanes into action and started striking around us. They also fired with mortars and tanks on the city, striking a school,” claimed Azad Evdike, a 42-year-old based in Serekaniye. “People are scared and have fled the city. But those of us who remain are not scared; we must fight. We cannot do anything more. We either resist, or we resist.”

For decades, Ankara has been at war with Kurdish separatists in its remote mountains -- that's the Kurdistan Workers Party, better known as the PKK. The group is closely aligned with Kurdish fighters in Syria, many of whom dominate the ranks of the U.S-supported SDF.

The onslaught wedged Washington between two allies – its NATO partner Turkey and the rugged Kurdish-led militia it used as a potent ground against ISIS in the region.

Despite criticism from both sides of the political aisle in D.C., Trump has remained firm in his decision to withdraw the remaining U.S. troops.

“The stupid endless wars for us, are ending!” he tweeted. 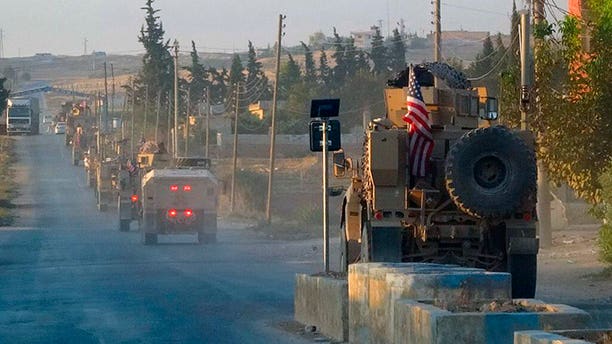 In this image provided by Hawar News Agency, ANHA, U.S. military vehicles travel down a main road in northeast Syria on Monday. (ANHA via AP)

But those surrounded by the mayhem aren't dwelling on politics; their focus is simple survival. At least seven people have been killed in the clashes, and a local military hospital is already tending to the wounded, sources said.

“We have lived through such a situation when ISIS and al-Nusra occupied our city,” said Xemgin, a Serekaniye native. “We defeated both. Some people have left the city because they are afraid, but most of us are ready. We will stay here and defend ourselves as civilians of this land.”