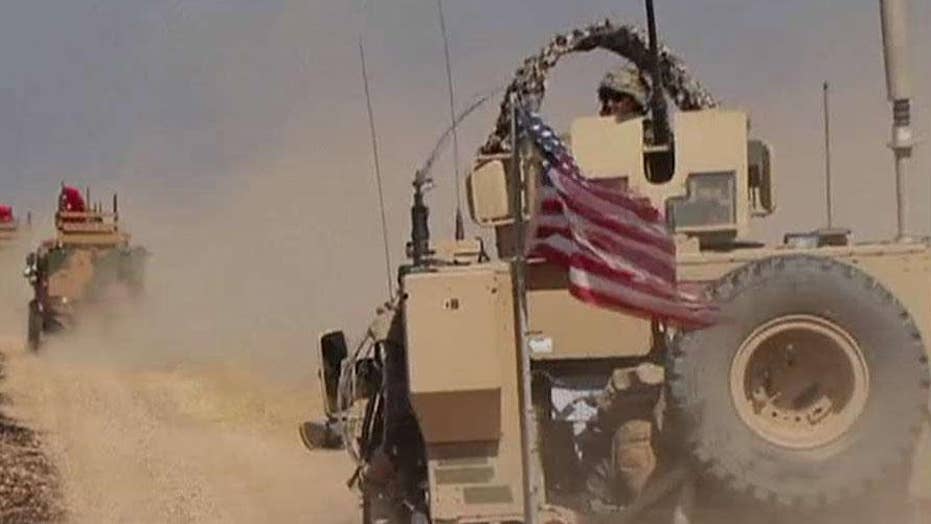 For the past four years, the Kurds helped the U.S. fight ISIS; Trey Yingst reports from Jerusalem.

There’s an old Kurdish expression, “no friend but the mountains.”

And, in the aftermath of President Trump’s surprise announcement Sunday that the U.S. would be withdrawing from the predominantly Kurdish enclave in Northern Syria, those left languishing are sorely voicing the phrase. It's a phrase that has come to define their generations-long struggle, punctured by constant abandonment by foreign leaders.

“I am afraid there will be a process of ethnic cleansing, whether by the Turkish Army or the Free Syrian Army, or a process of demographic change and people from other regions coming in,” a 32-year-old Kobane-based non-governmental organization (NGO) worker named Basheer told Fox News. “But, we expect a military liquidation against the Kurds, we expect (Turkey) to call all of us terrorists to destroy us.”

Saleh Jaaji, 39, lamented that he also was panicking.

“I don’t have a plan, but I am thinking about running away, but I have nowhere to go,” he said. “Everywhere we go, there will be killing, displacing, looting. We made sacrifices for ISIS, and now this.”

The small U.S. contingent in the area of Syria once under the Islamic State's control was considered by many U.S. allies to be an effective use of Special Operations forces – enough to deter the Syrian regime, Russia, Iran, Turkey, and terrorist groups from purporting to dig too deep inside the historically Kurdish terrain, but ultimately at little human cost or sacrifice from the U.S.

A U.S. soldier in an armored vehicle, at a road leading to the tense front line with Turkish-backed fighters, in Manbij town, northern Syria, in 2018. (AP Photo/Hussein Malla, File)

According to one U.S. soldier on the ground, America's role has been primarily to provide equipment and air support, with the Kurdish-led Syrian Democratic Forces (SDF) doing the heavy lifting.

“I am so worried about the U.S. decision. I have already been displaced. I refused to stay in Afrin (after Turkey and the Free Syrian Army) came in last year,” Perry, a 33-year-old displaced person in Kobane, recalled. “We thought Kobane would be safe for us because of the United States protection, but we have been let down. We don’t know where to go that will be safe now.”

Trump’s stunning decision appeared to catch officials and many of his most prominent political loyalists off-guard. Sen. Lindsey Graham, R-S.C., called it a “stain on America’s honor for abandoning the Kurds” and a “disaster in the making.” Former Arkansas Republican Gov. Mike Huckabee called Trump’s decision a “huge mistake” cast against “faithful allies,” and Sen. Marco Rubio, R-Fla., concurred that it was a “grave mistake that will have implications far beyond Syria.”

Nikki Haley, who served as Trump’s ambassador to the UN for almost two years, also condemned the move.

“We must always have the backs of our allies if we expect them to have our back,” she tweeted Monday. “The Kurds were instrumental in our successful fight against ISIS in Syria. Leaving them to die is a big mistake.”

Some officials and analysts also expressed concern that the U.S. stepping out of the Syrian fray would destabilize the blood-strewn region and give strength to an already brewing ISIS resurgence. The terrorist outfit was territorially defeated earlier this year but sustained cells throughout the area that have launched frequent attacks in civilian areas and sprawling refugee camps.

“I expect that there will be chaos in the region, east of the Euphrates in-particular,” noted Bozy, a 39-year-old aid worker in Syria. “We will be ready if there is a civil war between all the components in the region, and the SDF will defend until the end.”

A U.S. official told Fox News on Monday the U.S. military no longer will allow Turkish flights in Syria along the border with coalition aircraft and no longer will share intelligence from drone feeds in the region with President Recep Tayyip Erdogan's forces.

Following a phone call with Erdogan on Sunday, the White House suddenly released a statement announcing that “Turkey will soon be moving forward with its long-planned operation into Northern Syria” and that the U.S. would not be involved, and that the U.S. “will no longer be in the immediate area.”

A member of the Kurdish internal security forces on a patrol in Manbij, north Syria, in March 2018. (AP Photo/Hussein Malla, File)

On Monday, some 100 to 150 troops were said to have started withdrawing from crucial posts in the northeastern dominion.

For decades, Ankara has been at war in the remote mountains with Kurdish separatists who have fought under the banner of the Kurdistan Workers Party, better known as the PKK. The group has been affiliated closely with the Kurdish fighters in Syria, many of whom dominated the ranks of the U.S.-supported SDF.

In an interview with Fox News late last month, Nasr Al-Hariri, the president of the Syrian Negotiation Commission (SNC) – which is closely allied to Turkey – also expressed concern over the SDF and its motivation.

“Turkey has legitimate concerns, as we have. Although the SDF fought ISIS, they are holding a separatist agenda,” he said. “They want to divide the country, and the majority of the Syrian people are against this agenda. It is up to all Syrians to decide the political future of the country.”

While the alliance between the United States and Kurdish Syrians has long riled Ankara, the SDF took the lead on the ground against ISIS – effectively stamping out the terrorist scourge at the cost of thousands of their own lives.

“I am afraid of this decision to withdraw U.S. troops as they are the only force that can protect us,” underscored Ali Nabo Ahmad, a 39-year-old medical manager in the Rojava region. “We are living here in peace – millions of Kurds, Arabs, Christians – and the U.S. withdrawal will allow Turkey to genocide us from the north, and the Assad regime will attack from the south, and it will give ISIS a chance to recover.”

Others in the region expressed dismay that the U.S. had “cheated” them; still others blamed the SDF for trusting the United States in the first place and now leading innocent civilians to be caught in the crossfire. Some decried that as much as they “hate” the Damascus regime, aligning with Assad might now be their best bet for survival.

U.S. military vehicles traveling down a main road in northeastern Syria on Monday. (ANHA via AP)

It remains unclear how Turkey’s long-threatened operation will unfold. In the wake of condemnation against his pullout announcement, Trump, on Monday, warned that he would “obliterate and destroy” the Turkish economy should Erdogan's forces aim at the Kurds.

But, for Mazlom Daban, a former teacher and 33-year-old father of three, it remained a wincing blow to their faith in the red, white, and blue.

“Maybe there are no benefits economically for Mr. Trump to keep U.S. troops in the area,” he added. “But, those hundred or so forces were protecting more than five million souls here.”