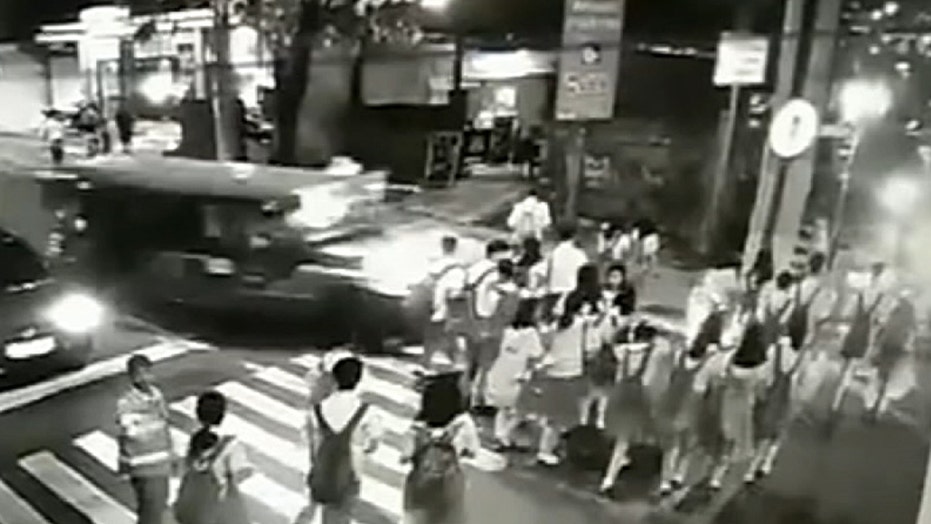 Raw video: Makati police release shocking footage of a driver plowing through a group of students crossing the street in Manila, Philippines. A 14-year-old student died and 7 of his classmates were also injured.

A 14-year-old student in the Philippines was killed and seven of his classmates injured when a speeding jeepney plowed through a city crosswalk Wednesday night, authorities said.

Makati Police released street video showing the high school students crossing a street in Makati City, located in the Manila region, when they were struck by a wayward jeepney, a flamboyant passenger truck and a popular mode of travel in the Philippines.

The victims were ages 13 to 17 years old, investigators told local media. They were rushed to Ospital ng Makati and Makati Medical Center for treatment.

Investigators said the driver, identified as 31-year-old Crisalde Tamparong, claimed the brakes stopped working, but CCTV video shows that he stopped the vehicle after hitting the students, the Manila Bulletin reported.

Tamparong does not have a driver’s license and a preliminary drug test came back positive, Makati Police Chief Col. Rogelio Simon told the Philippines Daily Inquirer.

Police did not immediately say what charges would be filed against the driver.