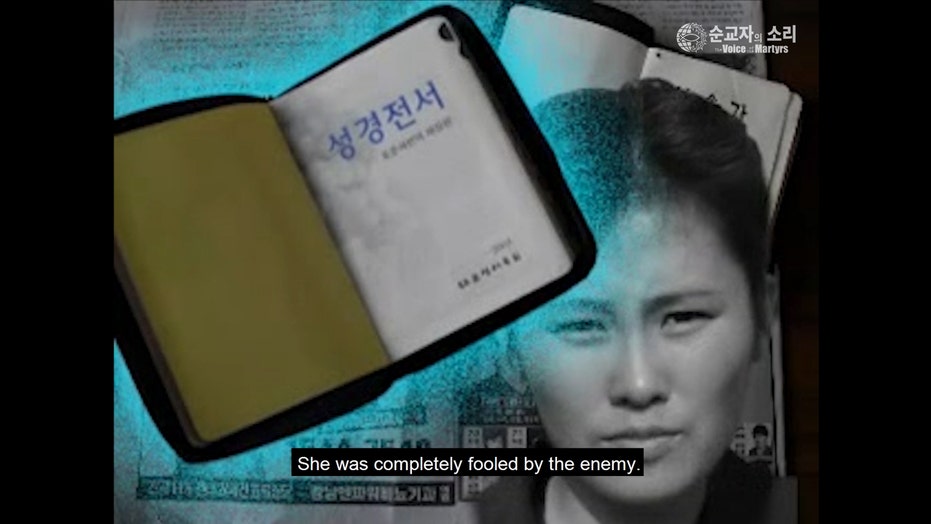 Newly discovered North Korea propaganda footage sheds light on how the Communist regime trains state security agents on how to identify and silence Christians in the Hermit Kingdom.

The video obtained by The Voice of the Martyrs (VOM), a Christian nonprofit that supports persecuted believers all over the world, was shared with Fox News and translated by VOM-Korea staff. The previously unseen film shows the story of Cha Deoksun, whose life otherwise might not have been known to the world, and her belief in a deity other than Kim Jong Un.

“This video illustrates very clearly why it is so important for Christians everywhere to pray for North Korea and for Christians there," Todd Nettleton, host of VOM Radio and an author of the history of Christianity in North Korea, said.

According to the video, Cha is described as a "spy," a description of evangelists commonly used in North Korean propaganda.

Cha lost her faith in government during the Great Famine in the 1990s when she illegally crossed the border into China and found God at Seotap Church and then became a fanatical believer who was inspired to return to North Korea and form an underground church.

NORTH KOREA PRISON CAMP SURVIVOR: 'AM I A CHRISTIAN? YES. I LOVE JESUS. BUT I DENY IT'

“One of the things that is difficult to understand for many Americans is that being a Christian in North Korea is not just following a different religion, or even following Western teaching,” Nettleton added. “The Kim regime is built on the idea that the Kims are divine beings. So being a Christian is treason. The regime understands clearly that North Koreans hearing about salvation through Jesus Christ is a direct threat to their power,” said Nettleton.

Christian materials shown in an North Korea government anti-religion training video. (The Voice of the Martyrs)

The underground believer turned herself in for breaking the law crossing into China, but authorities were "lenient" and let her go. Because she was impoverished, Cha was able to travel from city to city to earn more money, but officials say she gave money to poor people and gathered with fellow underground Christians every Sunday to worship, pray, sing hymns, and study the scripture.

Eventually, she was reported by "a good and awakened North Korean citizen," though it is unclear how she died. VOM believes Cha was either executed by firing squad or died in a concentration camp.

Cha Deoksun, a previously unkown North Korean martyr, before the Communist country made a propaganda training video about her case. (The Voice of the Martyrs)

"The video is a prime example of how paranoid the North Korean regime is about Christianity in particular," Dan Chung, the co-founder and executive director of Crossing Borders, a Christian nonprofit dedicated to helping North Korean refugees who cross into Chian for food and medical assistance, told Fox News. "The regime knows that there is an underground church in the country that they cannot seem to get rid of, in spite of their many efforts."

Cha's story is similar to Pastor Han Chung-Ryeol, a Chinese pastor of Korean descent who had a church on the China-North Korea border. He was executed in 2016 after leading more than 1,000 North Koreans to Christ.

"VOM’s video for this year’s International Day of Prayer for the Persecuted Church (IDOP) focuses on North Korea, and on the story of another martyr who was killed for reaching out to North Koreans with the gospel—Pastor Han,” Nettleton said.