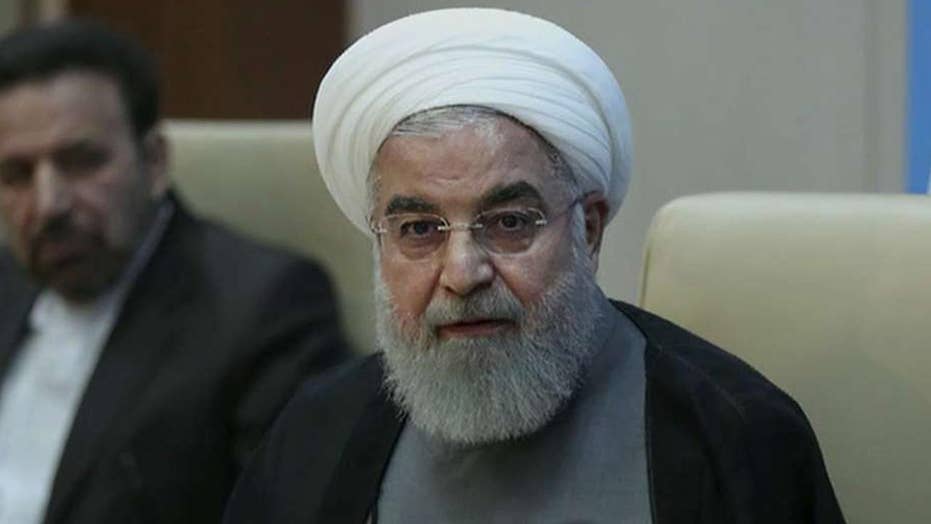 Iran’s president warned Britain that it will face “repercussions” over the “mean and wrong” seizure of one its supertankers last week that authorities believe was operating in violation of European Union sanctions.

The comments from Hassan Rouhani come after British Royal Marines joined authorities in Gibraltar in capturing the tanker amid suspicions that it was trying to provide crude oil to Bashar Assad’s Syrian regime – an ally of the Islamic Republic.

“You are an initiator of insecurity and you will understand its repercussions," Rouhani was quoted by the official IRNA news agency as saying Wednesday during a Cabinet meeting, adding that the seizure of the ship was “mean and wrong.”

A day earlier, Major General Mohammad Bagheri, Iran’s armed forces chief of staff, told the Tasim news agency that Tehran will give an “appropriate answer” to Britain following their actions.

Foreign Minister Mohammad Javad Zarif, meanwhile, denied the supertanker belonged to Iran, saying whoever owned the oil shipment and the vessel could pursue the case through legal avenues. Iran had earlier summoned the British ambassador over what it called the "illegal interception" of the ship.

The tanker's detention comes at a particularly sensitive time as tensions between the U.S. and Iran are rising over the unraveling of the 2015 nuclear deal, from which President Trump withdrew last year. The U.S., following the withdrawal, then restored heavy sanctions on Iran.

In recent weeks, Iran has begun to openly breach limits on uranium enrichment set by the deal in order to pressure European signatories to salvage it. But the other parties to the deal — Russia, China, Germany, France, Britain, and the European Union — have called for Iran to stick to its commitments.

Ali Shamkhani, a senior Iranian security official, told a French envoy Wednesday that the decision to increase enrichment is an "unchangeable strategy" and criticized European countries for their "lack of will" in providing relief from the U.S. sanctions, according to the official IRNA news agency.

The U.S. on Wednesday though urged the signatories not to give in to Iran's demands by providing new economic incentives to get it to pull back from the recent escalation of its atomic program.

Jackie Wolcott, the U.S. ambassador to international organizations in Vienna, told a gathering of the International Atomic Energy Agency that Iran's recent moves to enrich uranium beyond the deal's limits amounted to "nuclear extortion."

She said Iran's "misbehavior" should "not be rewarded."

Fox News' Edmund DeMarche and Lukas Mikelionis and the Associated Press contributed to this report.