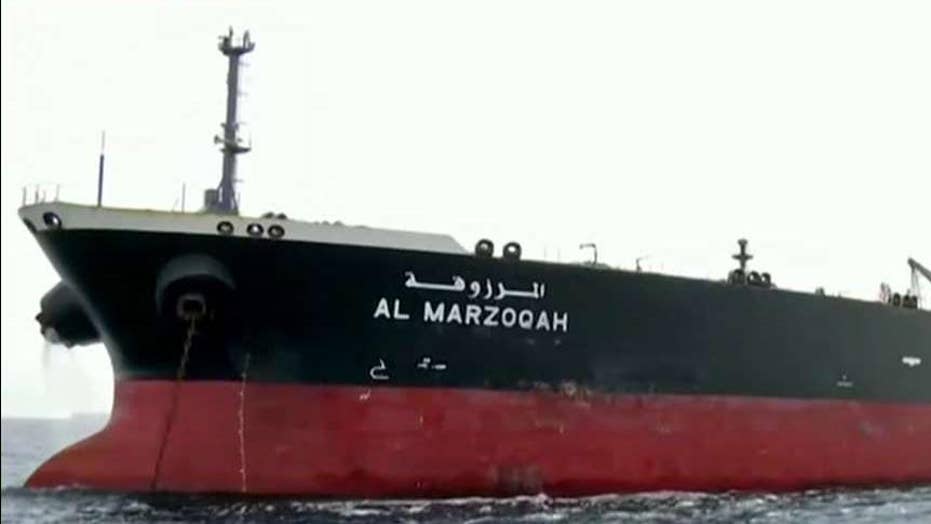 Iran claims they have helped an unnamed vessel that suffered a technical malfunction in the Strait of Hormuz amid U.S. concerns that Tehran seized an oil tanker from the United Arab Emirates; Trey Yingst reports.

Iran’s Foreign Ministry has said the Islamic Republic helped an unnamed vessel that suffered a technical malfunction in the Strait of Hormuz amid U.S. concerns that Tehran seized an oil tanker from the United Arab Emirates in the area.

Abbas Mousavi, the Foreign Ministry spokesman, was quoted as saying in the state-run IRNA news agency early Wednesday that Iranian forces rushed to the aid on an unidentified tanker that had reportedly sent a distress call after a “technical glitch.”

He said tugboats towed it toward Iranian waters for repairs. Mousavi did not say what nation the ship was from, who owned it or its current status.

Iran’s statements come as both the U.S. and the U.A.E. said the vessel has not been in contact with its owner since its transponder turned off late Saturday night.

The MT Riah, a Panamanian-flagged oil tanker based in the U.A.E., was traveling through the Strait of Hormuz on Saturday night when its tracking system went dark. The 190-foot tanker stopped transmitting its location around 11 p.m. as tracking data showed its last position toward Iran.

“That is a red flag,” said Capt. Ranjith Raja of the data firm Refinitiv on Tuesday. He said the tanker had not switched off its tracker in three months of trips around the UAE.

The Strait of Hormuz connects the Persian Gulf with the Gulf of Oman and about 20 percent of the world’s oil passes through the narrow waterway.

An Emirati official contradicted Mousavi’s comments, telling the Associated Press on Tuesday that the MT Riah offered no distress call before switching off its tracker, adding that they “are monitoring the situation with our international partners.”

A U.S. defense official told The Associated Press that America "has suspicions" Iran seized the vessel amid tensions between Tehran and Washington over its unraveling nuclear deal with world powers.

“Could it have broken down or been toward for assistance? That’s a possibility,” an unidentified U.S. official told The Associated Press. “But the longer there is a period of no contact. It’s going to be a concern.”

Oil tankers previously have been targeted in the wider region amid tensions between the U.S. and Iran over its unraveling nuclear deal with world powers.

The concern over the Riah’s status comes as Iran continues its own high-pressure campaign over its nuclear program after President Donald Trump unilaterally withdrew America from the accord over a year ago.

The ship's registered owner, Dubai-based Prime Tankers LLC, told the AP it had sold the ship to another company called Mouj Al-Bahar. A man who answered a telephone number registered to the firm told the AP it didn't own any ships. The Emirati official said the ship was "neither UAE owned nor operated" and carried no Emirati personnel, without elaborating.

Separately Tuesday, Iran's Supreme Leader Ayatollah Ali Khamenei said his country will retaliate over the seizure of an Iranian supertanker carrying 2.1 million barrels of light crude oil. The vessel was seized with the help of British Royal Marines earlier this month off Gibraltar over suspicion it was heading to Syria in violation of European Union sanctions, an operation Khamenei called "piracy" in a televised speech.

"God willing, the Islamic Republic and its committed forces will not leave this evil without a response," he said. He did not elaborate.

British Foreign Secretary Jeremy Hunt said Saturday that Britain will facilitate the release of the ship if Iran can guarantee the vessel will not breach European sanctions on oil shipments to Syria.

Iran previously has threatened to stop oil tankers passing through the strait, the narrow mouth of the Persian Gulf through which 20% of all crude oil passes, if it cannot sell its own oil abroad.

Fox News' Louis Casiano and the Associated Press contributed to this report.