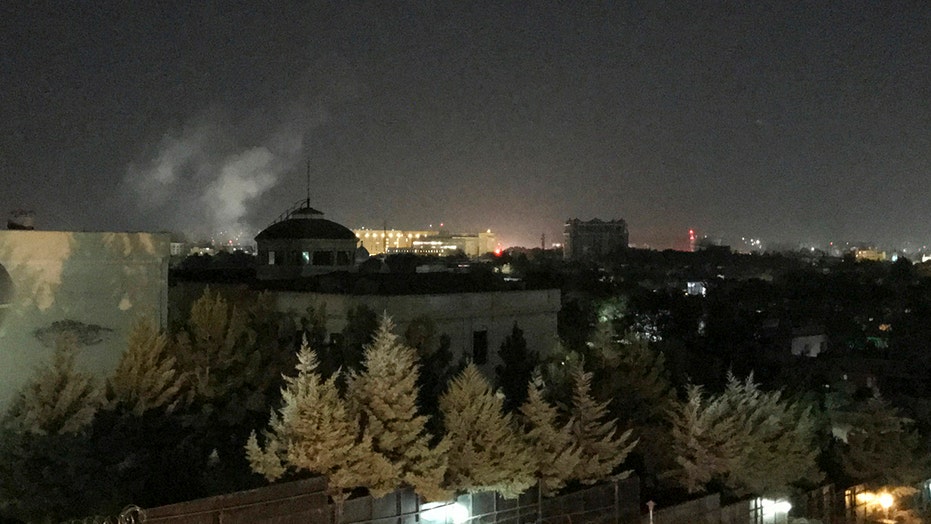 A rocket exploded near the U.S. embassy in Kabul, Afghanistan, early Wednesday, the 18th anniversary of the 9/11 attacks.

A plume of smoke rose over central Kabul shortly after midnight and sirens could be heard. Inside the embassy, employees heard this message over the loudspeaker: "An explosion caused by a rocket has occurred on compound."

Officials gave the all-clear about an hour after the blast and reported no injuries. The NATO mission, which is nearby, also said no personnel had been injured.

The attack was the first major action in Kabul since President Trump announced Monday that peace talks with the Taliban to end America's longest war are "dead." Over the weekend,  Trump abruptly canceled planned meetings with Afghan and Taliban leaders at Camp David. The Taliban had claimed responsibility for two car bombings last week, one of which killed an American soldier.

A plume of smoke rises near the U.S. Embassy in Kabul, Afghanistan on Wednesday, Sept. 11, 2019. A blast was heard shortly after midnight on the anniversary of the 9/11 attacks. (AP Photo/Cara Anna)

Taliban spokesman Zabihullah Mujahid told Al Jazeera that Trump would regret turning his back on peace talks. "We had two ways to end the occupation in Afghanistan. One was jihad and fighting, the other was talks and negotiations," said Mujahid. "If Trump wants to stop talks, we will take the first way and they will soon regret it."

The 9/11 anniversary is a sensitive day in Afghanistan's capital and one on which attacks have occurred. A U.S.-led invasion of Afghanistan shortly after the 2001 attack toppled the Taliban, who had harbored Usama bin Laden, the Al Qaeda leader and attacks' mastermind.

In the nearly 18 years of fighting since then, the number of U.S. troops in Afghanistan soared to 100,000 and dropped dramatically after bin Laden was killed in neighboring Pakistan in 2011.

The now-defunct accords were said to include the withdrawal of 14,000 U.S. troops through the end of 2020. In exchange, the Taliban would have had to agree not to allow Afghanistan to be a safe haven for terrorist groups which threaten the security of the U.S.

The Taliban had said they issued the attacks to gain leverage in their negotiations with the U.S., demanding that all of the approximately 20,000 U.S. and NATO troops leave Afghanistan as soon as possible.

The Afghani government had been critical of any sort of peace agreement, largely because the Taliban had demanded Afghanistan President Ashraf Ghani be shut out of the negotiations. "Peace with a group that is still killing innocent people is meaningless,” said Ghani last week. "Afghans have been bitten by this snake before," added his advisor Waheed Omer.