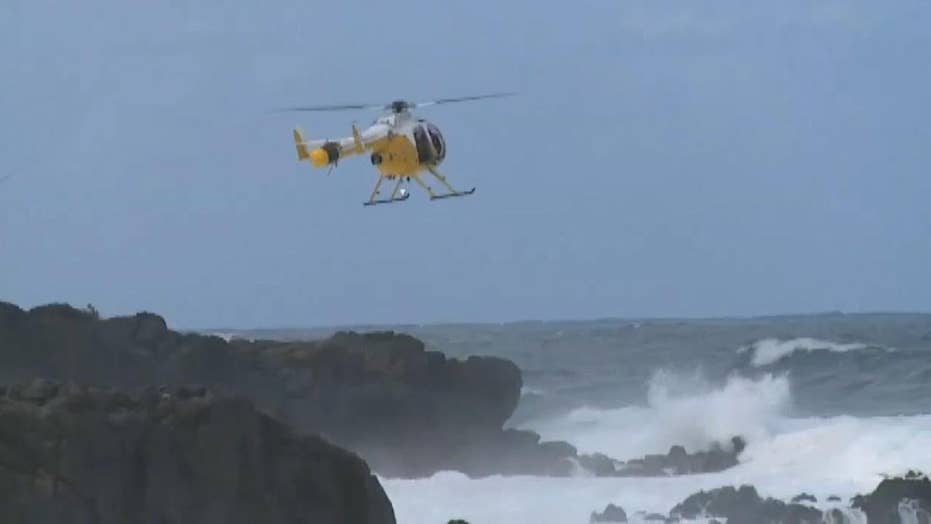 Search for missing swimmer swept out to sea in Hawaii

Coast Guard says a 20-year-old Swedish visitor was swept out to sea at Waimea Bay.

Authorities in Hawaii suspended the search late Sunday for a 20-year-old woman from Sweden who was swept into the ocean by a wave over the weekend.

The U.S. Coast Guard 14th District said in a news release the active search for Hanna Wänerskog was suspended at 11 p.m., and that the Honolulu Fire Department is taking the lead in an attempt to locate and recover the 20-year-old.

"This incident is tragic and unfortunate," Lt. Cmdr. Brock Blaisdell of Coast Guard Sector Honolulu said in a statement. "The decision to suspend an active search is always a difficult one."

OREGON FLOODING LEADS TO DOZENS OF RESCUES, BODY OF WOMAN 'SWEPT AWAY BY RUSHING WATER' DISCOVERED

Wänerskog was last seen at Waimea Bay on the north shore of the island of O'ahu around 6:30 p.m. treading water. Fire officials told KHON2 they received a swimmer in distress call shortly before 7 p.m., and the Coast Guard was called in to assist by 7:30 p.m.

A surveillance camera captured the moment that Wänerskog was standing on the beach with two other people when all three were overcome by a wave and swept out.

“She was at the beach here, close to the rocks, in about ankle-deep water when a swell came in and knocked her and her friends over, unfortunately, she was swept out,” Sr. Chief Petty Officer Jason Bryant of the U.S. Coast Guard told KHON2. “She was last seen attempting to swim back in but then a wave overcame her and that was the time she was last seen."

At the time she was swept out to sea, Wänerskog was fully clothed, wearing black shorts and a black shirt.

Since Friday, Coast Guard helicopters, fixed-wing aircraft, and cutters along with helicopters from the U.S Navy conducted 40 searches encompassing over 485 square miles in an attempt to locate Wänerskog.

The Honolulu Fire Department, Honolulu Police Department, and Ocean Safety also utilized helicopters, jets skis and ground teams in the three-day search for Wänerskog before efforts were suspended late Sunday. Searchers had difficulty over the weekend with high surf and strong winds out of the north.

"It is a decision based on survivability factors and time always works against us," Blaisdell said in a statement. "Our deepest condolences go out to the Wänerskog family and Hanna's friends. "

Wänerskog was reportedly at the beach area with friends she met during the first weeks of a three-month internship with a nonprofit called Surfing the Nations. Logan Jacobs, a leadership team member with the organization, told the Honolulu Star-Advertiser she came to Hawaii to serve "the youth at risk and homeless."