Two men carrying AK-47s thought they were going to steal a red Corvette in the parking lot of a Florida paint store on Tuesday – until the retired police officer driving it flashed his badge and they ran away.

When the sports car pulled into Ben's Paint Supply in Lakeland, the masked men ran up to it brandishing the rifles and yelling.

"We literally saw everything step by step and it was terrifying," store employee Sally Crisp told FOX 13 News. "They even took the rifle and was hitting the glass and everything, trying to get the gentleman to get out of his car." 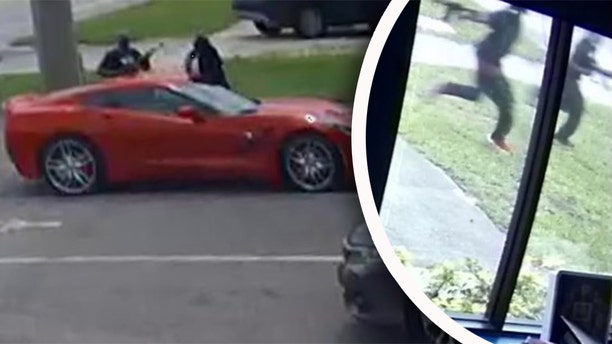 That's when the carjackers got a surprise they were not expecting.

"He had his wallet in his lap because he was getting ready to come in and pay and he opened it up and he flashed his badge and they took off," Crisp said.

The incident was caught on security cameras inside and outside the store.

FLORIDA PASTOR STOPS BURGLAR AT CHURCH, HOLDS HIM AT GUNPOINT UNTIL COPS ARRIVE

The Lakeland Police Department says nobody was injured and they are still searching for the suspects, who were traveling in a "black or dark charcoal gray GMC Acadia." Investigators found the vehicle, but the suspects are still on the lamb, FOX 13 News reported.

"It hit me and my coworker and we both kind of just started to cry," Crisp said. "This could have been the worst day ever but we were very lucky that it turned out the way that it did. So I just hope that they catch him."

Police are asking anyone with information on the would-be-thieves to come forward.