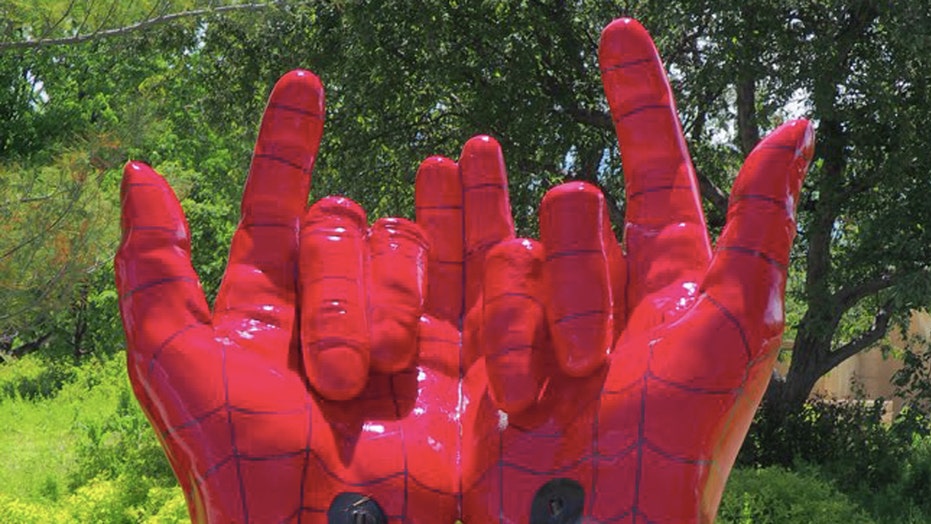 A Nebraska woman is asking that a sculpture depicting the hands of Spider-Man be taken down over claims that the statue is “demonic” and “anti-Christian,’ despite the fact that it was built as part of faith-based community organization project.

Paige Schuppan sent an email on July 2 to the mayor’s office calling for a statue placed outside the Lincoln Children’s Zoo to be relocated, stating that the imagery of two open hands resembled the “Devil Horns.”

“This is anti-Christan, and demonic, and completely inappropriate and offensive to place in front of the Children’s Zoo and the Gardens where couples are married,” her email read.

She went on to say that the sculpture was offensive to “many people” in the area and called it a hate crime against the church, even likening it the hate and violence incited by the Ku Klux Klan.

The statue was first displayed without the noteworthy spider webs on May 15 by artist Ian Lang. Two weeks later the webs were added.  (Youth for Christ Lincoln and Campus Life)

Lin Quenzer, City of Lincoln's Ombudsman, informed Schuppan that the statue was in fact part of an art project sponsored by Campus Life and Youth for Christ Lincoln, a nonprofit faith-based community organization in Lincoln.

‘AVENGERS: ENDGAME’ ACTRESS GOT IN TROUBLE WITH MARVEL STUDIOS HEAD OF SECURITY FOR POSTING A SUNSET PICTURE

“The goal was to have 50 sculptures displayed in Lincoln from May 1 - August, 2019 with an art auction of the pieces to benefit Campus Life to follow.”

Ombudsman went on to say that the city would not ask Campus Life to remove the statue as it was placed on private property “by the permission of the property owners.”

“The City of Lincoln did not select the pieces for these installations nor determine their locations within the community. Campus Life chose ‘Hands’ as a representation of their mission as they serve the community and reach out to teens in difficult circumstances.”

Fox News spoke to Youth for Christ Lincoln and Campus Life Executive Director Matt Schulte Friday who said that the sculpture had “no intention of celebrating satan” and clearly had “child-like intent.”

“We have been investing in the lives of students in Lincoln for 50 years and part of our mission is to give kids the chance to hear about God and make an informed decision about Him,” Schulte said in an email. “We see this as a playful, fun celebration of an American hero.”

Schulte also said in an email to Shuppan that “the sculpture is most definitely not a devil related sculpture.”

He told Fox News that the statue was first displayed without the noteworthy spider webs on May 15 by artist Ian Lang. He said two weeks later the webs were added and the statue’s resemblance to Spider-Man seemed undeniable.

Shuppan argued in a separate email that while she does not follow the superhero series, she is familiar with the character and does not see the traditional red and blue color scheme which is featured in the original comic.

A later rendition of Spider-Man does show the character in red and black.