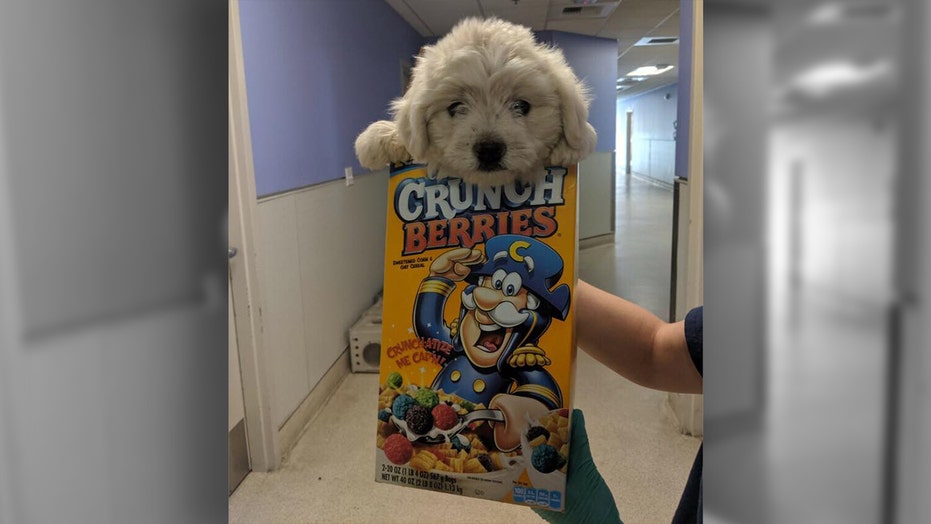 A puppy that was discovered abandoned in a park in Southern California and brought to an animal shelter in a cereal box finally has a home -- and one that isn't part of a balanced breakfast.

Riverside County Animal Services tweeted the 9-week old puppy, named Razz Berry, was adopted Saturday by a family in Riverside that picked the highest number in a lottery for the dog.

The dog was discovered abandoned at Bryant Park in Riverside last Tuesday and brought to the shelter.

"We have seen some creative pet carriers in our days," the shelter said on Twitter. "This @RealCapnCrunch cereal box has to be one of the oddest ways a pet came to us as an over-the-counter dropoff."

A 9-week-old puppy was discovered abandoned in a park and brought to an animal shelter in a cereal box. (Riverside County Animal Services)

The dog was infested with fleas and needed a medicated bath, FOX11 reported.

THIS COMMON SUGAR SUBSTITUTE CAN BE DEADLY FOR DOGS, FDA WARNS

It wasn't known why the Good Samaritan placed the dog in a cereal box before taking the puppy to the shelter.

After posting a photo of the barker in the box to Twitter, the shelter said demand for the puppy skyrocketed.

On Saturday, 20 families came to the shelter in hopes of adopting the dog. The Sheets family of Riverside ended up picking the winning number in the lottery to take the pup home.