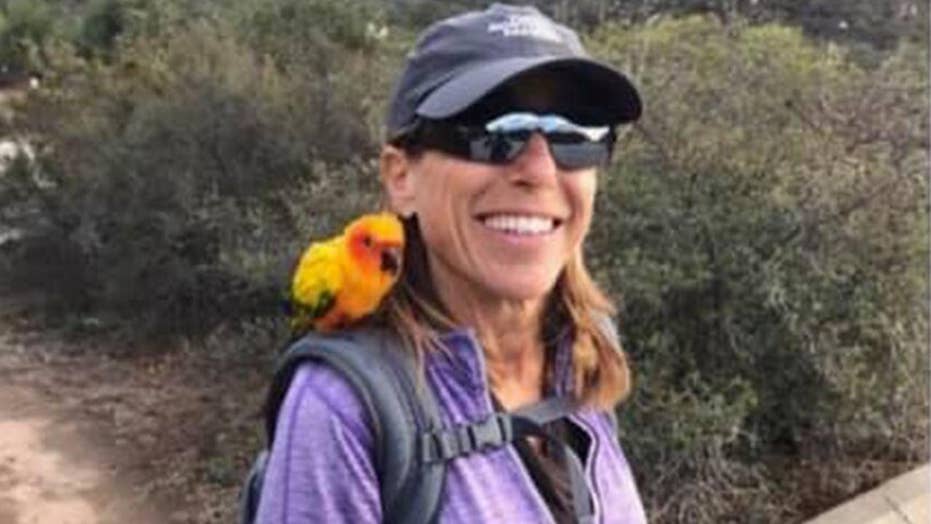 60-year-old Sheryl Powell says she fled into the wilderness after a man wielding a knife threated her and her dog in remote terrain in the Sierra Nevada mountains; Robert Gray reports from Los Angeles.

Sheryl Powell, a California mother and hiker who vanished four days ago during a camping trip, was found alive Monday, her daughter and investigators announced.

Farrah Powell wrote on her Facebook page on Monday, "SHES ALIVE!!! This is the happiest day of our lives. We can’t thank everyone enough!!!!!!!"

She included a picture of her mother surrounded by her family in the hospital in the post.

Sheryl Powell, 60, had been missing since Friday afternoon. Her husband, Joseph, told the Inyo County Sheriff's office she was last near the Grandview Campground, in the Ancient Bristlecone Pine Forest area of the White Mountains. He said she and their dog "vanished" from the California campground when she went to take the dog out for a bathroom break while he parked their vehicle.

"After searching for almost an hour, Mr. Powell alerted law enforcement through his satellite device," according to The Inyo County Sheriff’s Office, who referred to Powell as an "experienced hiker."

The sheriff's office posted an update on its Facebook page Monday afternoon writing, "Missing hiker, Sheryl Powell was located alive by ground search team members near the Montenegro Springs area (below where her dog was located earlier today)."

Her small dog named Miley was found alive on Monday in an area about two-and-a-half miles from Powell’s last known location, according to an earlier Facebook post.

Powell claimed that she was chased down a hill by a man with a knife while her husband was looking for a place to park, according to her son Greg.

In a post with disturbing accusations on Greg Powell's Facebook page Monday, he wrote that his mother was threatened by the man wielding the knife who allegedly told her, "you’re going to do what I want or I’m going to take my knife to your dog.” Greg said she then ran away from the man she thought was trying to rape her.

"When she figured she had lost him she also realized she was quite lost," Greg wrote in the post. "Thankfully she is strong and resilient and knew how to find water (despite no map, phone, or overt knowledge of the area)."

He said his mother traveled at night to avoid dehydration. She told her family she managed to find water and a cactus to eat, but couldn't walk any further after a certain point.

Greg wrote that his mother “still got dehydrated and when she could no longer walk she scooted as far as she could.”

He added, "She tried to leave Miley leashed near the stagnant water but she refused to be left alone and broke out of her leash and stayed near my mom."

Greg said his mother saw the helicopters and tried to wave them down but crews couldn’t see her. "She told us she has started to give up hope today," Greg wrote.

He said Miley’s barking ultimately led search and rescue teams to his mother, who was found about 200 yards away.

"My mom is an amazing human being and she looks pretty good given the situation," Greg wrote on Monday. "Her first words [sic] to us were 'I'm so sorry I put you through that, you guys must have been so worried,' just proving how selfless she is."

He added, "We are overjoyed to be reunited with her!"

The allegation that Powell was chased by a man wielding a knife was not confirmed by the Inyo County Sheriff’s Office, but in a Facebook post earlier on Monday the office wrote, "The investigations portion of the Powell search continues."

Searchers described Powell "as resilient and strong but exhausted after being lost in an extremely remote area above Big Pine, CA," The Inyo County Sheriff’s Office posted on their Facebook page after she was found.

Powell, of Huntington Beach, Calif., was transported to an area hospital for “medical clearance,” according to the post.

"We are beyond grateful for the continued support from her family, local residents, visitors, and the media," the latest post from the sheriff’s office said. "We also cannot thank our assisting agencies enough for their amazingly hard work in difficult terrain throughout this 4-day search."

Earlier on Monday, Farrah said on "Shepard Smith Reporting" that she and her brother had been searching six miles a day on foot for their mother in a rescue operation that included dogs and a helicopter.

"We've been tracking everything using different apps," she told Shepard Smith. "We've given all of our tracks to search and rescue -- covering areas that they haven't covered. We are doing everything we can out there."

Search and rescue teams began looking for Powell and her dog immediately after authorities were notified she had disappeared on July 12. The search included trained ground and dog teams from all over the state, as well as aerial reconnaissance provided by a naval air station and the California National Guard, according to the sheriff’s office.

On his Facebook page, Greg thanked all those who helped with the rescue efforts. He said the Powell family will be refunding all the donated money as soon as they can.