2019 Atlantic Hurricane season comes to an end: Here's how it stacked up

Another above-normal hurricane season is officially in the books, after another busy period of tropical activity during the peak of the season.

The U.S. National Hurricane Center issued the final tropical weather summary on Monday at the tail end of the 2019 Atlantic hurricane season, which runs from June 1 to Nov. 30.

Forecasters said this season produced 18 named storms, including six hurricanes of which three became "major" hurricanes of Category 3 or higher on the Saffir-Simpson Hurricane Wind Scale. The National Oceanic and Atmospheric Administration's outlook had called for 10 to 17 named storms, five to nine hurricanes and between two and four major hurricanes.

Gerry Bell, the lead hurricane forecaster at NOAA's Climate Prediction Center, said this season's activity ramped up in mid-August in what is the normal peak of the season.

“The above-normal activity is consistent with the ongoing high-activity era, driven largely by the Atlantic Multidecadal Oscillation, which entered a warm phase in 1995," Bell said. "Conditions that favored more, stronger, and longer-lasting storms this year included a stronger West African monsoon, warmer Atlantic waters, and weak vertical wind shear across the western Atlantic and Gulf of Mexico.” 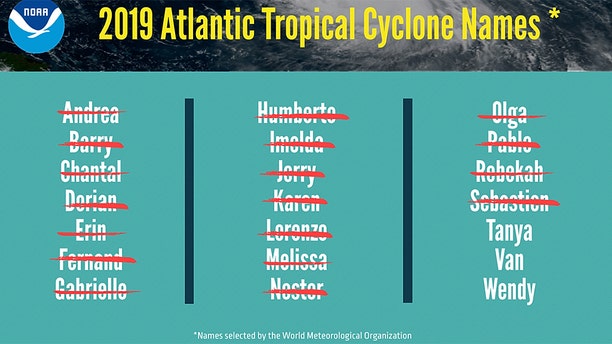 The list of names for the 2019 Atlantic Hurricane Season.

In 2019, the three major hurricanes were Dorian, Humberto, and Lorenzo.

Dorian and Lorenzo both have the distinction of strengthening into Category 5 hurricanes. 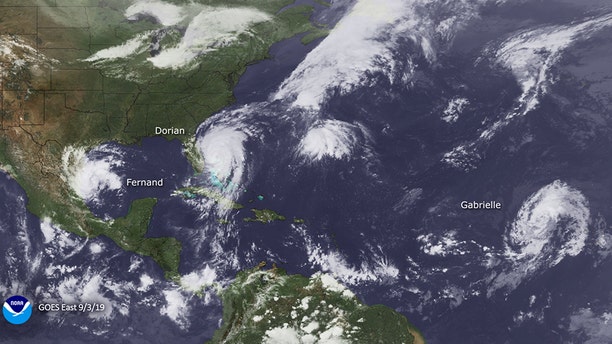 Hurricane Dorian can be seen churning off the southeast coast of the U.S. on Sept. 3, 2019, in this satellite photo. (NOAA/GOES East)

Forecasters said in all, four storms made landfall in the U.S. during the 2019 season: Barry, Dorian, Imelda, and Nestor. Dorian was the most destructive of the storms, causing over 60 deaths and property damages estimated to be over $3.4 billion in the Bahamas, according to Inter-American Development Bank.

Dorian's close pass with Florida's east coast and subsequent landfall in North Carolina that brought rain, wind, and storm surge flooding up New England and Nova Scotia in Canada caused estimated damages from $500 million to $1.6 billion, according to the Insurance Information Institute.

Hurricane Barry, which made landfall in Louisiana in July, was estimated to have caused around $600 million in damages.

HOW HURRICANE NAMES ARE 'RETIRED' FROM USE FOR FUTURE STORMS

Five tropical cyclones also formed in the Gulf of Mexico, which tied a record from 2003 and 1957 for the most storms to form in that region. Of those storms that formed, three, -- Barry, Imelda, and Nestor -- made landfall in the U.S.

Over the course of the 2019 Atlantic hurricane season, the NOAA's so-called "hurricane hunter" aircraft and crews flew 57 missions over 430 hours, which along with the  53rd Weather Reconnaissance Squadron of the Air Force Reserve helped provide data to forecasters.

“NOAA provided around-the-clock support to communities before, during and after each tropical weather threat,” Acting NOAA administrator Neil Jacobs said in a statement. “The expertise of our forecasters, coupled with upgrades like those to the Global Forecast System model and our next-generation environmental satellites, helped NOAA and its partners save lives and protect property all season long.”

In addition to flights into the storms, the NOAA’s King Aircrew collected more than 26,939 aerial images covering more than 4,300 square miles of areas affected by Hurricane Dorian, while researchers deployed 30 autonomous ocean glider missions in the Atlantic to help provide observations of ocean temperature and salinity to help optimize hurricane forecast models. 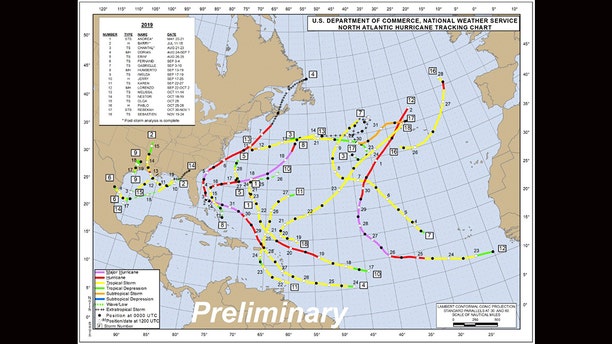 The tracks of all the tropical storms and hurricanes of the 2019 Atlantic Hurricane Season. (National Hurricane Center)

Before the season begins, the NOAA’s Climate Prediction Center will provide its initial seasonal outlook in May.

"Now is the time for families and communities to become Weather-Ready and prepare for the season ahead," the NOAA said.