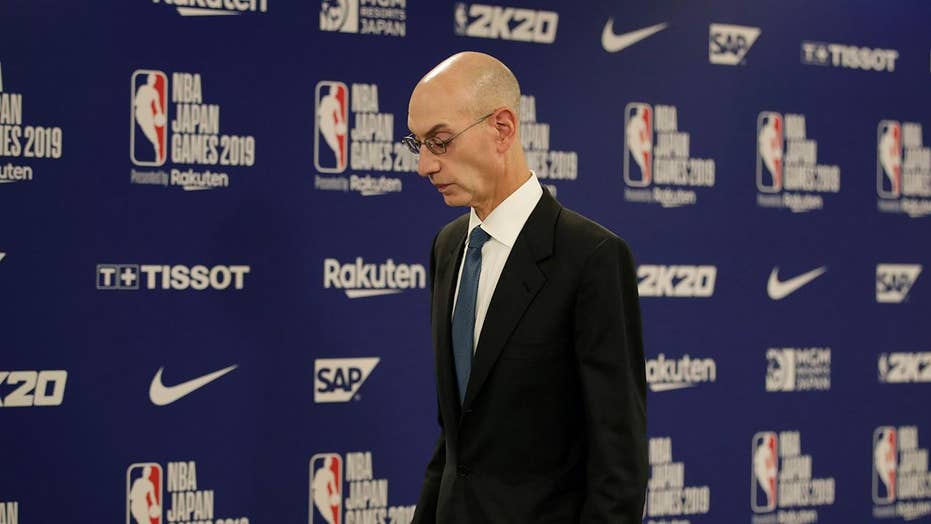 A Philadelphia 76ers fan said Wells Fargo Center security ejected him and his wife from the stands Tuesday after they brought in pro-Hong Kong signage for a preseason game against the Guangzhou Loong Lions.

Sam Wachs told CBS Philadelphia that he and his wife brought several pro-Hong Kong signs and were yelling “Free Hong Kong” during the game while also wearing a “Free Hong Kong” T-shirt. He said they were sitting behind the Guangzhou bench.

He said initially security took away the signs and then, after he started yelling, they were ejected.

The Wells Fargo Center, which plays host to the 76ers and the NHL’s Philadelphia Flyers, allows signs but they must be in “good taste” and management reserves the right to change its policy without notice.

The 76ers said that "ultimately the decision was made by Wells Fargo Center personnel to remove the guests from the premises," they told Fox News in a statement.

"The Wells Fargo Center’s event staff is responsible for the security and comfort of all guests at arena events, including 76ers games. At last evening’s game, following multiple complaints from guests and verbal confrontations with others in attendance, two individuals were warned by Wells Fargo Center staff about their continuing disruption of the fan experience," the team said.

"During the second quarter of last night's 76ers game, Well Fargo Center security responded to a situation that was disrupting the live event experience for our guests," the Wells Fargo Center said in a statement Wednesday. "After three separate warnings, the two individuals were escorted out of the arena without incident. The security team employed respectful and standard operating procedures."

The NBA has not commented on the incident.

The NBA only prohibits “obscene or indecent messages on signs or clothing.” There are no hard and fast rules on political messages.

Wachs’ ejection comes in the middle of a firestorm between the NBA and China over a tweet from Houston Rockets general manager Daryl Morey which read: “Fight for Freedom. Stand with Hong Kong.”

Though the tweet had been deleted, the NBA and the Rockets immediately began feeling the effect. Several Chinese sportswear brands suspended ties with the Rockets. China also canceled two NBA Cares events ahead of the preseason game between the Los Angeles Lakers and Brooklyn Nets.