Nearly a week after his younger brother was fatally stabbed outside a Tennessee bar, NFL quarterback C.J. Beathard posted an emotional tribute to his sibling on social media on Friday, just two days after Christmas.

Beathard, of the San Francisco 49ers, starts by thanking those who’ve reached out to his family with prayers and support following the tragedy. He then tells readers what type of person his brother Clayton was.

“Clay has the biggest heart of anyone I have ever known,” C.J. writes. “Anyone that knows him knows this, he would do absolutely anything for the people he loves.”

The post includes a photo of the three Beathard brothers: Clayton, who was 22; Tucker, 24; and C.J., 26. The brothers are grandsons of longtime NFL executive Bobby Beathard and the sons of country music songwriter Casey Beathard.

Like C.J., Clayton was a quarterback who had just completed his junior season with Long Island University in New York City. Tucker is a country music performer.

Early last Saturday morning Clayton was one of two men fatally stabbed in an altercation outside the Dogwood Bar & Grill in Nashville.

The other victim was identified as Paul Trapeni III, 21, a high school classmate of Clayton’s.

Mosley’s attorney claims his client, who is scheduled to appear in court Jan. 7, acted in self-defense.

"He is truly remorseful and regretful and sorry that this happened to every family that's involved here” defense attorney Justin Johnson told The Tennessean of Nashville, “but he wants everyone to wait to see the evidence as it comes out.”

C.J. Beathard immediately returned to Tennessee to be with his family upon learning about his brother’s death. He found out just hours before the 49ers were scheduled to play the Los Angeles Rams. 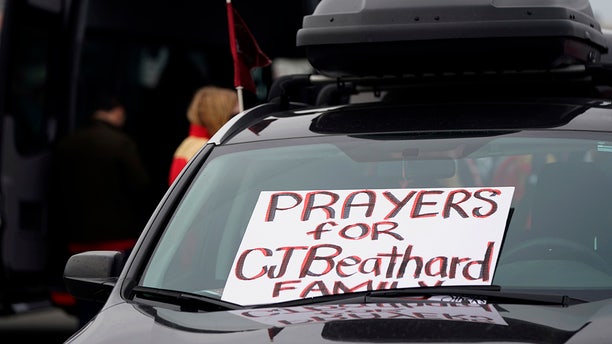 ​​​​​​​A sign for San Francisco 49ers quarterback C.J. Beathard is shown on a parked car at Levi's Stadium before an NFL football game between the 49ers and the Los Angeles Rams in Santa Clara, Calif., Saturday, Dec. 21, 2019. (Associated Press)

The game went on as scheduled, and the 49ers dedicated their victory to the memory of Clayton Beathard.

“I just know Clay is looking at us grieving down here right now saying ‘stay strong’ ‘I’m doing great u here’ and ‘I will see you soon,’” C.J. writes.

“What happened is absolutely awful and has been and will continue to be the hardest things my family and I have had to go through,” he continues. “But I can find some peace knowing that he is at peace in heaven right now, and I know without a doubt God will bring a whole bunch of good out of this.”

Tucker Beathard also posted an Instagram message, with a photo that showed the brothers spending time together at a sporting event.