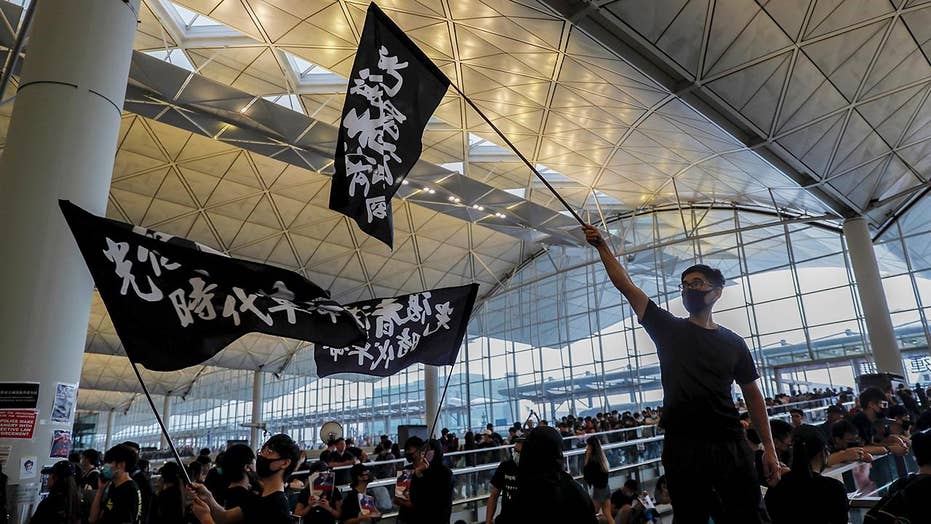 Hong Kong International Airport was shut down overnight leaving all departing flights grounded after thousands of protesters staged a sit-in in the main terminal.

President Trump said Tuesday that he's learned the Chinese government is sending its military to the Hong Kong border amid mounting clashes between riot police and pro-democracy protesters.

“Our Intelligence has informed us that the Chinese Government is moving troops to the Border with Hong Kong,” the president tweeted. “Everyone should be calm and safe!”

For more than two months, Hong Kong has seen mass protests urging democratic reforms and an investigation into police conduct.

The demonstrations, in turn, have raised concerns among U.S. officials about how far China might go to clamp down. “The United States, and all the freedom-loving nations around the world, must stand ready to swiftly move to defend freedom if China escalates the conflict in Hong Kong,” Sen. Rick Scott, R-Fla., said in a statement.

Speaking to reporters in New Jersey on Tuesday, Trump said, “The Hong Kong thing is a very tough situation.”

“Very tough,” he said. “We’ll see what happens. But I’m sure it’ll work out. I hope it works out for everybody, including China, by the way.”

The president also tweeted that some people are “blaming” him for the events in Hong Kong, though it was unclear what criticism he was referring to.

“Many are blaming me, and the United States, for the problems going on in Hong Kong. I can’t imagine why?” the president tweeted.

Earlier Tuesday, demonstrators shut down operations at Hong Kong's airport for the second straight day, flooding the main terminal. Officers armed with pepper spray and batons confronted the protesters, who used luggage carts to barricade entrances to the building.

Authorities were forced to cancel all remaining flights at one of the busiest airports in the world from 4:30 p.m. local time, just one day after protesters were able to successfully shut down all operations.

Protesters are demanding that Hong Kong leader Carrie Lam step down and pull legislation that would allow the government to extradite criminal suspects to mainland China, where they would likely face torture or unfair politically charged trials. Recent demonstrations have called for an independent inquiry into the city’s police and its alleged abuse of power.

Lam said Tuesday that dialogue would begin only when the violence stopped. She reiterated her support for the police and said they have had to make on-the-spot decisions under difficult circumstances, using "the lowest level of force."

Fox News’ Paulina Dedaj and The Associated Press contributed to this report.