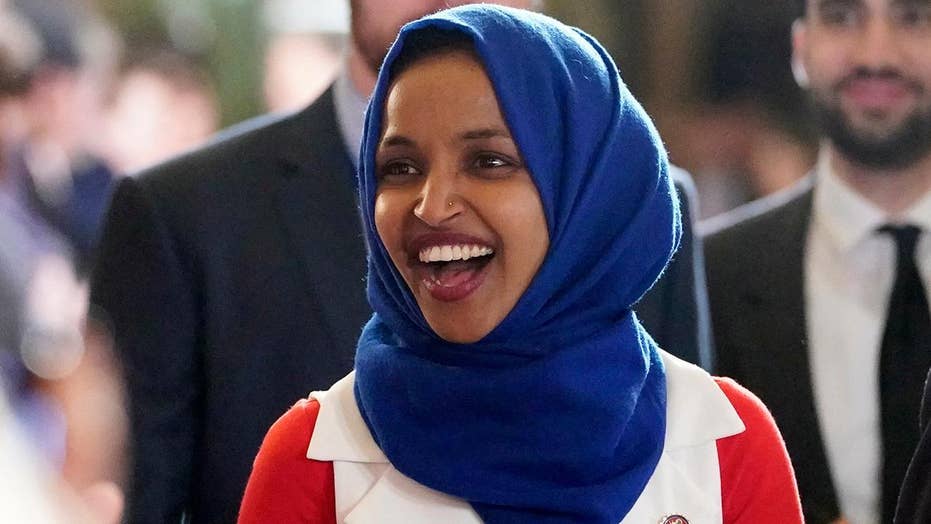 Senate Minority Leader Chuck Schumer condemned Minnesota Democratic Rep. Ilhan Omar's latest remarks on Israel as "wrong and hurtful" ahead of a planned congressional resolution to condemn anti-Semitism -- but Schumer also took a pointed shot at Senate Majority Leader Mitch McConnell, and suggested the GOP has its own problems with bigotry.

Several Democratic congressional aides, meanwhile, told Fox News on Tuesday that internal party disputes over how exactly to respond to Omar's persistent remarks were making it hard to get work done. House Speaker Nancy Pelosi, D-Calif., told Fox News late Tuesday that "there will be a vote this week" on the resolution, but not on Wednesday.

The resolution, written by Speaker Nancy Pelosi and other Democrats, comes after Omar's new remarks suggesting American supporters of Israel are pushing people to have "allegiance to a foreign country." It's at least the third time the Minnesota Democrat's words have put her colleagues in a more delicate spot than usual on the U.S.-Israel relationship, and the second time in two months that she's drawn a stern backlash from party leaders.

“I want to talk about the political influence in this country that says it is OK for people to push for allegiance to a foreign country," Omar said to applause at a Washington, D.C. activist cafe last week. "I want to ask why is it OK for me to talk about the influence of the NRA, of fossil fuel industries, or big pharma, and not talk about a powerful lobbying movement that is influencing policy."

McConnell told Fox News earlier in the day that Omar's comments were "disturbing" and that it's "time for America to think again about anti-Semitism."

He added: "It’s more fashionable among some people, especially among some of the freshmen in the House."

But Republican leaders should focus on conservatives accused of bigotry as well, Schumer said.

"I think every senator should condemn anti-Semitism," Schumer told Fox News. "What Congresswoman Omar said was wrong and hurtful -- and those who tried to connect 9/11 to all Muslims in West Virginia were wrong as well."

Responding to McConnell's comment  that there was an increase in anti-Semitism among freshman House Democrats, Schumer retorted: "Why doesn’t Senator McConnell talk about those who marched in Charlottesville?"

Added a senior House Democratic aide: "Here we are again, fighting with ourselves. I've spent another week dealing with this and not on policy."

The House did not directly rebuke Rep. Steve King, R-Iowa, by name last month after his comments that seemingly defended white nationalists, although King was stripped of his committee assignments.

Omar, however, remains on the Foreign Affairs Committee. A draft of the resolution does not rebuke Omar, a Somali-American and one of two Muslim women in Congress. But it sets out the history of anti-Semitism and bigotry in America, including anti-Jewish tropes about divided loyalties.

The document also rejects bigotry directed against Muslims after the Sept. 11, 2001, attacks.

It says the House "rejects anti-Semitism as hateful expressions of intolerance that are contradictory to the values that define the people of the United States."

The document is the written embodiment of the bind in which Omar has repeatedly put Democrats who have celebrated her election as part of the history-making class that helped flip control of the House in the November elections. The March edition of Rolling Stone magazine is covered by a photo of Pelosi and the next generation of House women, including Omar.

Omar says she's questioning the U.S. relationship with Israel and the influence game in Washington.

Still, senior Democrats were unmistakably wary of dealing with Omar's habit of inflaming a divide in the party over U.S.-Israel relations. Some demanded a retraction and apology from Omar, with one House chairman saying she invoked a "vile, anti-Semitic slur" and another congressional veteran tweeting that Omar "continues to mischaracterize support for Israel."

"I should not be expected to have allegiance/pledge support to a foreign country in order to serve my country in Congress or serve on committee," Omar tweeted back.

Last month, Omar ignited a bipartisan uproar in Washington and Minnesota when she suggested on Twitter that members of Congress are paid by the American Israel Public Affairs Committee to support Israel. AIPAC is a nonprofit organization that works to influence U.S. policy.

Many Jewish leaders denounced her remarks as reviving old stereotypes about Jews, money and power. She soon apologized and said, "Anti-Semitism is real and I am grateful for Jewish allies and colleagues who are educating me on the painful history of anti-Semitic tropes."

Many progressive Jews rushed to her defense, however, saying it's not inherently anti-Semitic to criticize Israeli government policies or AIPAC. Omar's spokesman, Jeremy Slevin, said she is not criticizing American Jews or their faith, only offering a "fair critique" of Israel's powerful lobby.

That episode came after Omar apologized for a 2012 tweet in which she said, "Israel has hypnotized the world."

Some have suggested that Omar be stripped of her seat on the House Foreign Affairs Committee, a move Pelosi and Chairman Eliot Engel, D-N.Y. have so far resisted. But Engel's statement on Friday mentioned his panel and conduct becoming a member of the House.

"It's unacceptable and deeply offensive to call into question the loyalty of fellow American citizens because of their political views, including support for the U.S.-Israel relationship," Engel said in a statement that also suggested she apologize.

Unlike the previous two incidents, Omar did not apologize this time.

"I am told every day that I am anti-American if I am not pro-Israel. I find that to be problematic and I am not alone," Omar tweeted Sunday. "I just happen to be willing to speak up on it and open myself to attacks."

Fox News' Chad Pergram and The Associated Press contributed to this report.