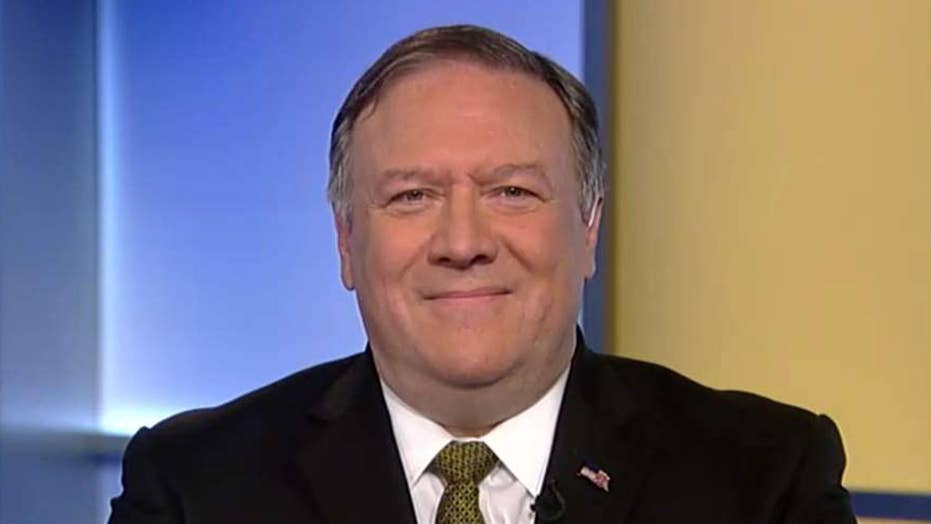 Pompeo: The problems in Venezuela have been years in the making

Secretary of State Mike Pompeo responds to Rep. Omar claiming the U.S. is to blame for the turmoil in Venezuela on 'The Ingraham Angle.'

Secretary of State Mike Pompeo didn't hold back Thursday when reacting to Minnesota congresswoman Ilhan Omar's comments insinuating the U.S. was partly to blame for the political crisis in Venezuela, calling her comments "ignorant" and "disgusting."

"So, the nicest thing I can say is it is unbelievable ignorance. It's just factually wrong," Pompeo said on the "Ingraham Angle."

REP. GABBARD ON VENEZUELA: U.S. SHOULD BROKER SOLUTION WITH RUSSIA

The freshman Democratic congresswoman has been critical of the U.S.'s role in Venezuela.

“A lot of the policies that we have put in place has kind of helped lead the devastation in Venezuela and we have sort of set the stage for where we are arriving today,” Omar told "Democracy Now!" “This particular bullying and the use of sanctions to eventually intervene and make regime change really does not help the people of countries like Venezuela and it certainly does not help and is not in the interest of the United States."

"The problems in Venezuela have been years in the making.  It's been a socialist regime, first with Chavez now with Maduro. The destruction of a wealthy nation. A nation with more oil reserves than any other country in the world," Pompeo said.

The Secretary of State emphasized his displeasure with Omar's comments and brought up that she sits on the House Foreign Affairs Committee.

"For a member of congress, who frankly, one who sits on an important national committee, making a statement blaming America first in this way, it's not only ignorant, it's disgusting," Pompeo said.