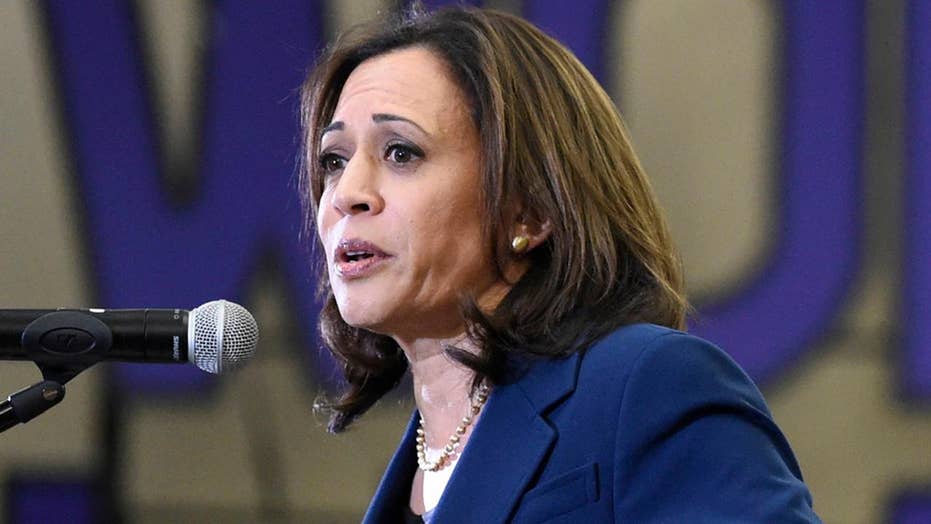 Sen. Kamala Harris will drop out of 2020 race

California Sen. Kamala Harris on Tuesday announced that she is withdrawing from the race for the Democratic presidential nomination, after failing to capitalize on early enthusiasm for her campaign and watching her poll numbers collapse.

"In good faith, I can’t tell you, my supporters and volunteers, that I have a path forward if I don’t believe I do," Harris wrote in an email to supporters. "So, to you my supporters, it is with deep regret -- but also with deep gratitude -- that I am suspending my campaign today."

Harris entered the race in January as a top contender and had a breakout moment in the first debate thanks to a memorable clash with then-frontrunner Joe Biden over his record on desegregation busing.

But she's struggled to shine through in subsequent debates and has seen her poll numbers plunge in recent months. In November, Harris dramatically cut her staff in New Hampshire, the state that holds the first primary in the race for the White House, to focus on Iowa.

The Harris campaign was also hemorrhaging money, spending more than what was coming in, amid tough media coverage about the campaign's struggles. She becomes one of the biggest candidates yet to drop out of the crowded 2020 primary field, two months before the lead-off Iowa caucuses. Her exit follows the withdrawal of former Texas Rep. Beto O'Rourke, another Democrat who entered the race to great fanfare but later struggled.

Campaigning in Iowa on Tuesday, Biden said of Harris, "I have mixed emotions about it because she is really a solid, solid person. And loaded with talent."

As word spread of her dropping out on Tuesday, Harris' husband, Douglas Emhoff, tweeted, "I've got you. As always."

Harris launched her campaign in front of 20,000 people at a chilly, outdoor event in January. The first woman and first black attorney general and U.S. senator in California's history, she was widely viewed as a candidate poised to excite the same segment of voters that sent Barack Obama to the White House.

She raised an impressive $12 million in the first three months of her campaign and quickly locked down major endorsements meant to show her dominance in her home state, which offers the biggest delegate haul in the Democratic primary contest.

But as the field grew, Harris's fundraising remained flat; she was unable to attract the type of attention being showered on Pete Buttigieg by traditional donors or the grassroots firepower that drove tens of millions of dollars to Elizabeth Warren and Bernie Sanders.

In a lengthy deep-dive into the California senator’s struggles on the campaign trail, The New York Times on Friday reported that many Harris advisers point to a July debate moment between Hawaii Rep. Tulsi Gabbard and the senator as “accelerating” her decline in the polls. In that debate in Detroit, Mich., Gabbard took aim at Harris’ record as a prosecutor, saying she was “deeply concerned” about it.

"There are too many examples to cite but she put over 1,500 people in jail for marijuana violations and then laughed about it when she was asked if she ever smoked marijuana," Gabbard said.

Harris also suffered from what allies and critics viewed as an inconsistent message. Her slogan "for the people," referenced her career as a prosecutor, a record the campaign struggled to pitch to the party's most progressive voters.

Through the summer, she focused on pocketbook issues and her "3 a.m. agenda," a message that never seemed to resonate with voters. By the fall, she had returned to her courtroom roots with the refrain that "justice is on the ballot," both a cry for economic and social justice as well as her call that she could "prosecute the case" against a "criminal" president.