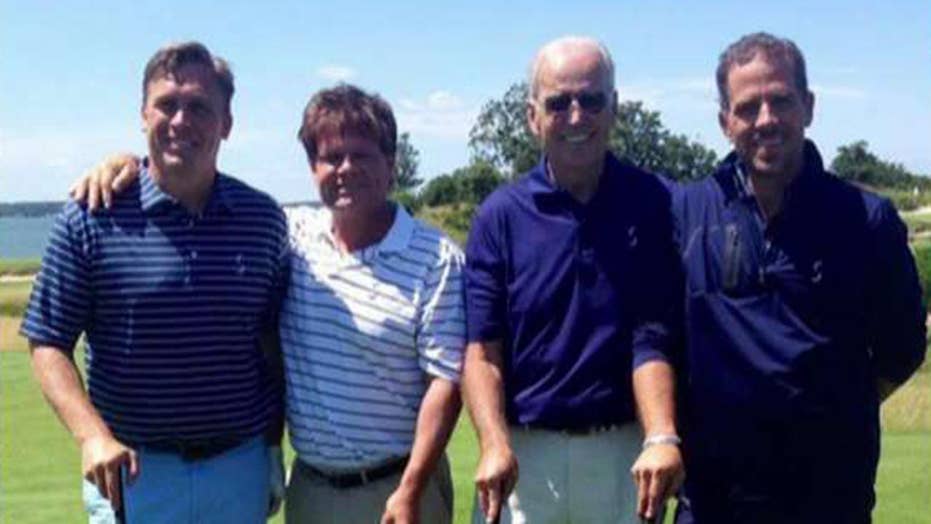 EXCLUSIVE: A photo obtained by Fox News' "Tucker Carlson Tonight" shows former Vice President Joe Biden and his son Hunter golfing in the Hamptons with Devon Archer, who served on the board of the Ukrainian natural gas company Burisma Holdings with Hunter.

Earlier this month, Joe Biden told Fox News in Iowa that he never discussed his son’s foreign business dealings with him.

“I have never spoken to my son about his overseas business dealings,” Biden said, pointing the finger at President Trump. “I know Trump deserves to be investigated. He is violating every basic norm of a president. You should be asking him why is he on the phone with a foreign leader, trying to intimidate a foreign leader. You should be looking at Trump.”

Hunter Biden told The New Yorker previously that he and his father had spoken “just once" about Hunter Biden's work in Ukraine.

A source close to Archer told Fox News the photo was taken in August 2014. Contemporaneous news reports indicate the vice president was in the Hamptons at the time.

Hunter Biden and Archer joined the Burisma Holdings board in April 2014.

Earlier this month, Trump suggested that despite his claims, Joe Biden seemingly discussed Ukraine matters with his son. The White House has sought to point to possible corruption by the Bidens, amid the House Democrats' formal impeachment inquiry against the president.

“And now, he made a lie when he said he never spoke to his son,” Trump said. “Of course you spoke to your son!”

Biden has acknowledged on camera that in spring 2016, when he was vice president and spearheading the Obama administration's Ukraine policy, he successfully pressured Ukraine to fire top prosecutor Viktor Shokin. At the time, Shokin was investigating Burisma Holdings — where Hunter had a lucrative role on the board despite limited relevant expertise.

The vice president threatened to withhold $1 billion in critical U.S. aid if Shokin was not fired.

TRUMP SEEKS TO TURN TABLES ON BIDEN AMID IMPEACHMENT PROBE

Shokin himself had already been widely accused of corruption.

Critics alleged Hunter Biden might have been selling access to his father, who had pushed Ukraine to increase its natural gas production.

Trump attorney Rudy Giuliani, on Sunday, suggested Shokin was the target of an international smear campaign to discredit his work.

In a combative interview on ABC News' "This Week" on Sunday, Giuliani presented what he said was an affidavit signed by Shokin that confirmed Hunter Biden was being investigated when Shokin was fired.

"I have an affidavit here that's been online for six months that nobody bothered to read from the gentleman who was fired, Viktor Shokin, the so-called corrupt prosecutor," Giuliani said. "The Biden people say that he wasn't investigating Hunter Biden at the time. He says under oath that he was." The Shokin affidavit purportedly said the U.S. had pressured him into resigning because he was unwilling to drop the case.

Personal attorney to President Trump Rudy Giuliani says if he is called to testify he will take that up with his client.

After anchor George Stephanopoulos expressed skepticism, Giuliani fired back: "How about if I -- how about if I tell you over the next week four more of these will come out from four other prosecutors? ... No, no, no, George, they won’t be [investigated], because they’ve been online for six months, and the Washington press will not accept the fact that Joe Biden might have done something like this."

"The question is," Giuliani asked, "when Biden and Obama saw that article, about how the son was pulling down money from the most crooked oligarch in Russia, did Obama call Biden in and say, 'Joe, how could you be doing this?'"