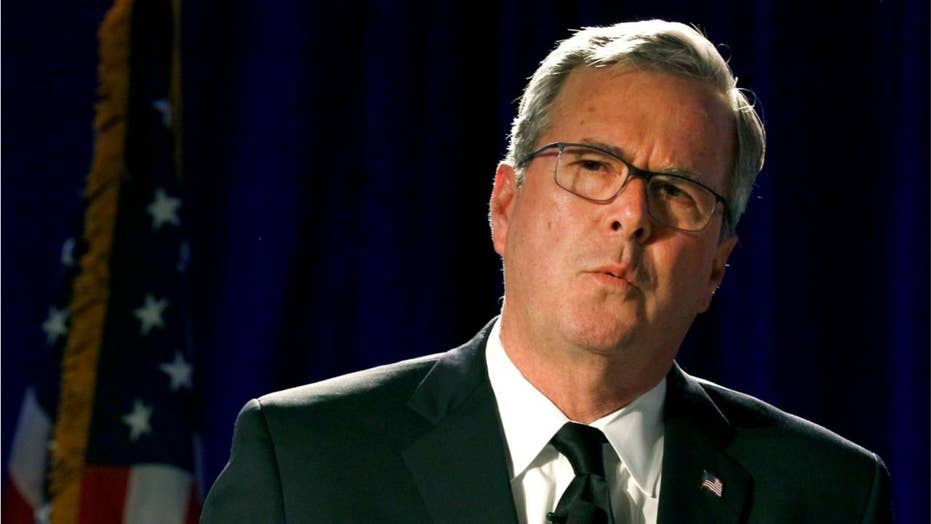 Jeb Bush calls for a Republican challenger in 2020

Former Florida Governor Jeb Bush is calling for a Republican challenger to President Trump in the 2020 elections.

Jeb Bush believes a Republican should challenge President Trump for the nomination in 2020 — slamming the president's "dangerous" policies on trade and other issues.

In the latest salvo between the two former rivals, Bush, who ran unsuccessfully for the GOP presidential nomination in 2016, made the comments Saturday during an interview with ex-Obama adviser David Axelrod.

“I think someone should run just because Republicans ought to be given a choice,” Bush said on CNN's "The Axe Files."  “It’s hard to beat a sitting president, but to have a conversation about what it is to be a conservative, I think it’s important.”

BETO BOASTS OF HAVING REPUBLICAN MOM, DESPITE HER FREQUENT VOTES FOR DEMOCRATS

Bush, whose father George. H.W. Bush was the 41st president of the United States and his brother, George W. Bush, was the 43rd, reportedly added that Republican voters should be given more of a choice between different ideologies.

"And our country needs to have competing ideologies that people -- that are dynamic, that focus on the world we're in and the world we're moving toward rather than revert back to a nostalgic time," he said on CNN, seeming to take aim at Trump's "Make America Great Again" 2016 slogan.

Bush elaborated about his disagreements with Trump during the interview.

"We haven't had a major crisis to deal with, but this unilateralism or going-alone-ism I think is really dangerous," Bush said of Trump's foreign policy moves, according to The Hill.

"Our friends no longer believe they can trust the United States and our enemies, in many cases, feel emboldened by this approach," he reportedly added. "I think it defies the...bipartisan kind of consensus on foreign policy that has, by and large, kept America safe."

According to The Hill, Bush also critiqued Trump's ability to handle the more symbolic aspects of running the country, such as responding during moments of crisis.

However, he did praise Trump's tax policy, regulatory changes and judicial nominations.

“You can honestly say he’s done good things in terms of policy and applaud them,” Bush said. “I think the symbolic, you know the kingly duties of the presidency, that’s where he falls short, and it’s important.”

The interview is the latest in a series of back-and-forth jabs between the two men.

Bush blasted Trump in September 2018 as a bad role model for young children, telling the Detroit Free Press: “He is not my role model as it relates to values I would share with my children and grandchildren.”

During a June 2018 interview with CNBC, Bush criticized Trump for going negative, saying that candidates must be civil with one another.

"The kind of campaign [Trump] ran would have never been successful a decade ago or in the age of [Ronald] Reagan and Bush, for example," said Bush.

BEHIND THE BUDGET 'GIMMICK' THAT COULD HELP SECURE TRUMP'S BORDER WALL

The ends don't justify the means, Bush said, referring to the way Trump goes negative. "It's not worth disparaging people."

Bush told Axelrod that Republicans need to "offer a compelling alternative" to Democratic ideas rather than just calling their ideas "bad."

So far, the only person to hint at challenging Trump for the 2020 GOP nomination is former Massachusetts Gov. Bill Weld, who formed an exploratory committee in February.