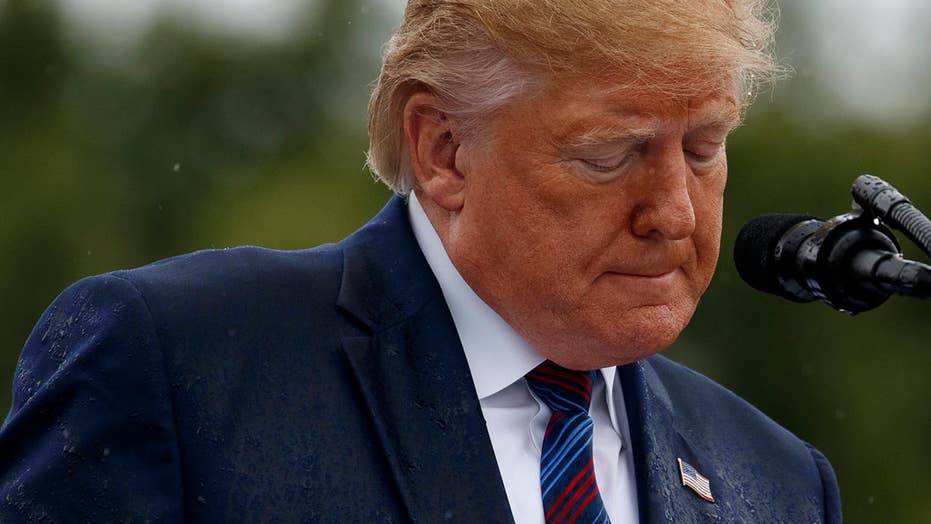 The inspector general for the intelligence community said late Monday that the whistleblower whose complaint touched off an impeachment inquiry claimed to have firsthand knowledge of misconduct -- a claim that appears to conflict with documents sent to Congress and the director of national intelligence.

The lengthy statement Monday was posted in response to questions, raised in the media and by congressional Republicans, about the disclosure form filed by the whistleblower, who first flagged concerns about President Trump's July phone call in which he asked the leader of Ukraine to "look into" actions by former Vice President Joe Biden and his son, Hunter Biden. The IG said the whistleblower stated on an initial form Aug. 12 "that he or she possessed both first-hand and other information."

However, the declassified whistleblower complaint sent to Congress last week stated: “I was not a direct witness to most of the events described. However, I found my colleagues’ accounts of these events to be credible because, in almost all cases, multiple officials recounted fact patterns that were consistent with one another.”

Additionally, Inspector General Michael Atkinson's letter sent on Aug. 26 to the director of national intelligence asserted that "the Complainant’s letter acknowledges that the Complainant was not a direct witness to the President’s telephone call….Other information obtained during the ICIG’s preliminary review, however, supports the Complainant’s allegation that, among other things, during the call the President ‘sought to pressure the Ukrainian leader.'"

While the declassified complaint left open the possibility of having some firsthand knowledge -- by saying he or she was not a direct witness to "most" events -- the latest ICIG statement suggests the apparent direct knowledge composed a key part of the initial filing. This would be at odds as well with acting Director of National Intelligence Joseph Maguire's testimony describing the claims as "hearsay."

The intelligence community inspector general did not respond to requests for comment from Fox News about the apparent discrepancy.

Although such a requirement does not appear in relevant law, it was seemingly an important procedural hurdle for intelligence community whistleblowers -- who had been required to certify that they had firsthand information in order to escalate their complaints.

“The [Intelligence Community Inspector General] cannot transmit information via the ICPWA based on an employee’s second-hand knowledge of wrongdoing,” the previous form stated under the bolded heading “FIRST-HAND INFORMATION REQUIRED." The old form went into effect in May 2018.

After media reports highlighted the change in the form, though, the intelligence community watchdog said the whistleblower had indeed filled out the older version of the form, which retained the requirement that whistleblowers have firsthand information.

The inspector general, however, indicated the form was updated in response to media inquiries.

The watchdog wrote: "In the process of reviewing and clarifying those forms, and in response to recent press inquiries regarding the instant whistleblower complaint, the ICIG understood that certain language in those forms and, more specifically, the informational materials accompanying the forms, could be read – incorrectly – as suggesting that whistleblowers must possess firsthand information in order to file an urgent concern complaint with the congressional intelligence committees."

John Kiriakou on the CIA's role in Trump-Ukraine controversy

"The concerns about an outdated Intelligence Community Inspector General complaint form are misguided," said attorney Andrew Bakaj. "All Inspectors General and their staff – Intelligence Community or otherwise – must vet an incoming complaint. A complaint is not accepted merely on its face. As we know, the ICIG initiated a preliminary investigation where the allegations were vetted through fact-finding via other, direct evidence. Thus, anyone suggesting otherwise lacks a fundamental understanding of the investigative process."

Mark Zaid, another attorney for the unnamed whistleblower, noted -- as the inspector general of the intelligence community did -- that there is no firsthand knowledge requirement in the law.

"In my more than twenty years of representing national security whistleblowers, and fifteen years since the Office of the Director of National Intelligence was created, I have never known nor observed a policy that a whistleblower must have first-hand information to file a complaint," Zaid said.

He added: "My experiences have always been that whistleblower must provide evidence that can be substantiated, whether through documents or identification of witnesses. No whistleblower law I know of has any personal knowledge requirement."