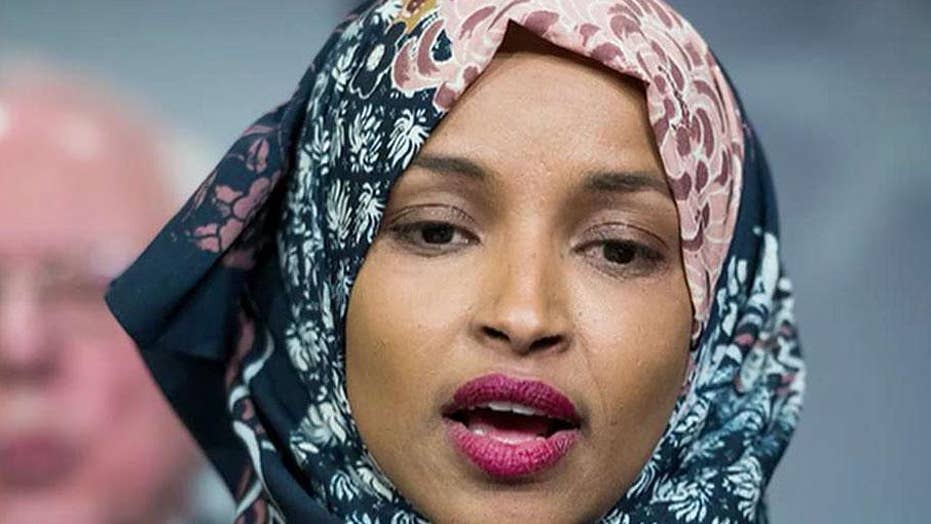 Rep. Ilhan Omar, D-Minn, reportedly retweeted then deleted a Twitter post that accused her of anti-Semitism after she was called out from both sides of the aisle for tweeting that the U.S. relationship with Israel is “all about the Benjamins, baby.”

The tweet she reportedly reposted was from Joshua Zeitz, a historian. The tweet in question began as though he was supportive of the freshman congresswoman's earlier comments. He wrote that he's "one of those American Jews who opposes the occupation, laments Israel’s anti-democratic drift, and doesn't regard the country as especially central to my Jewish identity."

The tweet continues, "And I know exactly what the congresswoman meant. She might as well call us hooked-nosed."

Mediaite picked up a screen grab of the retweet, which was soon deleted. There was speculation that Omar may have retweeted the critical tweet after only reading the first few sentences.

Fox News reached out to Omar's office early Monday and did not get an immediate response.

Greenwald accused McCarthy of targeting Omar and Tlaib for their numerous criticisms of Israel, to which Omar chimed in "It's all about the Benjamins, baby," quoting a 1997 rap song by Puff Daddy. She then doubled down when challenged by Batya Ungar-Sargon, the opinion editor of The Forward newspaper.

"Would love to know who @IlhanMN thinks is paying American politicians to be pro-Israel, though I think I can guess," Ungar-Sargon tweeted. "Bad form, Congresswoman. That's the second anti-Semitic trope you've tweeted."

In response, Omar tweeted "AIPAC!" referring to the American Israel Public Affairs Committee, which regularly has been accused by progressives of agitating for a conflict with Iran.

Omar retweeted other messages, including one that read: “She’s talking about the influence of Israel and this immediately gets twisted into anti-Semitism. Is she also Islamophobic for attacking Saudi’s influence on American politics in exactly the same way?”

She retweeted another post that read, “accurately describing how the Israel lobby works is not anti-Semitism.”