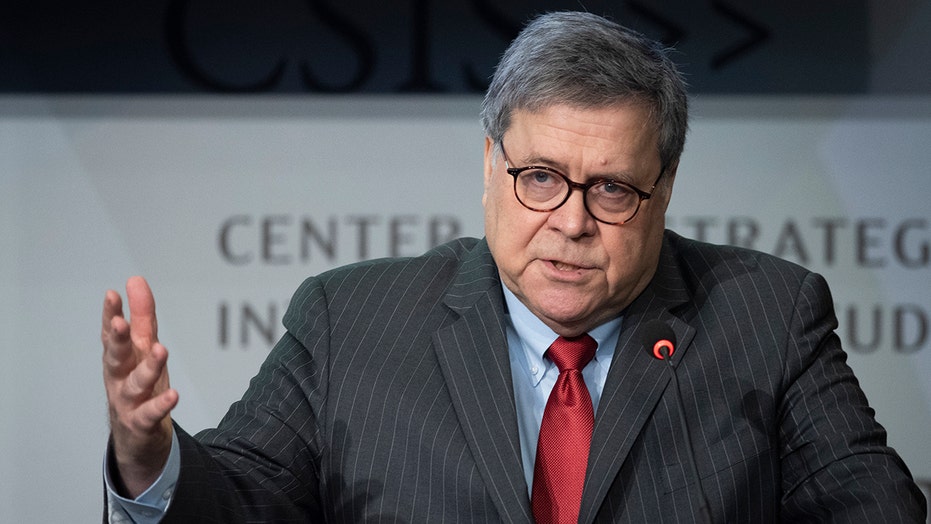 Attorney General Barr to testify on leadership of the DOJ

Barely a week after President Trump was acquitted in his Senate impeachment trial, a new administration controversy has Democrats demanding investigations and even the resignation of his top law enforcement official.

Lawmakers, including Sens. Elizabeth Warren and Richard Blumenthal, called on Attorney General Bill Barr to resign, while the House Judiciary Committee announced Wednesday it'll grill Barr during a March 31 hearing over his handling of the sentencing of former Trump confidant Roger Stone, among other issues.

"Congress must act immediately to rein in our lawless Attorney General," tweeted Warren, D-Mass. "Barr should resign or face impeachment."

“Attorney General William Barr ought to be ashamed and embarrassed and resign as a result of this action directly interfering in the independent prosecution of Roger Stone," added Blumenthal, D-Conn., who said the controversy is  another example of "political interference by the president to alter the independent decisions of the Department of Justice."

House Judiciary Committee Chairman Rep. Jerry Nadler, D-N.Y., didn’t answer a question on whether Barr should resign but said: “I think the behavior is extremely egregious.”

The latest Democratic fervor is over four career prosecutors withdrawing from the Stone case, including one quitting outright, after leadership at the Justice Department (DOJ) overruled their sentencing recommendations after Trump blasted them as too harsh.

Schumer also took to the Senate floor and torched Senate Republicans who acquitted Trump on two articles of impeachment for enabling Trump's conduct.

“Republicans thought the president would learn his lesson,” Schumer said in a veiled jab at Sen. Susan Collins, R-Maine. “It turned out that the lesson he learned was not that he went too far -- not that he needed to rein it in. The lesson the president learned was that the Republican Party will not hold him accountable no matter how egregious his behavior. Not now, not ever.”

"Like I take everything with him a grain of salt," said Graham, R-S.C.

Fresh off of weeks of impeachment, Democrats raised similar alarm bells and phrases as during the Ukraine saga, saying the Stone matter is another example of political interference, abuse of power and President Trump thinking he's above the law.

“It’s a shocking undermining of the rule of law in this country,” Schiff said, adding it’s “an abuse of the powers of his office.”

Another impeachment manager, lawyer and former judge, Rep. Sylvia Garcia, D-Texas, told Fox News: "This president’s behavior is just totally out of control. This is one of the most egregious things that I’ve ever seen."

She stopped short of calling for Barr's resignation but said: "We can't sit back and not do something. The question is what."

She ticked off the oversight tools House Democrats still have.

"It’s hearings. It's investigation. It's litigation. It's subpoenas. It's contempt. It's all the same ones we've always had, but it's a question of making sure that we're strategic in what we do," she said.

Federal prosecutors had on Monday recommended a sentence of between 7.25 and 9 years in prison for Stone's conviction on seven counts of obstruction, witness tampering and making false statements to Congress on charges that stemmed from former Special Counsel Robert Mueller’s Russia investigation.

But in a stunning reversal, as Fox News first reported, leadership at the DOJ overruled the prosecutors on the case, scaling back the proposed sentence for Stone, which immediately led Democrats to accuse Trump of interfering in the process.

TRUMP CONGRATULATES BARR ON 'TAKING CHARGE' OF ROGER STONE CASE, SAYS IT 'WAS TOTALLY OUT OF CONTROL'

Trump on Wednesday denied interfering in former associate Stone’s criminal case amid a political storm over his looming sentencing, while declining to say whether he’d consider a pardon for the GOP political operative.

“The fact is that Roger Stone was treated horribly and so were many other people,” Trump said. “Their lives were destroyed.”

He added: “Roger Stone -- nobody even knows what he did... Frankly, they ought to apologize to a lot of people whose lives they’ve ruined.”

Graham, a Trump ally, said he was briefed by the Justice Department Wednesday and said the reduced sentencing recommendation seemed to be "sound" policy. He said the guidelines called for three and a half to four and a half years but it could be enhanced to 7 to 9 years -- but it wasn't needed because Stone's alleged victim said he didn't feel threatened.

Still, he said, Trump shouldn't be talking about an open case.

"Sentencing guidelines call for three and a half to four and a half [years], but it's certainly up to the discretion of the judge still and that sentence enhancement would only go to seven to nine [years] if there was a threat of violence or somebody was actually hurt," Graham told Fox News. "And they tell me that the alleged victim here wrote a letter on behalf of Mr. Stone and felt like that, the actions did not rise at that level.

"I think they took that into consideration. But having said I don't think the President should have tweeted about an ongoing case," Graham added.

Stone is scheduled to be sentenced by Judge Amy Berman Jackson on Feb. 20 after his conviction stemming from charges of witness tampering, lying to Congress and obstruction.