Rep. Ilhan Omar, D-Minn., other Democrats, and a slew of commentators united in condemning President Trump on Wednesday night, after the crowd at a North Carolina "Make America Great Again" rally broke out in a striking chant of "send her back" while the president criticized Omar and other members of the so-called progressive Democrat "squad."

The three-word chant, which Trump did not respond to, referred to the president's tweet on Sunday in which he asked why unnamed "Democrat Congresswomen" don't "go back and help fix the totally broken and crime infested places from which they came, then come back and show us how it is done."

At the White House on Thursday, Trump said he "disagreed" with the chant, and was "not happy with it." He said he "started speaking very quickly" to halt the chant.

The president has affirmed that tweet over the weekend was referring to Omar, as well as Reps. Alexandria Ocasio-Cortez, Rashida Tlaib, and Ayanna Pressley -- all of whom, except Omar, were born in the United States. After a historic and bizarre floor fight, the Democrat-controlled House of Representatives formally condemned Trump's comments as "racist" on Tuesday.

"Representative Omar blamed the United States for the terrorist attacks on our country, saying terrorism is a reaction to our involvement in other peoples' affairs," Trump began on Wednesday night at the rally in Greenville, North Carolina, as the crowd booed loudly. "She smeared U.S. servicemembers involved in 'Black Hawk Down' -- in other words, she slandered the brave Americans who were trying to keep peace in Somalia," where Omar was born.

In April, a tweet from Omar resurfaced in which she claimed U.S. forces killed “thousands” of Somalis during the 1993 “Black Hawk Down” mission -- despite multiple analysts concluding the number was much smaller.

Shouts of "traitor" could then be heard in the crowd.

"And at a press conference just this week, when asked whether she supported Al Qaeda  -- that's our enemy, they are a very serious problem, that we take care of, but they always seem to come along somewhere -- she refused to answer," Trump went on. "Omar blamed the United States for the crisis in Venezuela. I mean, think of that one. And she looks down with contempt on the hardworking Americans, saying that ignorance is pervasive in many parts of this country."

As a handful of people began yelling, "Send her back," Trump added: "And obviously and importantly, Omar has a history of launching vicious anti-Semitic screeds."

MAYHEM IN THE HOUSE OF REPRESENTATIVES -- CHAIR DOES 'GAVEL DROP' AND BAILS, PELOSI'S SPEAKING PRIVILEGES REVOKED, AS DEMS CONDEMN TRUMP

The "send her back" chant began, audibly and in earnest, as Trump stepped away briefly from the podium. 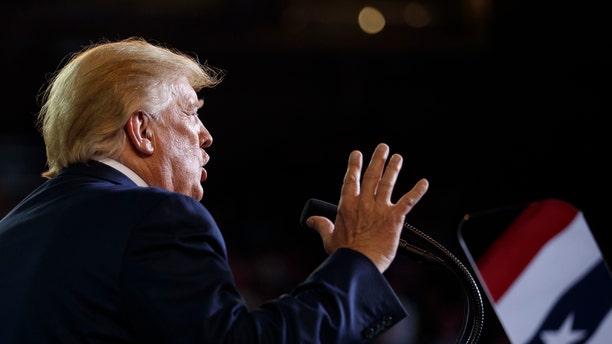 The president did not acknowledge the crowd's chant, and returned after a pause to continue on with his remarks.

"And she talked about the evil Israel and it's all about the Benjamins. Not a good thing to say," Trump concluded, noting that there were "many other things" he could mention about Omar before turning to attack Tlaib.

Omar apologized this year for posting a 2012 tweet that even top Democrats have also called anti-Semitic: "Israel has hypnotized the world, may Allah awaken the people and help them see the evil doings of Israel. #Gaza #Palestine#Israel," Omar wrote.

In response on Wednesday evening, Omar, a Somali-born U.S. citizen, quoted civil rights activist and poet Maya Angelou on Twitter: "You may shoot me with your words, You may cut me with your eyes, You may kill me with your hatefulness, But still, like air, I’ll rise."

Omar later added, "I am where I belong, at the people’s house and you’re just gonna have to deal!"

She also retweeted a post from California Rep. Ted Lieu, a Democrat, calling out the "racist chant" and urging people to "vote, donate & organize like never before" to save "the soul of our country."

Ocasio-Cortez sent out a tweet just before 1:00 a.m. ET, telling "those scared for our future: we can get through this better than we started."

WATCH: IN BIZARRE CLIP, OMAR JOKES ABOUT PEOPLE WHO SAY 'AL QAEDA' IN A MENACING TONE

"It’s vile. It’s cowardly. It’s xenophobic," Harris wrote on Twitter. "It’s racist. It defiles the office of the President. And I won't share it here. It’s time to get Trump out of office and unite the country."

Wrote Gillibrand: "Whether it's 'send her back' or 'lock her up,' 'there has to be some form of punishment' or 'grab her by the p***y'—the throughline is contempt for women and anyone who threatens this president's fragile ego. He should be afraid. We are his worst nightmare. And we will beat him."

Conservative commentator Ben Shapiro, meanwhile, called the moment "vile," even as he reiterated that Omar's own remarks were deserving of criticism.

Omar previously has been condemned by prominent members of both parties for making remarks widely deemed anti-Semitic.

This past March, the Democrat-led House overwhelmingly passed a bipartisan resolution that indirectly condemned Omar's repeated "anti-Semitic" and "pernicious" comments, including some in which she suggested Jewish politicians in the U.S. were bought and paid for.

Omar has also casually referred to 9/11 as a day when "some people did something," leading Muslims to lose civil liberties -- rankling Trump and top Republicans, who called the remarks clearly insensitive. Trump again emphasized those remarks on Wednesday.

Several other reporters and conservatives agreed with Shaprio's assessment.

The Daily Wire's Ryan Saavedra, for example, said, "Anyone who follows me knows that I cover the far-left and that includes Rep. Ilhan Omar (D-MN) and I'm aggressive in my reporting which comes from a conservative angle With that said, chanting 'send her back' at Omar is not good Keep in mind, I am one of her harshest critics."

Town Hall editor Guy Benson echoed that sentiment, writing, "'Send her back' is an appalling chant. Omar is a US citizen. My less-catchy chant would be: 'Condemn her bigotry, combat her radicalism, and investigate her seriously alleged fraud!'"

Speaking to reporters earlier in the day, Trump said that he hoped people were looking into "the fact that [Omar] was married to her brother." Trump had specificially been asked by a reporter about whether Omar had committed marriage fraud, and clarified, "I know nothing about it."

In June, a report by Minnesota state campaign finance officials revealed Omar and her current husband, Ahmed Hirsi, filed joint tax returns in 2014 and 2015, when Omar was reportedly married to another man. Omar engaged in a civil marriage with Ahmed Nur Said Elmi in 2009, and the couple apparently separated in 2011 without formally petitioning for divorce until 2017.

Prior to her marriage with Elmi, Omar had supposedly wed Hirsi in the Muslim "faith tradition," but the couple separated shortly afterwards. Omar did not officially marry Hirsi until 2018, after reconciling with him and splitting with Elmi.

Tax experts say the IRS only permits joint filings if a couple is in a state that legally recognizes the couple as married.

In his wide-ranging rally later Wednesday, Trump went point-by-point, member-by-member, as he unloaded on the squad. In his critique of Tlaib, Trump told the crowd that she had "used the F-word to describe the presidency and your president." 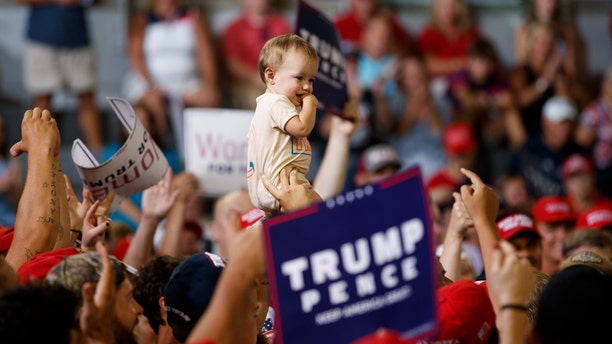 A baby is held high in the audience as President Donald Trump speaks at a campaign rally at Williams Arena in Greenville, N.C., Wednesday, July 17, 2019. (AP Photo/Carolyn Kaster)

"That's not nice, even for me," Trump said. "That's not somebody who loves our country."

The president then took aim at Ocasio-Cortez, whom he mocked for her "three different names" as well as saying she inaccurately described the migrant holding facilities at the southern border as concentration camps.

Of Pressley, Trump said the Massachusetts congresswoman "thinks that people with the same skin color all need to think the same. She said, 'we don't need any more brown faces that don't want to be brown voices, we don't need black faces that don't want to be a black voice,'" a reference to remarks Pressley gave at a conference this past weekend. "Can you imagine if I said that?"

“We all know that [AOC] and this crowd are a bunch of communists, they hate Israel, they hate our own country, they’re calling the guards along our border—the Border Patrol agents—concentration camp guards,” South Carolian GOP Sen. Lindsey Graham told Fox News earlier this week.

At the top of his remarks Wednesday night, Trump celebrated the House's decision to shelve impeachment proceedings against him. The president repeatedly thanked the 137 Democrats who joined Republicans and voted to kill the articles of impeachment.

"I just heard that the United States House of Representatives has overwhelmingly voted to kill the most ridiculous project I ever worked on," Trump said, referring to an impeachment resolution proposed by Rep. Al Green, D-Texas, that was widely opposed by House Speaker Nancy Pelosi, D-Calif., and other top Democrats.

Trump called the 332-95 vote to sideline the impeachment resolution Wednesday "totally lopsided" and a "slaughter," and touted the strong economy and low unemployment numbers under his administration.