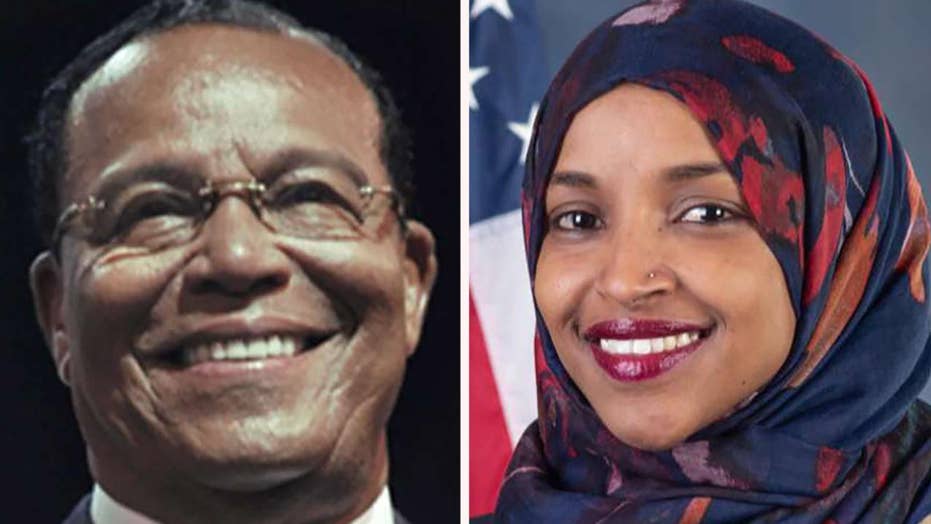 Minnesota Democratic Rep. Ilhan Omar, whose previous comments on Israel were condemned as anti-Semitic just weeks ago by senior members of her own party, is again under fire for suggesting Wednesday night that some politicians in Washington are "pushing for allegiance" to Israel.

Michigan Democratic Rep. Rashida Tlaib, who was seated next to Omar during her comments, made a similar remark in January, writing on Twitter that Senate Republicans were more loyal to Israel than their own country. The accusation that Jewish politicians could be vulnerable to having "dual loyalties" has been made for centuries in various contexts, and has been seen widely as a religious-based attack intent on undermining their leadership.

“I want to talk about the political influence in this country that says it is OK for people to push for allegiance to a foreign country," Omar said to applause. "I want to ask why is it OK for me to talk about the influence of the NRA, of fossil fuel industries, or big pharma, and not talk about a powerful lobbying movement that is influencing policy."

Omar added that she believed she has been called anti-Semitic only because she is Muslim, and that her criticisms of Israel are reasonable and well-founded.

"It is as if every time we say something that is supposed to be about foreign policy or engagement or the efficacy of ending oppression or the freeing of every human life and wanting dignity, we get labeled something that ends the discussion, because we end up defending that and no one gets to have the broader debate about what is happening in Palestine," Omar said.

A video of her remarks, made at a Washington activist cafe, was published by the GOP War Room YouTube channel.

Since becoming the first Somali-American woman elected to Congress in November, Omar has issued a steady stream of statements targeting Israel and its support in Congress. Omar issued a sort of apology earlier this month for writing that fervent defenders of Israel in Washington were motivated by money:  "It's all about the Benjamins, baby."

Faced with swift condemnation from House Speaker Nancy Pelosi and other Democrats, she eventually followed up by apologizing for using "tropes," while still highlighting what she called the "problematic role of lobbyists in our politics, whether it be AIPAC [the American Israel Public Affairs Committee], the [National Rifle Association] or the fossil fuel industry." (All appears to have been forgiven: Pelosi, along with New York Democratic Rep. Alexandria Ocasio-Cortez, appeared smiling beside Omar in a recent issue of Rolling Stone magazine.)

Omar also apologized last month for posting a 2012 tweet that top Democrats have also called anti-Semitic: "Israel has hypnotized the world, may Allah awaken the people and help them see the evil doings of Israel. #Gaza #Palestine#Israel," Omar wrote.

"You know at some point, someone's going to have to consider the possibility she says these things because she believes them," Texas GOP Sen. Ted Cruz's national security adviser, Omri Ceren, wrote on Twitter.

FARRAKHAN, WITH HIS OWN HISTORY OF ANTI-SEMITIC COMMENTS, TELLS 'SWEETHEART' OMAR NOT TO APOLOGIZE FOR ISRAEL REMARKS

In The Washington Examiner, columnist Philip Klein added that Omar was again using a "classic anti-Semitic dual loyalty smear," and charged that Omar -- who "earlier this month was forced into a hostage tape style fake apology for anti-Semitic tweets" -- remained entirely "unrepentant."

New York Times op-ed columnist Bret Stephens wrote: "Rep. @IlhanMN seems to calculate that if she makes only one blatantly anti-Semitic remark per week, progressives will forgive her. Is she right?"

FILE - In this Feb. 5, 2019, file photo, Rep. Ilhan Omar, D-Minn., listens to President Donald Trump's State of the Union speech, at the Capitol in Washington. In Omar's Minnesota district, both Jews and Muslims voiced concern about an inflammatory tweet on Israel that had the congresswoman apologizing within hours. While some Jews said she was being unfairly judged, others said they feared she was being slow to learn from previous criticism. (AP Photo/J. Scott Applewhite, File)

In New York magazine, Jonathain Chait wrote, "I was inclined to give Rep. Omar the benefit of the doubt when she slightly echoed anti-Semitic tropes, but this latest comment erases all doubt."

Asserting that Omar's remarks Wednesday were "much worse" than her previous anti-Israel comments, Chait charged that Omar was employing a "historically classic way of delegitimizing [Jewish] participation in the political system."

"Whatever presumption of good faith she deserved last time should be gone now," Chait concluded.

Omar has long argued that America is too close to Israel, and denies that she is anti-Semitic. Last month, Omar argued in a Yahoo! News interview that Israel could not be considered a democracy and compared it to the Islamic theocracy in Iran.

"When I see Israel institute laws that recognize it as a Jewish state and does not recognize the other religions that are living in it, and we still uphold it as a democracy in the Middle East I almost chuckle because I know that if we see that any other society we would criticize it, call it out," she said. "We do that to Iran, we do that to any other place that sort of upholds its religion. And I see that now happening with Saudi Arabia and so I am aggravated, truly, in those contradictions."