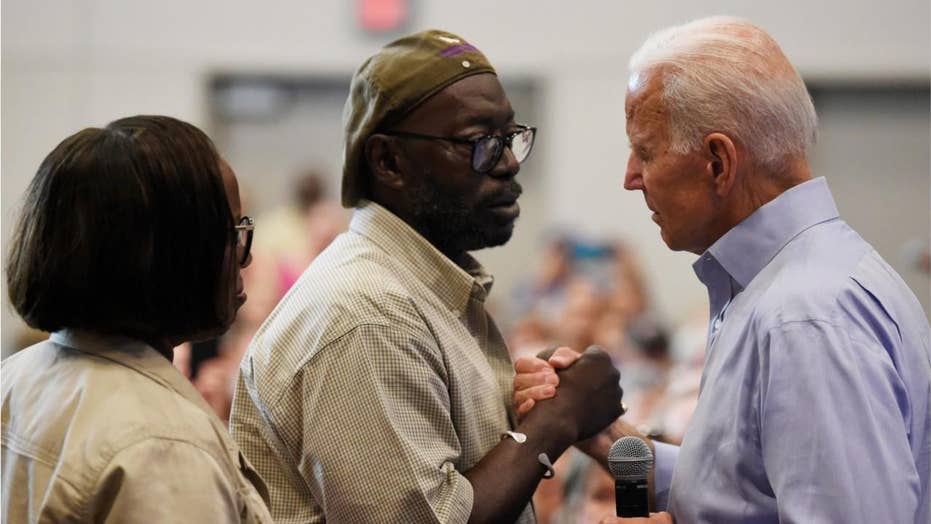 Former Vice President Joe Biden made another stunning campaign promise, this time to cut prison incarceration by "more than" 50 percent.

Speaking with an ACLU member at a campaign event on in South Carolina over the weekend, Biden was asked about the initiative being headed by the organization to develop a "roadmap for cutting incarceration by 50 percent."

"Do you commit to cutting incarceration by 50 percent?" the man, who identified himself as an ACLU member, asked.

BIDEN RELEASES FINANCIAL INFO, MADE MORE THAN $15.5M BEFORE TAXES OVER PAST TWO YEARS

When pressed by the man for a "yes or no" answer, Biden exclaimed: "The answer's yes, and I've got a better plan than you guys have."

The Democratic frontrunner has had a turbulent few weeks on the campaign trail. At last month's Democratic debate, he was confronted by Sen. Kamala Harris, D-Calif. He was also criticized by other Democratic candidates for his remarks about working with segregationist Democratic colleagues in the Senate. Biden issued an apology to a South Carolina audience on Saturday.

"Was I wrong a few weeks ago to somehow give the impression to people that I was praising those men who I successfully opposed time and again? Yes, I was. I regret it," Biden said. "I’m sorry for any of the pain or misconception they may have caused anybody.”

Biden still has a commanding lead in the Democratic field, but some of his contenders have surged since the debate, with a burst of new polls suggests the first round of Democratic presidential nomination debates has reshaped the race.

The polls – a Quinnipiac University national poll, a USA Today/Suffolk University survey in Iowa and a CNN/SSRS national poll – indicate a big boost for Sen. Kamala Harris of California and a narrowing of the lead Biden has enjoyed since the former vice president launched his White House bid just over two months ago.

The surveys also point to a drop in support for Sen. Bernie Sanders of Vermont, who fell from his second-place perch to fourth.