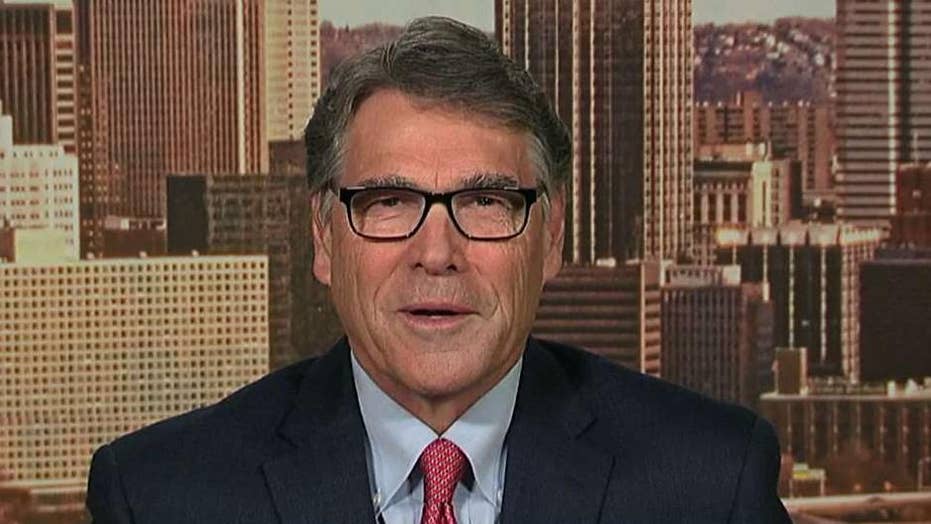 Energy Secretary Rick Perry said Tuesday that Democrats are living in a "fantasy world" when it comes to their climate change rhetoric and accused them of twisting the truth to help bolster their political talking points.

Perry was responding on "America's Newsroom" to 2020 presidential hopeful Sen. Bernie Sanders, I-Vt., who said climate change was a bigger threat to national security than ISIS or Al Qaeda while campaigning in Iowa on Sunday.

"I think they live in a fantasy world. The reality is that the United States is lowering emissions -- one of the only countries in the world," the former Texas governor said. "I think about all the 194 [countries] that signed onto the Paris accord, the U.S. is the one that's leading the world in reducing emissions... America [is] transitioning away from old inefficient power plants to natural gas plants."

Perry added, "Maybe they think, they being the Democrats that are running for president, that China would be a better place for all of this manufacturing to occur. It is fantastical when you think about the true misrepresentation of the truth that the Democrats are spewing out there."

He also claimed the federal government is exploring new ways to reduce harmful emissions and said Democrats are trying to bury the truth because it conflicts with their political rhetoric.

"We are addressing it. I think that's one of the things that the... media needs to take a second look at, what's going on. I'm leaving here from Pittsburgh headed to... our national energy technology lab, where we're seeing that type of technology being developed to reduce emissions -- to come up with the technologies and innovation," he said.

"Fifteen years ago people told us that we'd found all the oil and gas that there was. There was no more. Innovation changed that -- whether it's hydraulic fracturing, directional drilling. And now natural gas is replacing a lot of those old inefficient plants and we're driving down emissions. That's the story that the Democrats don't want to talk about because it doesn't meet their narrative of going out and trying to scare the American public into potentially voting for them. I don't think the American people are going to be fooled by that rhetoric."

Perry spoke ahead of his visit with President Trump to Shell’s soon-to-be-completed Pennsylvania Petrochemicals Complex, which critics have said will be a major air polluter. The plant will turn natural gas deposits into plastics, though critics have called out the harmful environmental effects of plastics.

Perry said the world must address the issue of plastics polluting oceans, but products made up of polyethylene are used widely, including for wind turbines, solar panels, heart valves and auto parts.

"You can't have it both ways," Perry said, "and the Democrats are trying to."