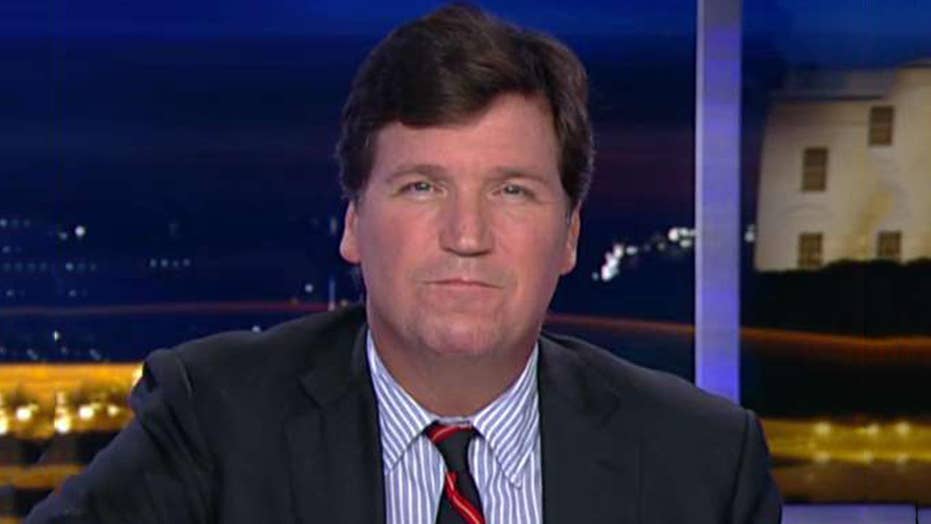 Tucker: Democrats have no actual plan for impeachment

If you could remember that far back, Democrats formally began impeachment proceedings against President Trump on September 24th of this year.

On Wednesday, nearly two months later, they held their first public hearing. CNN went wall-to-wall with it all day under strict instructions from their reclusive "Dwarf King" to squeeze every last drop of partisan drama from the proceedings.

If you got stuck in an airport and happened to catch some of it, you can testify to how pointless and tiresome the whole thing was.

If nothing else, it made you realize that Democrats really have no master plan for impeachment. Whatever you may suspect, they clearly haven't thought it through. They're making it up as they go along, as most people in D.C. are, and in the end, impeachment almost certainly will hurt them. The whole premise is just too dumb not to hurt them.

But in the meantime, here's the good news: We did solve at least one nagging mystery -- Trump's crime. It's never been clear exactly what Democrats believe is the impeachable offense here. But now we know. It's this:

Donald Trump: Wouldn't it actually be wonderful if we could get along with Russia? Wouldn't that be nice?

If we get along with Russia, we'd go out together with others and we knock the hell out of ISIS. Wouldn't that be great?

So that was August of 2016. "Wouldn't it be great if we got along with Russia?" It turns out that voters agreed with that view. They elected Donald Trump president just three months after he said that.

But permanent Washington was appalled -- scandalized, really. Getting along with Russia isn't simply considered an alternative view here. It's a crime.

Listen to State Department veteran George Kent, one of the witnesses who testified Wednesday, explain that conflict with Russia is the entire point of American foreign policy.

George Kent, deputy assistant secretary of state for Europe: The United States has a very clear national interest at stake in Ukraine. Ukraine's success is very much in our national interest in the way we have defined our national interest broadly in Europe for the past 75 years. Our strategic game for the entirety of my foreign service career is not possible without a Ukraine whole, free and at peace, including Crimea and the Donbass territories currently occupied by Russia.

OK, you need to get a pen. This is getting complex, but it's important.

"The territorial integrity of Ukraine is essential to America's national interest." Now, our own borders mean nothing, of course -- defending them is racist, and it's immoral. Everyone in Washington knows that and they'll remind you of it, if you think otherwise.

If we're really being honest here, Russia poses no threat to the United States at all.

But Ukraine's borders -- and by the way the borders of Crimea and Donbass, wherever those places might be --  those are vitally important matters and have been, George Kent tells us, for 75 years or so. Or as he puts it, "for the entirety of my foreign service career."

So back off Donald Trump, with your wild ideas about changing things simply because the world is totally different now, and voters want to move on! Moving on isn't allowed here. Change is prohibited.

William Taylor, the charge d’affaires in Kiev: Ukraine is a strategic partner of the United States, important for the security of our country, as well as Europe. Ukraine is on the front line in the conflict with a newly aggressive Russia.

OK, for God's sake, America, listen to what this man is saying. And we're quoting: "Ukraine is on the front line in a conflict with a newly aggressive Russia."

So we need Ukraine like a drowning man needs a life ring, -- or more precisely, like an alcoholic needs a drink. We've been doing it this way for so long that we are addicted. Too many careers depend upon keeping our assumptions exactly what they were in the fall of 1977, when fighting the Soviet menace consumed the lion's share of our federal budget. By the way, if we don't, they could invade Afghanistan, which is strategically essential, as you know.

Why exactly are we doing things this way? How does it help America? For daring to ask that question -- which is the only question that matters ever -- they are impeaching Trump.

So here in Washington, that's what we're doing. Our real fear is that the rest of America will at some point discover that the Soviet Union no longer exists. We're afraid they'll learn that Russia's economy is now the size of Italy, that their military budget is one-tenth of ours. That their only aircraft carrier needs to be towed around the ocean because it's broken; that their best scientists and engineers have moved to New Jersey, leaving them unable to build a working escalator. That, if we're really being honest here, Russia poses no threat to the United States at all.

Washington doesn't want you to know that, which is why William Taylor and George Kent and many of their friends spend all day insisting that Russia remains a moral threat to our country.

Kent: Ultimately, Ukraine is on a path to become a full security partner of the United States within NATO. U.S. and NATO ally trainers develop the skills of Ukrainian units at Yavari near the Polish border and elsewhere.

Taylor: We and NATO began to provide military assistance to Ukraine's Armed Forces in the form of training, advice, military equipment and weapons.

We're fighting them in Crimea. Why? So we don't have to fight them in Cleveland.

Trump, by the way, disagrees with that. He is saying things like this:

Trump: If you look at the Ukraine, we're the ones always fighting on the Ukraine. I never hear any other countries even mentioned. Ukraine is very far away from us. How come the countries near the Ukraine, surrounding the Ukraine -- how come they're not opening up and they're not at least protesting? I never hear anything from anybody except the United States. What I'm saying is NATO is obsolete. NATO is obsolete, and it's extremely expensive to the United States, disproportionately so.

Now, it's not a sentence it's going to get you 800 on the SAT, obviously. But there is a kind of simple brilliance to it. It implies a question that official Washington cannot answer. And the question is this: Why exactly are we doing things this way? How does it help America?

For daring to ask that question -- which is the only question that matters ever -- they are impeaching Trump. Listen to Adam Schiff admit that.

Rep. Adam Schiff, D-Calif, House Intelligence Committee chairman: While the founders did not intend that impeachment be employed for mere differences over policy, they also made impeachment a constitutional process that the Congress must utilize as necessary.

Do you want to know what the left is up to? It's not hard, actually, to divine what they're up to. There's a code. Write this down: Listen carefully to what they deny. That is always the real answer.

So you're not supposed to impeach the president over policy differences, says Adam Schiff. And he's right about that. And yet, that is exactly -- indeed precisely -- what they are doing.