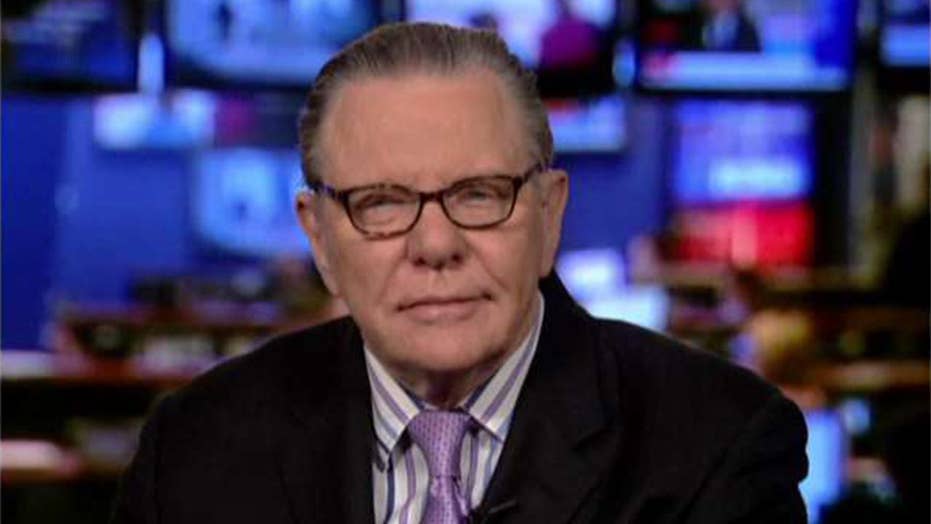 Gen. Keane: Iran's actions in response to sanctions are backfiring

When a U.S. Navy ship downed an Iranian drone in the Strait of Hormuz Thursday it sent an important message to the mullahs who rule the Islamic Republic: aggression has consequences and America will strike back when provoked.

During the Obama administration, Iran’s leaders figured out that President Barack Obama was desperate to secure his place in history by reaching a deal to stop Iran from developing nuclear weapons.

TRUMP: US WARSHIP DESTROYED IRANIAN DRONE IN STRAIT OF HORMUZ

Much to the disappointment of the mullahs, President Trump has made clear he is no pushover. Recognizing that the Iran nuclear deal was a bad bargain he withdrew the U.S. from the agreement and placed crippling economic sanctions on Iran.

Iran is now taking aggressive actions in the Persian Gulf and threatening to close the Strait of Hormuz, cutting off oil shipments, to get sanctions relief. But unlike Obama, Trump is playing hardball and not giving in to Iranian threats.

In announcing the downing of the Iranian drone Thursday in a defensive action by a Navy warship appropriately named the USS Boxer, President Trump said: “The U.S. reserves the right to defend personnel, facilities, interests.” The president said the drone came within 1,000 yards of the U.S. ship and ignored several calls to stand down.

Trump called the flight of the drone within the USS Boxer’s defensive perimeter a “hostile” action by Iran.

The Iranians have been pushing to find how out far they could go before drawing a U.S. response. Now they know.

There have been several months’ worth of provocations by Iran in the shipping lanes of the Persian Gulf and by its proxies in the region. I have previously said that a U.S. response was necessary to let the mullahs know that free transit of all vessels in this waterway is a vital U.S. interest.

President Trump couldn’t let Iran’s latest aggressive action pass without a response if he expects Iran and other nations to respect the U.S. and not conclude they can attack our forces at will, without fear of retaliation

President Trump couldn’t let Iran’s latest aggressive action pass without a response if he expects Iran and other nations to respect the U.S. and not conclude they can attack our forces at will, without fear of retaliation.

The U.S. action knocking the Iranian drone out of commission appears to have most likely fallen within the normal rights of an American ship to protect itself. This was an act of self-defense.

Depending on the amount of time the drone spent probing the defenses of the U.S. ship, the U.S. commander may have had time to send word up the chain of command. But all our warships have rules of engagement allowing them to take action against imminent threats.

This becomes more interesting, however, in light of reports that Iran seized a United Arab Emirates oil tanker and is claiming this was an anti-smuggling operation.

The Islamic Revolutionary Guards Corps of Iran announced Thursday that it had detained a foreign oil tanker it said had been smuggling fuel – days after a UAE vessel with the same name disappeared in the Persian Gulf.

It is unwise to take any statement coming from Iran at face value. In this case, the Revolutionary Guards run a lot of oil smuggling operations themselves, trying to evade sanctions to generate hard currency. It’s possible the UAE ship was a competitor that Iran decided to take out.

But it’s also entirely possible that the seizure of the UAE tanker and the probing of a U.S. Navy ship by the Iranian drone were provocations designed to show Iran can disrupt maritime traffic and energy supplies. That could prompt an increase in oil prices, which would benefit Iran.

There have been hints from the Iranian regime that it is considering negotiations with the U, S. Iran has a long habit of being especially badly behaved prior to any potential talks. This tactic worked well with the Obama administration to help get concessions.

While he would certainly like to make a better nuclear deal with Iran, President Trump does not want to be disrespected or intimidated in the process. But the mullahs don’t seem to have changed their strategy to fit the new sheriff in town.

The Iran nuclear deal approved by Obama did little to stop Iran from its goal of becoming a nuclear power because it had a fatal flaw. Sunset clauses in the agreement would have given Iran free rein to run a fully legitimate nuclear program in as little as a decade. The idea that the Iranians have any intention of making a deal that actually shuts off that path is pretty farfetched.

Still, President Trump is right to explore a new Iran deal – though with a very skeptical eye. But clearly – unlike Obama – Trump’s patience for Iran’s terrorist attacks across the Middle East has run out.

If the Iranians leaders are smart, they’ll realize Donald Trump is no Barack Obama and agree to real changes in their aggressive behavior in the region and a meaningful nuclear deal. Or the Iranians can raise the stakes and see if Trump folds. Obama always did, but Trump is a much better card player and knows he holds a better hand.