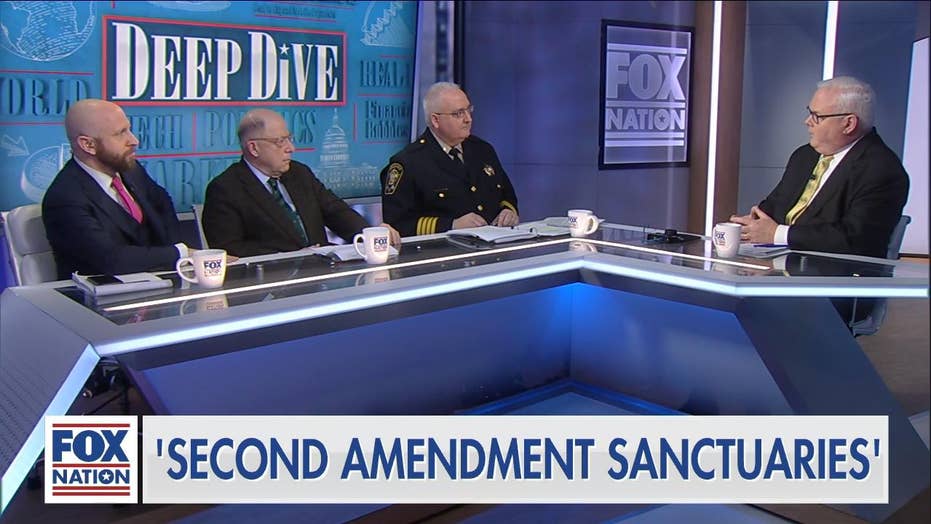 The organizer of a grassroots gun-rights movement in Virginia told Fox News Friday he has serious safety concerns ahead of a pro-Second Amendment rally in Richmond, even after Virginia Gov. Ralph Northam declared a state of emergency banning all weapons, including firearms, from the grounds of the State Capitol building.

On Monday, thousands of gun-rights advocates are expected to attend an event organized by the Virginia Citizens Defense League (VCDL).

In an announcement on Wednesday, Northam said, "State intelligence analysts have identified threats and violent rhetoric similar to what has been seen before other major events such as Charlottesville."

On Friday, Virginia State Attorney General Mark Herring asked the state Supreme Court to uphold the governor's weapons ban, after the VCDL filed an appeal to lift it. A Richmond judge had upheld Northam's order on Thursday.

Attorney and Shenandoah County board of supervisors member Bradley Pollack told Fox News that he is leading a group of about 30 people to attend the rally on Monday and said that "virtually everyone riding on our bus is concerned about safety."

Herring reportedly argued that Northam's order would help prevent a repeat of the deadly violence that occurred in Charlottesville in 2017 when white supremacist James Fields rammed his car into a crowd of protesters, killing one woman and injuring others.

Pollack said that Northam's order "makes some sense in the confines of Capitol Square," but he questioned how it would prevent the type of violence that marred Charlottesville.

"Where it gets a little more gray is outside of the Capitol Square," he said. "My concern is walking to Capitol Square without any sort of personal protection and police escort."

"What do people do when they walk from their vehicle or bus to Capitol Square?" he continued. "In Charlottesville, we saw a lot of hooliganism ... It's a conundrum. I don't know the answer."

Pollack added that armed police officers are expected to accompany his group, but he does not know whether they will be allowed to enter the Capitol grounds with their weapons.

Shenandoah County is one of more than 100 Virginia counties and cities that have passed resolutions declaring their commitment to upholding the Second Amendment after Democrats gained a majority in the General Assembly in November.

On Thursday, the Democrat-controlled state Senate passed three pieces of legislation to expand background checks, restrict gun purchases to once a month and allow localities to ban guns in some areas.

"People -- in rural counties especially -- they get a little upset when all of a sudden something that they could do one day," he said. "Then the next day it's illegal, that kind of strikes a chord."

On Fox Nation's "Laura and Raymond," Laura Ingraham noted that some of the proposed measures in Virginia will test the constitutional limits of gun control.

"The gun-control legislation being proposed is sweeping," said Ingraham, "This would ban many semi-automatic pistols and very popular magazines. Certain types of clips, the capacity of the clips -- in a way that just doesn't sit well with the historic population of Virginia."

"The pro-gun people say ... 'This is a federally guaranteed right that you cannot abridge in the way you're abridging it. We're sticking to what the Second Amendment meant in Heller.'"

"This is gonna go to the [Supreme Court]. There's no doubt about it," concluded Ingraham.

To see all of "Deep Dive" and "Laura and Raymond" go to Fox Nation and join today.