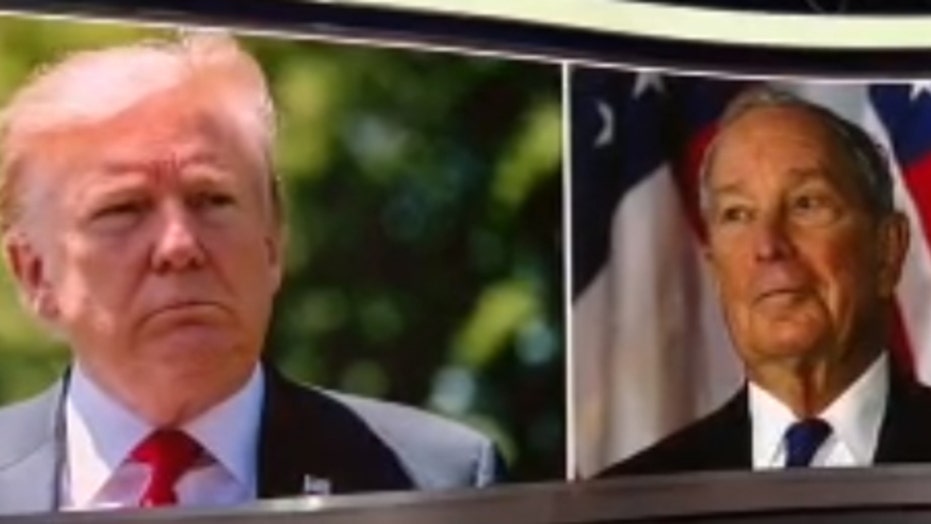 Harris Faulkner and Mo Elleithee, former DNC spokesperson, discuss the strategy behind the war of words between Michael Bloomberg and President Trump

New York Times reporter Maggie Haberman had a bit of a disagreement with a top adviser to former New York City Mayor Michael Bloomberg about whether the Democratic candidate is sensitive to President Trump's jabs towards his height.

Trump renewed his feud with Bloomberg on Thursday morning, mocking the 2020 candidate in multiple tweets poking fun at the mayor's size.

“Mini Mike is a 5’4” mass of dead energy who does not want to be on the debate stage with these professional politicians,” Trump tweeted. “No boxes please. He hates Crazy Bernie and will, with enough money, possibly stop him. Bernie’s people will go nuts!”

Trump also compared Bloomberg's 2020 bid to former GOP rival Jeb Bush's once highly touted presidential campaign: “Mini Mike Bloomberg is a LOSER who has money but can’t debate and has zero presence, you will see. He reminds me of a tiny version of Jeb 'Low Energy' Bush, but Jeb has more political skill and has treated the Black community much better than Mini!”

The post included a doctored photo of Bloomberg looking short. The president’s claim that Bloomberg is five feet and four inches is an exaggeration. According to reports, Bloomberg stands at about five feet, eight inches. Trump is reportedly 6 feet, 3 inches.

“We know many of the same people in NY. Behind your back they laugh at you & call you a carnival barking clown,” Bloomberg tweeted. “They know you inherited a fortune & squandered it with stupid deals and incompetence. I have the record & the resources to defeat you. And I will.”

Haberman weighed in on the feud by suggesting that Trump's repeated height attacks is actually a sore spot for Bloomberg.

"The height thing is one of the few things that actually bothers the candidate," Haberman said.

"The 'height thing' actually doesn’t bother Mike, Maggie. Size matters to Trump. But it’s the size of the deficit, the size of Trump’s ego, and the scale of our Constitutional crisis that do actually bother Mike," O'Brien told Haberman.

Haberman doubled down -- and even cited an example of Bloomberg's apparent weakness.

"I’m going to disagree with you as someone who covered him in his 2001 campaign and for many years after, Tim. Typically people who are not bothered don’t put down the wrong height on their driver’s license," Haberman said.

Haberman, who previously covered mayoral politics for The New York Post and The New York Daily News, referred to the moment when Bloomberg reportedly listed himself as 5 foot, 10 inches on his driver's license. Bloomberg's doctor said in December that the former mayor is actually 5 foot, 7 inches, a few inches taller than Trump's claim, according to a letter released by the campaign.