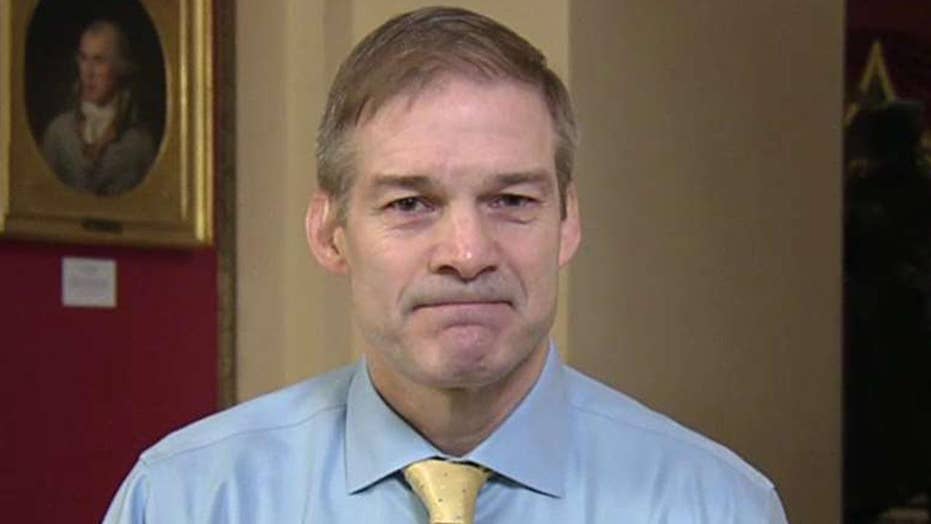 Rep. Jordan hopes impeachment gets dismissed quickly: 'The facts are on the president's side'

As President Trump finalized forming the legal defense team for his Senate impeachment trial, Rep. Jim Jordan, R-Ohio., said on Tuesday that he would be “happy” to be part of it.

“What I want to do is get this thing done and get on with the business of the American people," he added.

Several top White House lawyers are slated to serve in the defense team during President Trump’s impeachment trial, Fox News has learned, as the House prepares to send the official articles to the Senate as early as Wednesday.

During a speech on the Senate floor, Senate Majority Leader Mitch McConnell, R-Ky., chastised House Speaker Nancy Pelosi, D-Calif., and questioned her strategy for holding off sending the articles to the Senate.

Jordan credited Trump for boosting the economy with tax cuts in 2017, for “eliminating” top Iranian Gen. Qassem Soleimani and ISIS leader Abu Bakr al-Baghdadi, and for building an embassy in Jerusalem.

“All the amazing things he's done. I want to help with that. Help the president continue that amazing record. If it's part of being on his defense team daily, I’ll do it. But that's that's a call for other people," said Jordan when asked about the idea of him joining the legal team.

In a Democratic caucus meeting Tuesday morning, Pelosi did not announce which lawmakers will be tapped as impeachment managers – who serve as prosecutors – in the case. Fox News is told a House vote on sending the two articles of impeachment to the Senate is expected Wednesday, at which point more details will emerge on Democrats' plans.

Jordan said if Democrats want to hear from witnesses, then Republicans should get to call the whistleblower and others who did not testify during the House proceedings.

"I hope this gets acquitted and gets dismissed right from the get-go, we’ll see how that all plays out," he said.