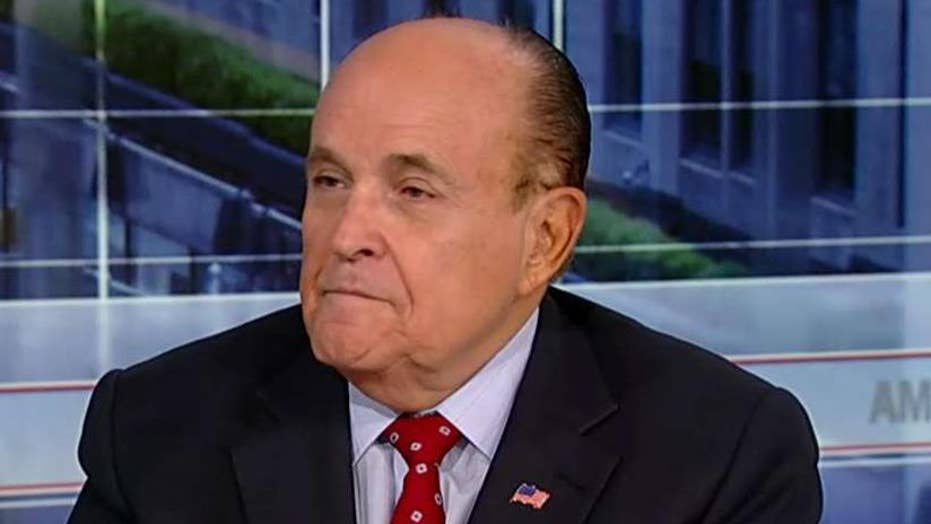 'There's absolutely no excuse for this,' Trump attorney Rudy Giuliani tells 'America's Newsroom' after the death of Jeffrey Epstein in his New York jail cell.

Former New York City Mayor Rudy Giuliani said Jeffrey Epstein's apparent suicide should never have happened at the facility where he was being detained and claimed the guards have no excuse for not monitoring him more closely.

"It's a jail rather than a prison. A jail is a place you hold people when they're awaiting trial. A prison is where you put them when they finally get sentenced. Those are more permanent places," he said Tuesday on "America's Newsroom."

Giuliani added, "There's absolutely no excuse for this. What happened here, to me, is mind-boggling. It's impossible to happen. It's a relatively small facility. This isn't Rikers Island... with many, many different buildings. One building. Almost everything is within view if you want it to be, of the guards... The guy was a high-risk prisoner, wasn't he? He's a guy that there are probably 50 very important people that have a motive to kill him... We know there are some people that are in a lot of trouble because of Epstein. They know who they are. There's tremendous motive to kill him."

JUDGE NAPOLITANO ON EPSTEIN SUICIDE: KEY QUESTION IS 'DID SOMEONE INTENTIONALLY LOOK THE OTHER WAY?'

He said Epstein should have been under 24-hour surveillance due to the high number of people who had plausible motives to kill him, and claimed he was already a target in prison for being an accused child molester.

"Prisoners don't like him. He's alleged to be maybe the most notorious child predator of our generation. Prisoners are strange. Perverts, they don't like. So they'll kill a pervert just to kill a pervert," Giuliani said.

"I don't understand how anyone can explain not having him under 24-hour surveillance or not checking the camera constantly... The camera wasn't working. There's a camera in every part of a prison. Every single telephone call in and out of prison is listened to. Prisons are prisons. Now the federal prison system, I used to be in charge of it in the Reagan administration and then I worked with it for 15 years... The federal prison system is the best in the world... It's hard for me to believe this could possibly happen."

He also said Epstein should have been under armed guard around the clock due to his fame and the horrid nature of his crimes.

"His room should have been guarded because there was every possibility some prisoner that got loose would get in there and stab him, kill him, choke him, make it look like he hung... He was the guy they most wanted to kill in that prison. Of all the prisoners there, he's the guy one of those prisoners would love to kill, just to have that on his creds. And probably nobody would turn him in if he did it. So he would feel a certain sense of protection," Giuliani said.

"You've got to understand a prison... The people running that understand it. It would be very hard for me to understand the explanation as to why this man wasn't watched 24 hours a day."