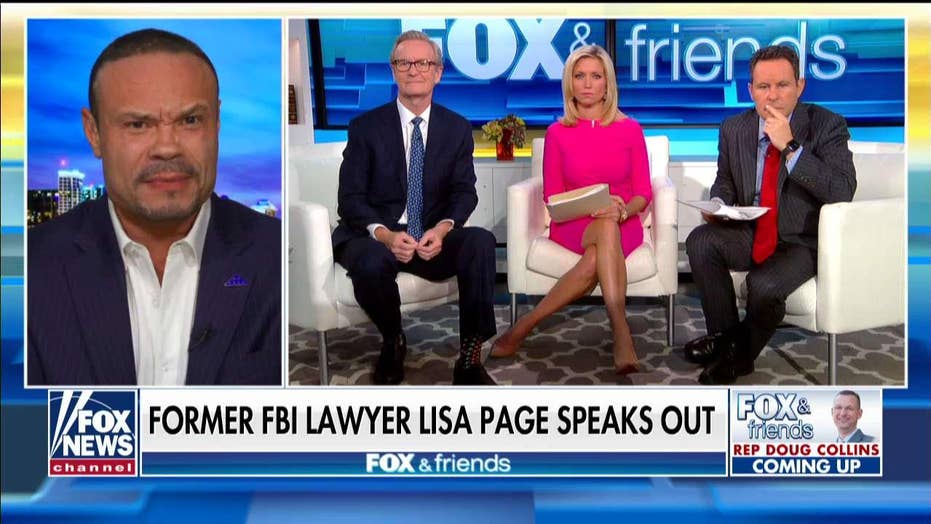 Dan Bongino: More evidence that the deep state 'is in a panic'

Former Secret Service agent Dan Bongino said on Monday that ex-FBI lawyer Lisa Page breaking her silence to push back on President Trump’s name-calling is more evidence that the “deep-staters” are in a panic.

“You understand the panic these deep-staters are in right now? That’s why they are coming out and doing these stories,” Bongino said on “Fox & Friends.”

In an interview published late Sunday, Page, the ex-FBI lawyer who carried on an extramarital affair with former FBI head of counterintelligence Peter Strzok as the two exchanged anti-Trump text messages, said she was breaking her silence.

“Honestly, his demeaning fake orgasm was really the straw that broke the camel’s back," she said.

The 39-year-old Page was referring to Trump's comments about her and Strzok at an October rally.

Trump performed a passionate, dramatic reading of Strzok and Page's August 2016 text messages, including Strzok's conspicuous promise to Page that "we'll stop" Trump from becoming president. At the time, Strzok was overseeing the Hillary Clinton email investigation and the probe into the Trump campaign.

Page spoke exclusively to The Daily Beast Sunday in a highly sympathetic profile authored by Molly Jong-Fast, who called Strzok "hawt" in a tweet last year. In the interview, Page said Trump's remarks had forced her to confront the president publicly.

“It's like being punched in the gut. My heart drops to my stomach when I realize he has tweeted about me again. The president of the United States is calling me names to the entire world. He’s demeaning me and my career. It’s sickening,” Page said.

Horowitz has reportedly found that an unidentified lower-level FBI lawyer falsified a key document used to obtain a secret surveillance warrant against a former Trump adviser.

But Page claimed that Trump's "fake orgasm," and not the pending IG report, was the reason she decided to come forward.

Bongino, a Fox News contributor, said Trump and his supporters are also "done being quiet" and are eager to see Horowitz's report on potential abuse by the FBI in starting the Russia investigation.

"She was the lead FBI lawyer on the biggest political spying scandal in human history. ... You’re upset that the president hurt your delicate sensibilities by calling you a name? Is this serious?" he asked, noting that Page testified under oath to lawmakers last year that she told Strzok that Russian collusion suspicions against Trump could have been "literally nothing" even as Bob Mueller was appointed to investigate.

Fox News’ Gregg Re contributed to this report.