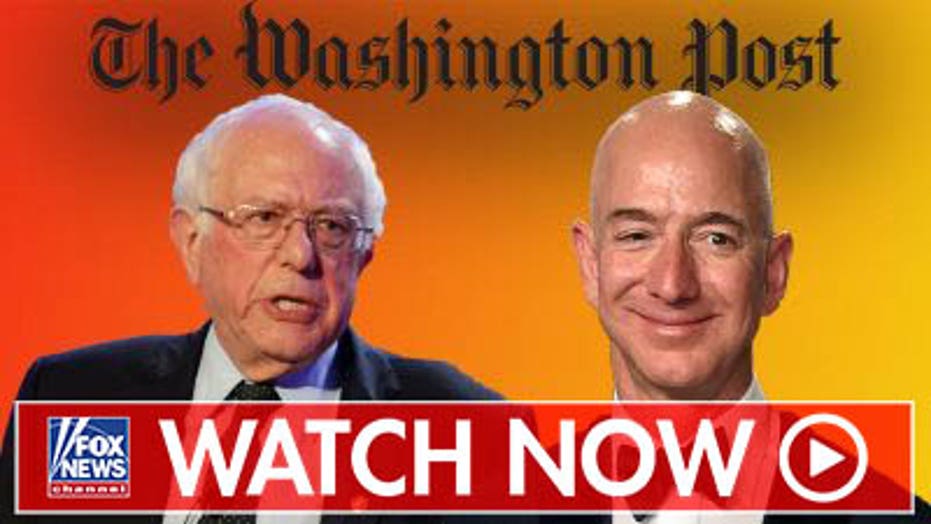 One of the leading Democratic presidential candidates, Sen. Bernie Sanders, I-Vt., is criticizing Amazon and The Washington Post in a manner that echoes President Trump, according to Ari Fleischer.

Both the president and the Vermont lawmaker have criticized the two entities' common owner, Jeff Bezos, Fleischer said Tuesday on "The Daily Briefing."

SANDERS CLASHES WITH WASHINGTON POST ON COVERAGE, AS EDITOR ACCUSES HIM OF PUSHING 'CONSPIRACY THEORY'

At a Monday campaign event in Wolfeboro, N.H., Sanders took a swing at the online marketplace and the famed newspaper.

"I talk about [Amazon's taxes] all of the time. And then I wonder why The Washington Post, which is owned by Jeff Bezos, who owns Amazon, doesn't write particularly good articles about me. I don't know why."

Later, The Post fired back at the 2020 hopeful, with reporter Felicia Sonmez reiterating that Bezos "does not interfere with or influence the newspaper's coverage."

In the past, Trump has called The Post, insisting that its stories aboutim were wildly "inaccurate."

He also previously referred to Bezos as, "Jeff Bozo."

In his interview with Dana Perino, Fleischer said he saw Sanders as an "outsider candidate" similar to Trump during the senator's first presidential run in 2016.

He added that Sanders often criticizes corporations and wealthy executives, and that his comments about Bezos mirror that.

"Politicians always do complain about their coverage, but Bernie has always thought corporate ownership of things was bad and led to nefarious activities," he said, claiming the candidate has added a "socialist" quality to his complaints.