'World's hottest grandmother' raising money for Australian wildfire relief: 'It's the least I can do'

The “world’s hottest grandmother'” is allegedly stripping down for a critical cause as she fundraises for the national firefighting effort in Australia, where dangerous wildfires are causing chaos.

On Wednesday, Gina Stewart, 49, shared a sizzling offer with her 14,300 followers on Instagram. For every $10 donation, the Aussie woman pledged to send a free link for “premium content” – reportedly featuring sexy snapshots – through the website Only Fans, The Sun reports. The funds will benefit various firefighting organizations and charities including the Australian Red Cross Blood Service, the Salvation Army and WWF Australia, Stewart said.

“You're absolutely gorgeous. I'm very sorry that your country is on fire,” one user commented.

ADELE'S WEIGHT LOSS REPORTEDLY CREDITED TO SIRTFOOD DIET: WHAT IS IT?

“Great smile, who would not want to help you [?]” another agreed.

The proud grandma, meanwhile, said she’s simply doing her part to help out.

"It’s the least I can do,” Stewart said of her crusade, per The Sun. “My brother is an actor down in Sydney, he’s been working every day as a volunteer firefighter. His house has been really close to the firefront — so he’s literally fighting for his community."

In an Instagram update posted Thursday, the mother of four thanked fans for their continued support and “thousands of dollars” in donations.

“So much love and gratitude to all of you who are helping with your amazing kindness and generous donations. We are making a difference and that’s what it’s all about, mostly to the wildlife charities in the form of thousands of dollars that is pouring in all night and all day as direct donations,” Stewart wrote. “So thank you all kindly from the bottom of my heart, it’s an overwhelming response.”

Stewart, who shot to stardom during the Maxim’s Finest Australia contest in 2018, has previously made headlines for sharing particularly risqué photos on social media.

In a similar fundraising effort for the Australian wildfires, one outspoken Instagram model claims that the social platform recently shut down her account after she decided to sell naked photos of herself for the cause.

A new set of evacuations was ordered Thursday in parts of Australia as hot and windy temperatures are forecast to bring "dangerous, dynamic" conditions that may further fuel fast-spreading wildfires. 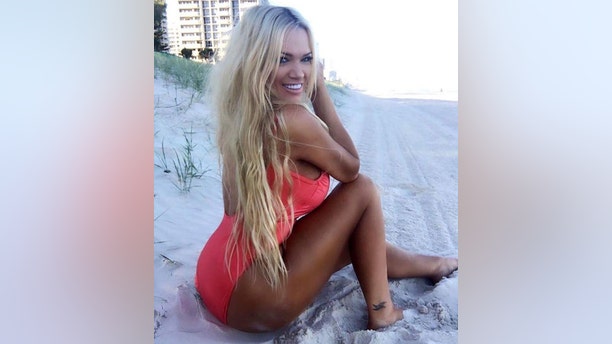 The “world’s hottest grandmother'” is allegedly stripping down for a critical cause as she fundraises for the national firefighting effort in Australia. (Gina Stewart/Instagram)

The New South Wales Rural Fire Service urged the communities of Nowra, Narooma and Batemans Bay, located south of Sydney, to evacuate over fears that northwesterly winds were likely to once again drive blazes toward the coast. In neighboring Victoria state, fire-threatened populations were urged to act quickly on evacuation warnings.

“If you can get out, you should get out,” Andrew Crisp, Victoria's emergency management commissioner, told reporters. “Because tomorrow is going to be a dangerous and dynamic day.”