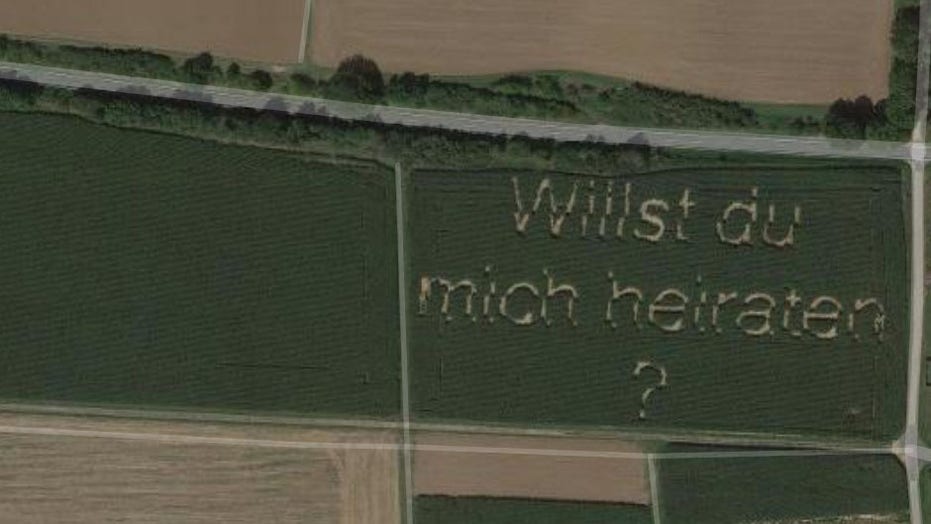 Thankfully she said yes, because this would’ve been a lot of work for a “no.”

When people are planning to propose to their significant other, they often want to do something special. Nothing says “special” like having a moment that’s noticeable on Google Maps.

Steffan Schwarz told BBC that he used a seeding machine to spell out the message. (Google Maps)

That’s exactly what happened to one couple from Germany. Last year, Steffan Schwarz proposed to his girlfriend using a cornfield, BBC reports. Using a seeding machine, he planted the cornstalks in a way that they spelled out the words “Willst du mich heiraten?” which translates to “Will you marry me?”

He says he had his girlfriend watch the footage as he flew a drone over the field in order to pop the question.

“At first she couldn't see it because the drone wasn't flying high enough. But when she realized, she said yes immediately," Schwarz told BBC.

For the time being, the future Mr. and Mrs. can relive their happy moment anytime they look at an aerial view of their town on the popular map website.

Schwarz told the news outlet that he and his fiancé plan to wed in June. The groom added that he plans to use a drone during the ceremony to take photos.