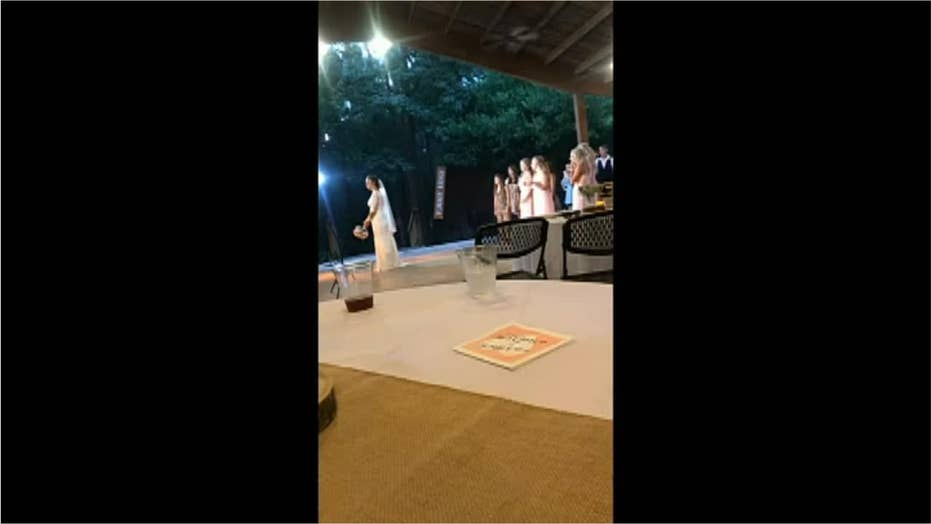 Wedding guest flees reception after his girlfriend, of 5 years, catches the bride's bouquet.

Hilarious footage of a bridesmaid’s boyfriend running for dear life after his girlfriend caught the bride’s bouquet at a wedding has gone viral on Facebook, racking up over 11 million views to date.

Earlier this month, Haley Marie Skipworth served as a bridesmaid at her friend’s wedding, and brought her boyfriend of five years, Nathan Jordan, as her guest, The Sun reports.

In a 30-second must-see clip that Skipworth, 20, recently shared on social media, a group of gown-clad bridesmaids jockey to catch the bride's bouquet as Lenny Kravitz’ “American Woman” blasts in the background. In an instant, the bundle of blooms seems to fly directly into Skipworth’s hands.

Just after the bouquet hits Spikworth's hands, however, Jordan can be seen sprinting away from the outdoor wedding reception venue toward the parking lot. He then leaps over a fence, hops into his large pickup truck and drives away – evidently fleeing his fate, as tradition suggest that whoever catches the brides’ bouquet will be the next to marry.

The shocked gaggle of bridesmaids, meanwhile, pointed and giggled at the funnyman’s unbelievable stunt.

“Always the bridesmaid, never the bride," Skipworth, who lists on herself as a student at Auburn University on her Facebook page, joked of the now-legendary moment.